Share All sharing options for: The Neymar links just won't go away

And they probably shouldn't given what we've seen of this kid. 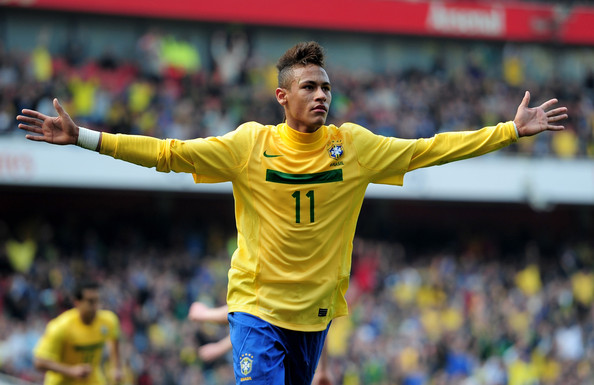 Primed to cash in?

Neymar gave Chelsea the figurative middle finger nearly a year and a half ago following a protracted courtship that featured all the winks and blown kisses one could ever ask for. Well, at least that is what Santos wants us to think happened.

Regardless of who wanted what last summer, the whole ordeal turned out to be a long, fairly dull and, ultimately, a waste of our, as Chelsea supporters, time.

Needless to say, the kid has remained within the club's scope and for good reason. The 19-year-old has been toying with opposition on a regular basis, this time without offending an entire country or blowing up in a manager's face. And now, after shoving a banana in the proverbial tailpipe of the Scots via a marvelous display at the Emirates over the weekend, the wooing has resurfaced.

This time, however, it's Neymar doing the talking.

The kid told Sky Sports: "Chelsea's a great club. It's a dream of every player to play at Chelsea. If one day it happens, I will be very happy to come. When the moment comes we are going to sit with my family. We are going to think about it and discuss the options.

"Last year, when Chelsea came, we sat together and we thought it wasn't the time yet. If it happens this year, we are going to sit again and are going to discuss about it."

Alright then. What to make of it?

Well, after that initial saga, I'm not going to make anything of it. Sure, Neymar is a wonderfully talented young player with a potential curve difficult to match on the world scene. Would I take him at Chelsea? Please. The real question is why wouldn't any club want a player with this kind of upside.

But I'm not going to pretend like this is a formality. Far from it. Still, this appears to be, on the surface, a promising development in the club's pursuit of talented young prospects. More specifically, Brazilian prodigies. Ramires, Bob, Piazon more recently - we're on a serious Samba kick. I, for one, am enjoying the South American flavor - and the accompanying beauty that is their female counterparts.

Back to Neymar. I'm still unsure if he will even move abroad after this season. Santos president Alvaro Ribeiro de Oliveira is talking a large game, at least.

"Playing in England is not the same as playing in Vila Belmiro. It is much worse, because of the climate and the style of football which he is unaccustomed to. We have demonstrated that, as he has developed into a player who represents the best of Brazilian football - being audacious, skillful, effective, attacking- he is going to become a key figure in the history of Brazilian football," he told ESPN, while reiterating that the club is not interested in cashing in on the new face of Brazilian football.

Sure you aren't. I'm also fairly certain that Liverpool weren't interested in moving Fernando Torres. An obscene amount of money seems to rearrange outlooks. And, with Roman apparently in a generous mood, a move for Neymar could easily be completed. We'll just have to wait and see.

Bonus: A couple of moving pictures featuring Neymar. The first is his exclusive interview with Sky Sports. The second, meanwhile, is an abbreviated highlight package of his work against Scotland. Enjoy.