An Open Letter to Jose Mourinho

Share All sharing options for: An Open Letter to Jose Mourinho

You own our hearts. You continue to tease our minds. You have your way with the press, seemingly on a whim. You will forever be considered a legend at The Bridge. You are, in many respects, the GOAT. But damn you for what you're about to do. 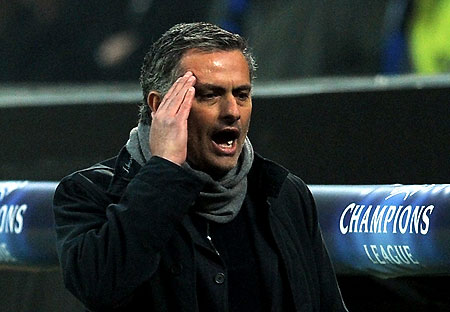 It's no secret that you want to come home. England, as you've said many times in the past, is home. I get it, I really do. It's hard to manage Real Madrid- even for you. That you're probably going to end the season without silverware is probably a good enough reason to get out of dodge while you still can salvage some pride. After all, you're the 'Special One'- how could a man of your stature fail to win a trophy with a team of demi-Gods, we wonder? Well, I'll just wait until June for your well-thought-out explanation.

True to script, it'll feature the following ingredients: a backhanded slap at the club's directors, whom you'll insist get in the way of the 'football' side of affairs, perhaps a derisory comment or two about the Benzema's and Adebayors of the world, hell, there might even be a thinly veiled barb about the press somewhere in that swan song. But, we all know the icing on the goodbye cake will feature what you're most accomplished at: a magnificently grandiose ode to the fans you're about to stab in the kidney.

Let me be clear, Jose. I love you. Hard. But you can't deny you're quite convincing at getting out before the blood hits the ground. True, you got run out of SW6 before the dust settled, and yeah Roman might have been a bit of a pain to deal with. But hey, you've done well for yourself in the process. You went to Italy, and got your Champions League on. You did the domestic double, and in the process made some new friends. Hell, you got a fucking tan too. Then, when you got bored, you fucked off to Spain to try your hand at managing the most expensive clutch of footballers since that one time I created a SuperTeam in FIFA 97. But now you're bored again, feeling unappreciated, and perhaps in need of an ego-boost. So naturally, it's back to England you come!

But you're not coming to Chelsea. No, you're not coming back. Roman won't sanction that shit, because that would require him to eat crow, and in case you've forgotten, Roman don't play. No, you're just using your relationship with the club, the players, and the fans as leverage. Leverage, mind you, to soften the realization that you're actually pining for the one seat in Manchester that could be available, or could not be. Not that we're upset though. I think it's fair to assume that we're finally 'over' you. Even though we've had a torrid time at moments this year, and even if the media refuses to let sleeping dogs lie, we've done well in your absence. So no, we don't need you anymore bro.

And if this is true, that you're actually attempting to snatch the hot seat at United, which would make sense in your quest to manage the great clubs of the world, then you're about to commit a horrible sin that suggests your ebullient love of the fans you've represented is all a ruse. It's not about love, it's not about money, it's not even about the football on display. If it's true Jose, then you're validating your hypocrite credentials. You don't care about tradition or rivalries, you just care about you. And to that end, you'll throw away whatever good will you banked whilst at Chelsea in favor of another afternoon under the bright lights.

Let me be clear, I love you. I really do. But you're going to break a lot of hearts if these rumors are true. And if it's not, assuming you're just posturing to get more cash from the Madrid hierarchy, then you're no better than Wayne Rooney or Carlos Tevez. The very players you came out against earlier this year. Whatever decision you make, Jose, remember there are ramifications. You're going to go out on a huge limb and gambit that the respect you've garnered over the years can withstand the pressure of being under the spotlight once again. Though you're technically famous enough to always encourage that kind of scrutiny, you're been removed from the English journalistic machine for a few years now. It's gotten nastier, more salacious, and ultimately more ruthless. Are you prepared to handle the weight of such expectations?

Are you convinced you're capable of replacing Sir Alex? You won't be given the luxury of time to develop a rhythm, or implement a new system. You might have cash to spend, but time won't be your friend. You're gonna have to make shit happen, fast. And if you thought it was tough at Madrid, or unfair in Italy, you best be prepared for what's in store. This would probably be your final destination, and the one job that will crystalize your reputation and credentials. You won with Porto, you won with Chelsea, you won with Inter, the jury's still out on your Madrid tenure, and assuming you fail to win this season, then your United term will be the redemption song of your career.

I warn you though, friend to friend, admirer to 'Special One', that there's a chance you could be out of your league on this one. SAF, for all his strengths and frustrations, is damn good at what he does. You too are pretty awesome, but he's been doing it since you were kicking around the Portuguese second tier. He's not an easy bloke to replace, but you already know that. I think that's what makes this so exciting for you Jose, that you'd be the one to step into his shoes, and take on the responsibility of steering United to glory post-SAF. Maybe I'm reading too much into this, but I'm guessing this one is keeping you up at night. If you're not already pondering the formation concepts for your CL fixture against the mighty Spurs, you're certainly wondering just how realistic of a chance you have to get this job.

So you're sending out feelers to the media. You're posturing, you're saying the word 'love'. You're convincing a lot of us that you're really into the idea of coaching in England again, but then again you're doing a bang-up job of saying the right things to the Spanish press about Madrid. I don't know who to believe, so I'm writing to you Jose, to clear this up once and for all. As a Chelsea fan, I'd be gutted to see you on that touchline, in a red tie. Gutted. But I know it's a business, and there's no such thing as loyalty anymore. I know that's a foregone concept of years past, and that really I should be wiser than get caught up in the romanticized affectations of being a blinded-by-blue CFC supporter. But fuck if it wouldn't make me sick to my heart to see you, in one of your well-tailored suits, stoking the fires and doing your chin-up routine.

The mere idea of watching you on an English pitch, as anything other than a visitor, would boil my blood. I'd hate you, Jose. I'd despise your children. I might even consider you the next Judas Cole. I might burn an effigy of you in my backyard. I might do a lot of things, Jose, a lot of crazy shit. Or I might not. Either way, you have that sort of sway on people, and you know this. It's your greatest strength, connecting with us- the fans. You hold our hearts in the palm of your hand, whether you're currently coaching our squad or fucked off in another country but continuing to send love our way in the most unorthodox of fashions. You, ultimately, have a lot of power. And you know this.

You know this. Which is why what you're about to do this summer, can never be forgiven.