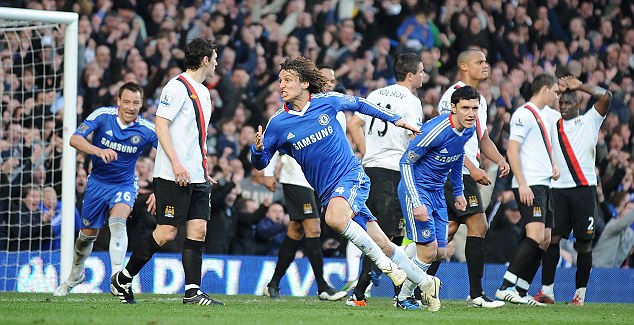 The King of Stamford Bridge?

Well, where do we start? On a day that pitted us against the one team Carlo couldn't seem to shake during his reign as Chelsea's imperio, the boys in blue put together a commanding display, grabbed the three points on offer, and moved up the standings to third place. Not bad for a day's work.

**Editor's Note** - It's been a busy week at The Offside for your loyal scribes, and I in particular am hot off the heels of an eye surgery on Friday. So bear with me as I try and write as much as I can before my eyes tire and give me fits. It was hard enough to keep them focused on the match to begin with.

Carlo elected to start with Nando T and Sala up top, utilizing our now favored 4-4-2 formation, with Flo, Lamps, Essien, and Ramires filling out the midfield, along with Ash, EBALJT, Bob, and Bane at the back. I'm not the only one that was a bit confused by the Kalou selection, but it proved to pay dividends almost immediately, with the first clear chance of the match falling to the Ivorian, who regrettably took a tumble over Ramires before managing to pull the trigger on a shot. Meanwhile, Mancini elected to pack his midfield with as many trees as he could muster, deploying newbie Edin Dzeko up top in a lone attacking role. Anyone expecting Roberto to go for the gusto and play a more attacking formation, well, you obviously haven't been watching City much this season.

Anyway, the match was off and running and the majority of the dirty work early on was happing in the middle of the park. The 4-4-2, for all its strengths, leaves plenty of gaps for offenses to exploit on the counter. As the weeks progress, we seem to be getting better at closing these opportunities down, but we had a momentary lapse in the 11th minute that offered Yaya Toure a chance from the edge of the box (in virtually the same spot Rooney managed to drill his against us a few weeks ago). Same shot, different ending - Big Pete don't play. On this afternoon, it seemed as if the match would be fought somewhere between both sides of the pitch, and indeed it was.

The 13th minute presented Sala with the first Chelsea opportunity to draw blood, but he was unable to get his feet in place. Mancini's plan of holding the blues at bay seemed to work to great effect, as City's 5-man midfield offered limited chances to push forward, save for another Kalou chance towards the end of the half - which he only could manage to fire directly into the waiting grasp of Joe Hart. 45 minutes in, and Chelsea clearly looked the side more deserving of a goal, having dominated possession and demonstrated a more forward-thinking approach.

The second half kicked off in similar fashion, with no changes to either side on offer. Chelsea, the more determined bunch, put together a few flowing passing responses, including a lovely set-up from Nando to Malouda to Kalou to Malouda to..... the outstretched hands of Joe Hart. In many ways, it was a familiar song that we've seen at the Bridge this season. Bane popped up on a corner kick to head the ball into an open space, goalbound, but had the misfortune of blasting his shot directly off the Goblin-shaped dome of Kompany. A collective sigh and groan let out across the Bridge with that effort, and many of us began nervously anticipating a bore draw. But on this day, it would appear, Carlo had a few tricks up his sleeve.

There would be no birthday blessings for Nando this time, as he and Flo were replaced on 70 minutes by the original striking partnership of Diddy Droggles and Nelks. Both players came onto the pitch and provided immediate life to our attack, offering newfound pace and steel up-front to challenge City's big boys in Kompany and Lescott. On 77 minutes, Carlo introduced Yuri-dinho to replace Sala, and within a minute of his stepping on the pitch, the tide would change. Bob, he of legendary skill and power, did his best Cristiano impression, dancing and wheeling on the left side of the pitch and eventually earning a free kick for the club in dangerous territory. Camera's fixated on EBALJT, calling out signals and instructing players on where to attack the net. The result? Well, who else, but Bob would come up with the HUGE header and goal.

By this point, Mancini had no choice but to throw on his remaining attackers, introducing Adam Johnson and Mario Balotelli to attempt and put some pressure on the Chelsea back-line. But it would not be their day, and in stoppage time, Ramires, part two of the Benfica equation, would put the match to rest with a lovely bit of individual skill and class to slot home and secure the three points. Boom.

Cech - 7 - Didn't have a lot to do, but when called upon did his job well. One clutch save in the first half, a few smart receptions in the second half was all she wrote on this afternoon.

Cole - 7 - Usual understated excellence from the best left-back in the world.

EBALJT - 7.5 - What more can be said? There is ONLY ONE ENGLAND CAPTAIN, and on this afternoon, he demonstrated why and lead by example. Shook off a dead leg in the second half to continue leading the charge, and continues to work very well with Bob.

Bane - 6.5 - His offensive performance was subpar, but his defensive display was strong as per usual.

Lamps - 6.5 - He wasn't able to put his imprint on the match, persay, but he did manage to continue the forward flow on occasion and stuck his foot into more than a few challenges defensively. I don't think the 4-4-2 is the right formation for him to spring forward and launch 20-yard shots. But a win's a win, and I doubt he'd complain.

Essien - 7 - He did all the dirty work off the ball, and I loved it. The return of the Bison, it might not be, but on this afternoon he was strong, and took the challenge directly at De Jong and Toure. Never backed down from a challenge and launched the attack forward with some excellent forward passing. More.

Ramires - 8 - He too could be a Man of the Match candidate, but the afternoon again belonged to Bob and his magical ways. Again, some incredible stuff that just makes you thrilled he's ours for years to come. That goal? Sublime.

Flo - 6 - My least favorite contributor, if I had to pick one, but he did enough to merit some semblance of praise. Still, he's sitting on the ball too much and needs to move it quicker forward to the strikers, I believe.

Sala - 7 - Lively. Created plenty of chances in the 1st half, and did well to reward the confidence of Carlo for starting him ahead of the gruesome twosome. An understandable substitution in the second half, but overall a solid demonstration.

Diddy - 7 - Yes. This is the man I expect to see when he steps on the pitch. Powerful, forceful, commanding, imposing. Whatever adjective you want to use, he was all of that and more. Inch perfect cross to set up the first goal for Bob, great control and touches in the midfield, and strong defensive support culminated in an excellent display from the Ivorian.

Nelks - 6.5 - His pace is vastly underrated I believe. An effective cameo wherein he used that speed to continue applying pressure to City's backline.

Yuri - 6.5 - Had a lovely forward run that found him scamper some 30 yards and wind up unmarked in the box, but he couldn't pull the trigger or get the shot off in time. Good stuff again from the Russian.