It's very hard to put a button on this one - to find the perfect sequence of words to summarize what was, without question, our most impassioned display of the season. For one night, the Blue Army channeled the glory days of lore and put on a powerful showcase for all to behold. The result, a resounding win against a very competent Manchester United side, and three vital points in our ever-evolving quest to improve. And oh, perhaps the coronation of a new King at The Bridge? 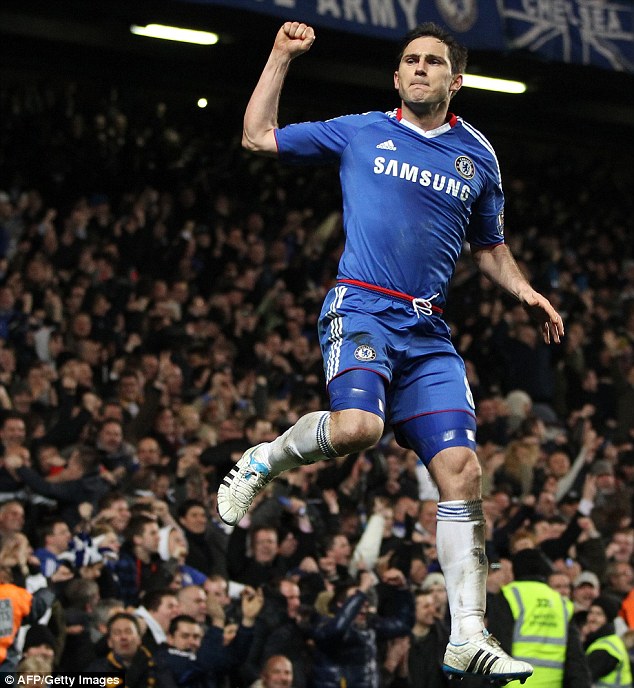 I believe Frank can fly.

On the 5th Anniversary of the passing of the legendary Peter Osgood, Chelsea summoned their best 45-minute performance in a second half full of end-to-end action. Well, that's not entirely honest. The whole match, it seems, was rife with marauding runs forward for both teams. It was an exciting affair to the casual observer, but an absolute treat to fans around the world who, so often, are left disappointed by the quality of football on display when to 'top-tier' clubs do battle. But this, my friends, was nothing of the sort. This was aggressive from the kick, a tenacious back-and-forth full of chances and brilliant individual performances. Five years on, we mourn the loss of the King. But on this night, a coronation of sorts took place for our less heralded import, Bob, aka David Luiz. I'm still gushing about how remarkable the kid is, so I'll leave it to Jack to give you the truth on what Luiz is all about: 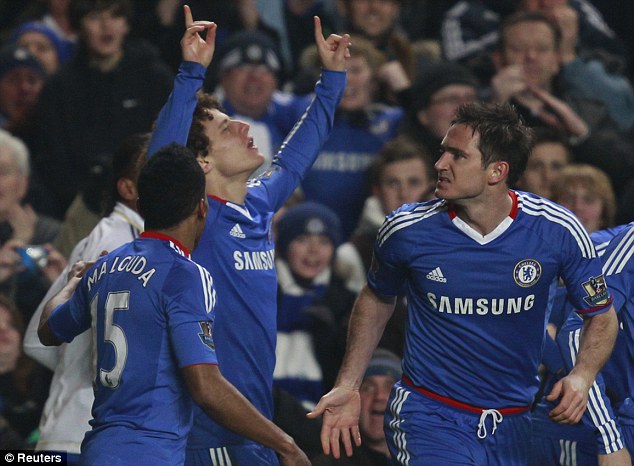 The King is Dead. Long Live the King.

What about Bob? The kid is some kind of special.

How many players, young players at that, can come into a side of Chelsea's stature, chock full of world class internationals with world class egos, and make such an impact? Few, if any. Bob has played three games for Chelsea -- three games - and has already managed to do the unthinkable, stamp his own personality on a team filled to the brim with personalities.

On Tuesday, the Brazilian was an irresistible force. In defense, both incisive and uncompromising. Bob takes no prisoners - just ask Little Pea and Wayne Wayne. Sure, he was lucky to remain on the pitch, no argument from me. But that kind of steel, that kind of unrelenting passion, is just what this aging side desperately needs. Then there's his offensive repertoire, equally superb. Forays forward were frequent, many were effective. His half-volleyed goal, which served as the platform for our breathtaking rally, was of the utmost quality. How Fernando Torres - improving every game mind you, and soon to explode - must've wished that was his first goal for the club.

Regardless, this day belonged to Chelsea. And Luiz. To think, I questioned the idea of this transfer prior to its completion. That, my friends, was dumb. This kid, on this evidence, is worth every penny and every piece of frustration it took for us to pry him away from Benfica. Long live the Bob....

....now that you all agree that we have massive man-crushes on Bob, we move on to some additional salient points from the match.

Regrettably, Nico was not at his best against a stingy United midfield that offered little in the form of space to run at their defenders. The end result, a lot of passing from East to West, but very little in the way of the North to South attacking approach that we required. To get back in the game, and to supplement our upswing in momentum post-Bob's equalizer, Carlo introduced Didier to provide a much-needed boost to the squad. Vidic and Smalling, often untroubled by our lack of a dominant center-forward presence to hold the ball in possession in the first half, seemed to struggle to adapt to Drogba's presence. And the man was dialed-in from the jump. He encouraged the fans to get louder during critical intervals, he fought for every header, he worked well in his passing game with Torres, tracked back and provided midfield outlet passes, and managed to keep his head and avoid any untoward fouling. His brightest moment, in my eyes, was a five-minute stretch at the end of the match, wherein Didier decided to play a game of keep-away from the United backline - parking himself next to the corner flag and utilizing his sheer mass and strength to hold off the encroaching advances of Vidic, Smalling, Rafael, and O'Shea. On this night, Didier staked a claim for his continued involvement in the side. To determine what role that will boil down to continues to be Carlo's most daunting task ahead.

Yes. The Russian is back in form. By form I mean managing to earn the club vital penalties. He did this at least twice last season, to great effect. So I was not surprised in the slightest when Atkinson awarded the penalty in the 79th minute. After all, Yuri has a knack for hitting the ground and making it look legit, even if the contact is suspect to say the least. Bias aside, I do think this was a clear penalty, but a harsh one nonetheless considering Smalling had little room to react. Such is the game.

Beyond the penalty, Yuri gave the side a more direct left-sided attack, staying close to the touch and pushing directly at United's defenders. Whereas Flo was drifting inward and holding onto the ball longer than most would like, Yuri made it a point to increase the tempo and push out as often as possible. The result was a more effective Chelsea side that offered continued threats to VdS and the United defense until the dying embers of the match. Bravo.

Some other key observations from what I'm considering an instant-classic:

- Carlo's substitutions, often panned in this space by all of us, were spot on. Spot freaking on. Can't fault the guy when he, gasp, manages to outmaneuver Sir Alex.

- United were good, nay, great in the first half. Watching them move the ball from side-to-side so effortlessly was very impressive. Though we spent a lot of time pushing forward, fair play to United for keeping us honest. That Rooney goal? Pure class. But the second half was not United football. A lot of credit can be given to Chelsea changing the tempo and dictating the flow of affairs. Good teams manage to leave their impression on the match, but great teams ultimately play their style regardless of the opposition. On this night, United won the first half handily, whilst Chelsea bulldozed the second half.

- Nani v Ivanovic should be the next UFC Undercard. I'd pay to watch that, six times.

- Gary Neville bought a ticket to watch the match. What, United couldn't spring for an extra seat near the bench for a guy that literally retired three weeks ago? Just sayin'...

- Fernando will get there. Be patient, he'll break his duck soon enough. Though, he does need to stop being so friendly in front of the net and take his chances (including the two he opted to pass on in the final two minutes of the second half).

- Sir Alex fuming over a missed call on Tuesday after selecting to ignore the atrocious Rooney elbow from Saturday is appalling. But then, I'd expect such cynicism from a Manager of his pedigree.

- Frank's right, we're not all the way back by any means. But two big wins on the trot in the Champions League and the Premiership will do wonders to give life to the squad heading to Blackpool on Monday night.

- How can I neglect to comment on Ashley Cole and Ramires. The former, was defensively sound and rose above the weekend's lambasting to put in a solid shift. Though he was limited going forward, he stuck to his responsibilities and did well to corral the 'Nani Experience'. The latter, was brilliant. Without a doubt, our best player since January, and perhaps, our best midfielder this season. Marauding runs forward, crunching tackles, the whole package on display once again. Rose to meet the challenge of a marquee matchup and passed with flying colors.

Based on a scale you say? Why not, let's do it out of ten. No fists, however. I leave such grading tools to Jack and his infinite sage wisdom.

Petr Cech - 7 - There was nothing more he could have done to stop Rooney, save for a slight position adjustment. Still, not at fault. Composed and did well to make some key saves in the second half. Came out well on set pieces and controlled the box all night.

Bane - 6.5 - He gets a slight deduction in points for the needless yellow card for his non-stop duel with the 'Nani Extravaganza' (please note, this is now the official Chelsea Offside nickname for a player whose step-overs and blatant theatrics are something you should witness on a stage with technicolor and dreamboats). Had his hands full all night so limited in his ability to involve himself with the offense. Sturdy stuff.

EBJT - 7 - Dare I say, a calming influence next to the kamikaze-like Luiz. Gave good cover along the left for Ash, handled his challenges comfortably, made some poor passes during a brief stretch in the second half, but otherwise met the responsibilities of the day with comfort.

Ash - 7 - Usual solid stuff from the best left back in the world, regardless of what Efan Ekoku thinks.

Essien - 6.5 - Missing in the first half, his influence on the match grew in the second half. Shades of the old Bison were starting to surface. More, please.

Lampard - 7.5 - He's getting there, folks. Recall, he spent a lengthy stretch on the sidelines not too long ago, so he's finally getting into mid-season rhythm. With that, the passing gets crisper, the shooting stronger, and the result is the usual Franky Lamps type of stuff we've come to take for granted. That penalty? Atlas approved.

Anelka - 5.5 - One good, one bad. He was not in his stride on this night and thus, receives my nomination for Worst of the Night. Alas, there will be better days for Le Sulk than this one.

Nando - 6.5 - This is a process, folks. And though he's yet to score, he looked lively throughout. Not disappointed in the slightest, to be honest. The goals will come.

Didier - 7 - Seal of Approval. Tenacious stuff throughout. Welcome back, Ivory one.

BAWSE - N/A - only 9 minutes to evaluate, and not much at that worth mentioning, save for a nice one-two passing sequence with Ramires in extra time.

Yuri-dinho - 6.5 - Gets and extra half point for earning the penalty. Give him a start against Blackpool then, Carlito.