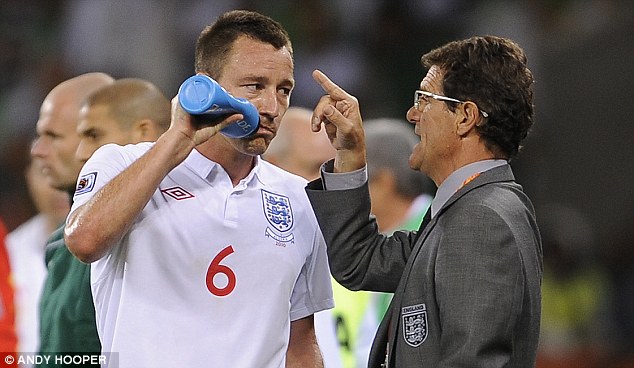 I need a favor, broseph..

We did this. Or so I'm convinced.

True or not, it's rather vindicating to see the latest rumors put Capello in yet another bind with regards to his captain issues, or lack thereof. It seems he's run out of second-string leaders to masquerade as top dog, so he's decided to finally give it back to England's Brave ahead of next weekend's vital fixture with Wales.

Almost a year after he was rightfully stripped of his position, the FA apparently are on the verge of a handing the armband back to John after a string of excellent performances, coupled with Capello's realization that Gareth Barry, Rio Ferdinand, Steven Gerrard, Wayne Rooney, Michael Dawson, and countless others are not fit to lead the charge. Took him long enough.

There's plenty of mea culpa's and hypocrisy going around. Martin Samuel has changed his tune from a year ago, taking to his op-ed to instruct Carlo to appoint the "only natural leader the team currently has in it's ranks." You'll recall, Samuel is one of the chorus of writers that took to their iPads in fury to criticize, condone, and insist on the execution of all things John Terry last year. Piers Morgan wrote how it was "all over" for John at the time, and how Capello needed to turn his hopes to Wayne Rooney, a player that was "as saintly off the pitch these days as he is devilish on it." Cue the laughter.

But I digress. The implications this would have on John's Chelsea responsibilities are non-existant, so nary you worry about how this will impact the squad heading into the end of the season. If anything, it might give EBJT a further injection of life and passion, which could stoke the fires at home and lead to a revitalization of sorts? Wishful thinking perhaps, but I can't really find a downside to any of this. For almost a year, we've been laid bare in the press about how our meandering, philandering, womanizing players were the worst of the lot. So you'll forgive me if I find it fun watching them eat shit, so to speak. 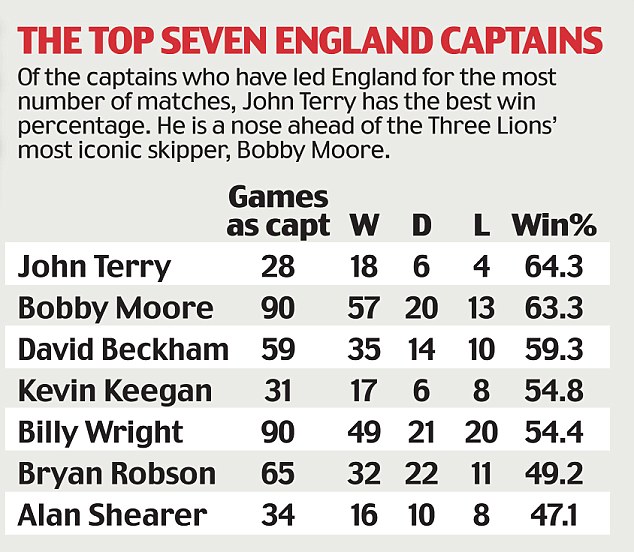 Having Terry return to the throne of captaincy can only do good for Chelsea both on and off the pitch. Surely, it'll impact the quality of his performances going forward, but you also have to consider the aspect of Chelsea as an exported product internationally. Having the captain of the English national team among our ranks will further our domestic and international marketing appeal, which is no doubt an important part of our future financial viability. Remember, we still have some work to do if we're planning to get 'in shape' before FFP kicks in. Therefore, every dollar counts, and every opportunity to expand the Chelsea brand will have to be considered and explored.

Does it fill my heart with joy that Don Fabiola has been outed for his poor handling of this entire situation? Certainly. I'll save the criticisms for when they truly matter, but it does warm my soul to watch him wriggle in agony as he realizes that he might just have managed to screw this up more than anyone would have imagined possible. Seriously, for the amount he gets paid, you would assume he has the wherewithal and subsequent intellect to make a decision on the captaincy without turning it into a fucking reality television show-type train wreck. But alas, he does not.

For EBJT, this is his redemption song. Anyone that's been paying attention since he lost the captaincy will tell you that he's played like a man on a mission. His shifts in the back, regardless of who Capello has paired him with, have been both inspired and strong. He's playing with absolute purpose and has done well to slowly rebuild his reputation in the eyes of the general public, who mind you, are fickle. In my estimation, he's gone about this in the most appropriate of fashions. He hasn't sulked, hasn't publicly blasted his teammates for their poor performances as captains, respectively. He's, for the most part, kept his opinions in check, barring two instances where stories leaked suggesting his dissatisfaction with the England set-up. Otherwise, he's been by most accounts a model citizen for almost a year running.

That last sentence is more than I can say for more than 75% of that squad. Shall we run the list? Peter Crouch, banging prostitutes during a bachelor party in Spain. Wayne Rooney, banging prostitutes in a bar whilst his teammates are upstairs gettin' their swerve on. Gerrard, throwing up the V whenever possible. Ashley's off shooting people in the ass, Frank's gone reckless behind the wheel a few times, about half the squad's been caught out and about with their red-eye on. But we're not supposed to notice this. No no no, we're supposed to just ignore all these mistakes and focus JT's indiscretions, or so the FA would have you believe.

Is JT, by proxy, the next Michael Vick? Think about it, both players were marred by controversy, but when given a second chance, Vick behaved, got his head on straight and began performing to the peak of his physical abilities. Could EBJT be next in line to continue the tradition of rebirth? It's not entirely out of the question. Discuss..