A match billed as Fernando Torres vs. Liverpool turned out to be pretty dull viewing, but tactically it was the most interesting game of the Premier League season so far, with a (rarely seen) 3-6-1 against a 4-4-2 diamond. In the reverse fixture at Anfield, Liverpool dominated the midfield thanks to poor positional play from Yuri Zhirkov and poor general play by Ramires, allowing both Steven Gerrard and Lucas Leiva far too much time in possession and ultimately giving the hosts a 2-0 win. Sunday's 1-0 loss was a different story. Liverpool edged the midfield battle, but by nowhere near as much as they did in November - their real focus was on defence. Once they scored they could drop back even further to defend with all hands. Formation chart after the jump...

Chelsea played a formation that has one purpose and one purpose only - to attack the centre. Liverpool countered this by ceding possession in Chelsea's half and fielding an extra central defender. In essence, the game became Liverpool's back three and their midfield diamond vs. Chelsea's front two and their midfield diamond - although both side's full/wingbacks got forward on occasion they were hardly influential, and Dirk Kuyt was more or less totally isolated up front*.

*Liverpool have a solution to this in Luis Suarez, but by the time they'd have thought about bringing him on, they were 1-0 up and didn't have to worry about scoring.

3-6-1 is a very strong defensive formation and it showed on Sunday. Chelsea were trying to force the ball through the centre and it was just never going to happen - each of their midfielders was picked up by a Liverpool counterpart as soon as they were in the attacking half (Lucas essentially man-marked Nicolas Anelka out of the game), and never had any time or space to pass to the forwards. Even when Fernando Torres or Didier Drogba did get the ball, which was rarely, they were always facing a spare man at the back. Starved of possession and space, the vaunted Chelsea front line failed to do much of anything at all.

There's been some criticism of both Frank Lampard and Michael Essien for failing to get forward, but both players like to surge through the middle and there was simply no space for them to run into. The two central zones (middle third and attacking third) were contested by thirteen players - are we somehow surprised that we failed to break through there? As long as Chelsea were focused on the centre attacks were highly unlikely to succeed. What the team needed was width - attacking the wide zones would have severely stretched the Liverpool back line and given Torres and Drogba the time and space to show their quality.

Ashley Cole and Jose Bosingwa provide some width in theory, but they were engaged in one-on-one battles with their Liverpool counterparts Glen Johnson and Martin Kelly - if they got too far forward they ran the real risk of being hit on the counterattack (Liverpool actually exploited Bosingwa several times at the end of the first half by catching him out of position). With neither shuttling midfielder comfortable in wide zones, Anelka picked up by Lucas, and the fullbacks fairly occupied, Chelsea couldn't generate any width at all.

The most obvious solution to this problem is for Chelsea to have fielded a 4-3-3. There'd have been problems with being outnumbered in the midfield, but with Liverpool relatively toothless up front it wouldn't have been a huge issue, and running a three man front band would have either spread Liverpool's centrebacks to breaking point or pegged back Johnson and Kelly, allowing Chelsea's fullbacks to move forward. Of course, they can't deploy both Torres and Drogba up front together in a 4-3-3, which was obviously the major reason they switched to the diamond. An alternative possibility would have been using Florent Malouda and Ramires as shuttling midfield players.

While Malouda is wasted in a midfield spot that requires him to defend, he could have been used to drift onto the left flank in the same way that Yuri Zhirkov was doing when he was fit and play for Chelsea. Ramires, on the other hand, is a perfect shuttler, and he's more than happy on the right flank. Using those two instead of the Lampard/Essien would have allowed an outlet on the flanks without losing the overall diamond shape, and allowed a potent attacking threat to give Liverpool something other than Drogba and Torres to think about.

Carlo Ancelotti opted for solution number one, but he did so very late in the game, withdrawing Torres for Salomon Kalou and pushing Anelka out to the left. It's hard to figure out what effect this actually had on the match, considering Liverpool scoring in fairly short order, with Raul Meireles breaking out of the midfield to convert a Steven Gerrard cross. I haven't yet done a thorough analysis of the goal, but I don't believe it had anything to do with team shape.

Chelsea then went into match-chasing mode which for Ancelotti  means the 4-2-4 - Malouda was at long last introduced (for John Obi Mikel, who was having one of his bad games) and he caused Liverpool more problems i his first five minutes than Torres did in the whole match. Chelsea applied some good pressure in the closing stages, generating what should probably have been two penalties, but ultimately the gambit failed.

It's interesting to note that while it 'felt' as though Liverpool edged the game, passing statistics tell a very different story - Liverpool attempted 441 passes with a 74% completion rate, while Chelsea managed 583 with 83% completion. This, of course could be a damning reflection on passing statistics more than anything else, but it is interesting. Watching the game, I felt that Liverpool did more in the midfield than Chelsea did, and many of those extra passes were simply the result of knocking the ball around rather aimlessly at the back, but the chalkboards tell me that Liverpool were even more guilty of that than Chelsea were. Anyway, here's the individual breakdown:

Figure 2: Individual passing for Chelsea and Liverpool, 2/6/11. Powered by Tableau.

The most striking thing is obviously Michael Essien's ridiculous pass count, but I think what's more important is how little Torres and Drogba tried to play the ball to someone else. This isn't a reflection of selfish play - rather, it's an indication of how difficult Chelsea found it to actually get them the ball. Here's a chalkboard map of where Liverpool made interceptions - I reckon about 2/3rds of their interceptions were on passes intended for either Drogba or Torres: 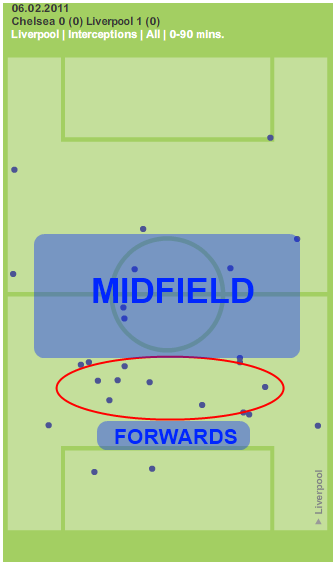 All in all, it was exactly the match we should have been expecting from the moment these two teams took the field. The centre was a congested miss, Nicolas Anelka was nowhere near as effective with Lucas all over him as he had been when he was totally unmarked (surprise!), and the only goal came on a quick break and followed an individual error. The script was written by Kenny Daglish and Carlo Ancelotti, and the teams followed it to the letter - full credit should go to Daglish for coming up with a clever solution to Chelsea's stars, and just as much should go to the Liverpool players for carrying it out.

This isn't to say that the diamond cannot work - it clearly can, as evidenced by Chelsea's 4-2 thumping of Sunderland in midweek. But this was a lesson in how to beat it. There's no need to worry about the 4-4-2 itself, but the utter inability to adapt a shape specifically designed to counteract it is a major, major concern. If Ancelotti thinks that other teams didn't see this display and don't plan on doing the exact same thing against Chelsea... well, I think we might be in for some more nasty surprises. It'd be interesting if the threat of a Drogba-Torres pairing causes a wave of three-man-back systems in the Premier League. Considering 3-5-2 and its variants have the advantage over more or less anything using a pair up front, it's a little surprising that it's so rarely used in English football. My feeling is that we'll be seeing it a lot more now.

It's important to note that very little of the loss is actually the fault of the players. When the game started, I noted that the only way we'd win is by some moment of individual brilliance - the tactical setup made Liverpool very hard to beat otherwise. I'm not about to blame Torres - or anyone else in the 'attacking' group of players - for not being able to exceed expectations. They were simply put in a very difficult position.