Share All sharing options for: Chelsea Tactics: The Torres effect

So we've got this new guy who brings a whole hell of a lot to the table. How do you accommodate him in a side full of class internationals? Better yet, how do to ensure you get the best out of him?

King Carlo has the answers. 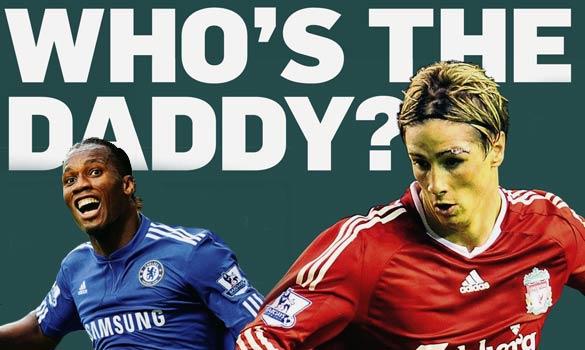 And what does he do?

That answer was essentially on display against Sunderland. It was, in a sesne, a successful trial run for what we may see going forward. It was a Diamond to some, a 4-3-1-2 to others. Either way, it dissected gentleman Steve Bruce's side, currently hovering around the top six, with relative ease. So what exactly did we see?

A return to the Milan days of old, it was. Ancelotti, for me, broke out the 4-3-2-1 and handed the most pivotal position in the formation - the one that was once entrusted to Kaka - to Nicolas Anelka. The aging Frenchman, maligned in recent weeks for some substandard displays, turned back his timepiece and oozed class. His techincal ability has never been in question, and when were talking about complete forwards he's name must be amongst the upper echelon.

Against Sunderland Anelka was employed in the hole - the tip of a diamond if you will. However, to make way for the attacking impetus of a Frank Lampard, Anelka was handed pretty much a free role behind our front two pairing of Salomon Kalou and Didier Drogba. Like Frank, the artist formely known as Le Sulk began in a forward position and receded off his line when needed.

It was, according to many, his finest performance in a Chelsea shirt. High praise to be sure.
Praise also must be given to our two forwards. Yes, both of them.

Kalou was singled out by most for what was an excellent shift in support of Drogba. His movement and understanding of his role were pivotal to our success. Yes, Kalou does understand the game - shocking, I know. Kalou is a striker turned winger, thus he thinks like a striker. His successful inclusion in the side against Sunderland was a successful dry run for what we'll likely see from Torres. His role may have even been more critical than Anelka's. When was the last time Drogba has someone alongisde him willing to take on defenders?

Anelka, a dynamo in the center of the park against Sunderland.

Drogba, meanwhile, was not on showcase whatsoever. He was, however, busy doing plenty of dirty work. Sunderland's centerbacks hardly ever left the Ivorian's side. While this failed to allow him time to create, he used this tactic to free up space for his teammates by dragging defenders all over the place. Drogba's work with his back to goal left Kalou time to play the channels and afforded Anelka plenty of space in the middle of the park. Not pretty, but certainly effective in the grand scheme.

Of course, all this is provided Tuesday wasn't simply a case of an opposing team being caught off guard by a change in tactics. And whether Anelka is in fact able to consistently shine as a Trequartista.
If not, a true No. 10 will likely need to be purchased in the summer if Ancelotti opts to continue with the formation. Lampard, while superb, is not fit for the role. We lose too much of his attributes - industry, stamina - with him in the hole. And I'm not entirely sold on Josh being able to fulfill the position. But I digress.

The rest of the team
The midfield three is also up for discussion. Most are ready for John Obi Mikel to take a hike. They're not sold. I am. While he's been less than stellar since returning from injury, I still think his role in this side is crucial. Yes, he's known to dwell on the ball for too long. But Mikel not only is a pivotal link between our central defenders and the attack, but he also is great in helping the team regain its shape. There are numerous examples of Mikel picking up possession after a failed burst forward from a fullback and retaining possession long enough for the team to reset itself. Overlooked, but nevertheless important.

For me, the only midfield position up for grabs is on the right between Essien and Ramires. Essien has shown some of that vintage drive in recent weeks, but his distribution has been woeful. Ramires, meanwhile, has improved exponentially in the last month - to the point where he's been among our best players on several occasions. I assume Essien will get the call against Liverpool, but Ramires is rapidly closing in on swiping that spot.

The back four is unchanged for now. Obviously David Luiz will soon be drafted in, with Bane moving back to right fullback, but Sunday is far too soon for Luiz to feature. Bosingwa has improved in recent weeks - though he's still far from the player we knew a couple of years ago - and the rest of that foursome (Bane, Terry, Cole) are world class defenders. Cech, nothing need be said about our No. 1. Fucking fantastic he is.

Conclusion
The signing of Torres is not just about a change in formation. More so, it's about options.

So a 4-3-1-2 seems likely going forward. I like it. But there's also still room for our standard 4-3-3, with a rotation of Drogba, Torres and Anelka at striker. That can only be good for us with prolonged runs in the Champions League and FA Cup expected. Plus, who's to say we need a concrete formation. We're one of the most fluid sides in the division. There is freedom aplenty for our players to roam and create, meaning that there's no real need to put a stamp on what we're doing.

The idea of playing three strikers together shakes some. But it's been done before and done well. Jose's Internazionale utilized three last season en route to a Champions League title (Eto'o, Milito, Pandev). Carlo's done it before with his incredibly successful Milan sides (Sheva, Inzaghi/Crespo, Kaka), with the versatile Brazilian serving as a trequartista or secunda punta. Again, it's about options.

It's really an intriguing prospect moving forward, whatever the decision by Carlo may be.