Yikes. Nedum Onuoha is in possession on Chelsea's left, with Nicolas Anelka, Didier Drogba, John Obi Mikel, and Ashley Cole all in fairly close attendance. Eventually he is tackled by a combination of Mikel and Anelka, but the ball pops free for Steed Malbranque to pick up and run back towards the safety of the Sunderland half. Drogba chases to no avail, and Michael Essien attempts to block him off as well, but Malbranque is able to make a sweeping pass out to Phil Bardsley on the opposite flank. Chelsea only had one player on the left side of the pitch, Jose Bosingwa, but he's marking Stephane Sessegnon and thus unable to deny Sunderland's left back any space.

So Bardsley races forward while Mikel desperately tries to cut him off and Sessegnon drags Bosingwa into the corner. Eventually, Mikel arrives in the area to make a challenge, but for some reason fails to do so, allowing Bardsley to simply cut the ball onto his right foot and shoot. Branislav Ivanovic ducks out of the way, and Petr Cech, possibly expecting a deflection, is wrong-footed and can only fall down pitifully as he's beaten at the far post.

Verdict: The individual flaws in the play of Mikel, Ivanovic, and Cech are pretty obvious here, but what made the Sunderland attack so dangerous was Essien's pursuit of Malbranque. Chelsea already has too many men on their left, and Essien was one of the few who would reasonably have been able to cover an attack coming from the right - instead he opted to chase Malbranque back into his own half, failed to make the tackle, and was left woefully out of position. Mikel was forced into a long, hard chase to tackle Bardsley - he ultimately failed, but it shouldn't have been his responsibility in the first place. Essien got back just in time to watch Bardsley's shot go in.

Simple combination play gets Chelsea their equaliser via the penalty spot. Mikel is on the ball just inside the Sunderland half. His forward pass to Salomon Kalou is instantly knocked back to Michael Essien, who pings in a chipped long ball to Ashley Cole making a very deep run into the Sunderland penalty box. Ahmed Elmohamady is tracking him (Onuoha was trying to pick up Kalou), and makes a total mess of the aerial challenge, virtually piledriving the diminutive Cole into the ground. It's a clear penalty, but a bizarre one to give up from Sunderland's perspective, as there wasn't much on for Cole even if he did manage to control it. Anyway, Lampard steps up and fires past Craig Gordon, who dives in the wrong direction.

Verdict: Massive individual error by Elmohamady leads to the equaliser here. Chelsea's play wasn't bad, but it certainly wasn't worth a goal, and the idea of flinging in long balls for Ashley Cole to chase actually physically pains me. However, he was up against a winger rather than a defender (turns out he's seen significant time at right back!) and it showed with the horrible attempt at a challenge, and Lampard made the most of Sunderland's mistake.

Classic counterattacking football from Chelsea. Asamoah Gyan is tied up in a corner with John Terry and Jose Bosingwa all over him. He extracts himself from the mess temporarily and tries to send in a centering pass, which goes straight to Frank Lampard. Lampard's looped pass to Drogba isn't brilliant, and Phil Bardsley manages to cut it out, but Chelsea get lucky with the ball falling to Anelka's feet and allowing him to break up the pitch, with Kalou ahead of him. Anelka's pass is brilliant, finding Titus Bramble totally out of position, and Kalou's first-time finish is made much easier by Craig Gordon rushing out of the net for no apparent reason. The ball trickles ever so slowly into the goal, with Anton Ferdinand in hot pursuit. 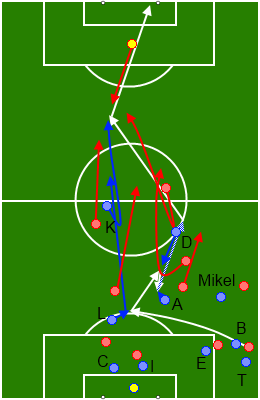 Verdict: A bit of luck for Chelsea here with the Bardsley tackle but as soon as Anelka had the ball, the play was brilliant. Kalou's finish was excellent given the circumstances, but this is probably a goal or a good chance even if Gordon stays in his net, so it's hard to pin all the blame on him from the Sunderland perspective. Also, excellent defending by Terry and Bosingwa to force Gyan into an elementary error.

Ahmed Elmohamady is breaking down Sunderland's right as a Chelsea attack breaks down. Drogba is available to challenge, but his attempted slide tackle sees the ball bounce off Sunderland's right winger and fall in the perfect position for Elmohamady to continue his run. He makes it towards the edge of the area before running into John Terry, Branislav Ivanovic, and then emphatically John Obi Mikel and Mark Halsey gives a free kick after Mikel simply lets the Egyptian run into him. It was a slightly strange decision, considering Elmohamady had just given possession to Michael Essien with a bad pass.

Chelsea were made to pay for it as Keiran Richardson stepped up and fired the free kick in at Cech's left-hand post, the shot going straight under the wall (which jumped, expecting a curling strike) and the Chelsea goalkeeper failing to move a muscle.

Verdict: Bad luck, questionable officiating, and a very good free kick. I'm not going to blame the wall for jumping - we don't see free kicks like that all the time, but it is obvious that Richardson knew exactly what he should be doing in that situation. However, if Chelsea were expecting a kick curled in towards the near post with Richardson's left foot, Cech shouldn't have been caught so unprepared in goal. If they weren't, the wall shouldn't have been jumping. All in all, I'm going to put a good share of the burden on Petr Cech here. He was unsighted, but he should have realised what was happening and reacted much faster.

Another set piece goal, this time from a Chelsea corner. Terry won the corner after being fed by Anelka and taking a right-footed shot across Craig Gordon's goal that looked as though it had sailed wide without any assistance from Sunderland, but the captain claimed for a corner and was given one. Drogba took from the left, delivering an inswinger for Terry and Richardson to squabble over. Richardson managed to clear, but Frank Lampard was lurking on the edge of the box and absolutely hammered a shot that Gordon was very fortunate to keep out. The rebound went straight to Terry, who volleyed a bouncer into the top left corner.

Verdict: Good corner, fantastic hit by Lampard, and good reactions by Terry. Lampard's shot deserved a goal, and midfielder Jordan Henderson should have done more to prevent Terry getting on the end of the rebound. After Sunderland had cleared the corner, Terry drifted wide without really being picked up, and that cost the home side after a fine stop from Gordon.

In the dying minutes of the game, it's essentially a five on seven attack as Chelsea look to kill the match off. Lampard starts in possession, threading a relatively easy pass through a trio of Sunderland players whose purpose in standing around where they were I can't quite figure out, and Drogba flicked the ball on to substitute Florent Malouda, who was stationed more centrally. Malouda got a lucky bounce when he was tackled by Anton Ferdinand, then easily evaded Onuoha's rather lackadaisical challenge and ran to the byline. Craig Gordon came out to the near post, as did Titus Bramble, leaving Anelka one on one with Phil Bardsley in the centre. Once the runs had developed, Malouda threaded a pass in, which Anelka converted with the outside of his foot.

Verdict: Incredibly poor tackling from Sunderland, who had two opportunities to get the ball away and wasted both of them. Bramble's discipline was also poor, but I don't know if I can blame him - if he hadn't charged away from Anelka to challenge Malouda the latter could have just walked up to the goal and slammed past Gordon. Malouda's timing was excellent, and so was the run and finish from Anelka, who definitely deserved his goal after the magnificent effort he put into his game.