There's this game at Stamford Bridge tomorrow night. It's kind of a big deal. 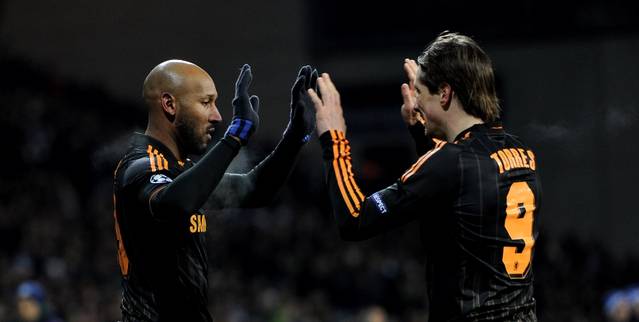 The litmus test has arrived. Gross inconsistency has plagued Chelsea for more than two months. Moments of distress and outright anger (Arsenal, Liverpool) coupled with glimmers of hope (Sunderland) have transformed many of us into Edgar Wright's zombies, so nearly numb to it all. A somewhat impressive win last midweek in Denmark has sent ripples of optimism through the CFC fanbase, again, in anticipation of Tuesday night's league fixture at home against Manchester United.

The league leaders are currently 15 points clear of us at the top of the Premier League table. To clarify, you did read that correctly. Where did it all go wrong? This match, while not imperative in terms of this season's ultimate goal (qualifying for the Champions League), represents so much more than just another fixture. It's a chance to prove ourselves. Will Carlo & Co. be up to the examination at hand?

Why: Because it's time we show England - the world - that we are not about to drift away from the footballing elite. Far from it in fact.

A win would see us leapfrog Tottenham into fourth place on 48 points, just two adrift of Manchester City who will have played a game more. We have had some favors done for us, and must capitalize.

Official interest
Martin Atkinson is scheduled to be in the middle, interesting for both involved parties. United supporters have been quick to highlight this appointment, what with Atkinson officiating the first meeting between these two sides last season. They reckon the free kick he awarded, which led to the only goal (a John Terry header) was bogus. Whatever.

The real intriguing aspect of Atkinson's appointment is our record with him in charge. Sixteen played: 15 wins, 1 draw and no losses. Thirty-two goals for, two against. I may have just jinxed us, but that is a  pretty damn amazing statistic. Then again, I got this from a United fan so who knows how accurate is it.

Lining up
Manchester United
What do we know? Well, I'm pretty damn sure Ferguson will not opt for a four-man midfield. Rarely does he in the bigger matches. There's also a lack of personnel. Giggs has been missing for a couple of weeks and thus is not quite match fit. Anderson is out for a prolonged period, leaving midfield options at a premium. The 36-year-old Scholes has played twice in less than week.

That leaves us with a 4-3-3 blessed with ability to counter.  Berbatov, rested on the weekend against Wigan, flanked by Rooney and Nani. In the middle of the park, a tight three-man unit of Scholes, Carrick and Fletcher. Ferdinand is still out so obviously the impressive Smalling continues to partner Vidic.

Dare I say it, but we can get at that side. We can.

CFC
How do we do it?

Everyone has been having their say in the 'What would you do?' thread, with many great options mentioned. A 4-1-3-2 was dabbled about (Max, dr), which caught my interest. But, like I have said, our traditional 4-3-3 is, in my opinion, our best bet against a side with this kind of experience and talent.

The flat 4-4-2 is far too risky at this stage to be employed Tuesday. Lampard and Essien were effective in the formation against Copenhagen, but lacked the understanding necessary to prevent holes forming between midfield and defense. The amount of space that was available against Copenhagen was alarming, and would certainly be exploited by someone like Rooney. The 4-3-3 gives us stability and a holding midfield to not only plug the channels but also provide the link between midfield and defense.

Drogba has been less than stellar of late. In fact, he's been a sulk. Add that to the face that he's rarely fired against Manchester United and his exclusion is pretty straightforward. The rest of the first team picks itself.

What this outfit gives us is flexibility. Malouda can easily tuck in behind the front two if needed. He also can drop into the midfield, allowing us to proceed with a 4-4-2 if Carlo deems it a requirement. A best-case scenario sees Ramires mark out Nani, Essien remain disciplined and Lampard find the freedom necessary to pick a pass and provide signature runs in and around the box. Torres is able to play off the shoulder of Vidic, Anelka's movement drags Smalling and Evra out of the picture and Malouda revisits his early-season form and attack's the vulnerable O'Shea.

Sounds fantastic. Me, I'm just hoping for solid play built on some determination and fight - like the old days. KTBFFH