The News of the World would have you believe such a headline. 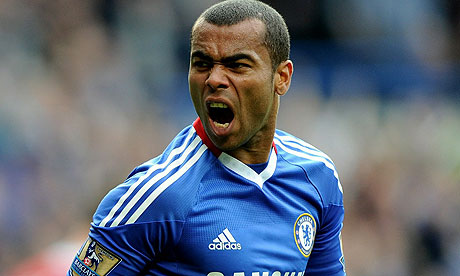 The English media is at it again, trying to rile up a good ol' storm ahead of our date with Manchester United at Stamford Bridge on Tuesday evening. This evening, the News of the World have gone all exclusive with the story that Ashley Cole accidentally discharged a .22 air rifle at Cobham, shooting a work placement student in process.

This is by no means small business - check that, no small bidness. Quite the opposite, in fact.

However, after reading some of the headlines and assorted other shit being thrown about, you'd think Cole had actually shot the young man with an elephant gun in some sort of twisted spin-off from the 'The Most Dangerous Game.'

Ashley Cole shot a member of Chelsea backroom staff, full story in tomorrow's News of the World.
-Neil Ashton, via Twitter one hour ago

The actually newspaper headline is even better:

The Mirror had some fun, too.

Gunned down? Does that not suggest death? The report says the kid was stitched up by our medical staff and sent home only to be forced to return two days later after the wound opened. Not to kid around, but that sounds like our medical team right there. Anyway.

While I enjoy my share of sensationalism, as you may well have noticed around these parts (see this post's headline), this, in my opinion, is taking it much too far. How could you seriously sit down and write a headline that suggests Ashley has shot a man with a real gun? Senseless - just like Ashley's actions. There are more questions, too. With only one source, how certain are we they've got this correct? NOTW has been known to fuck up from time to time; Cole himself won damages from the newspapers' publishers in June 2006. I'm also hearing rumors that the one victim is now two, so what the hell are we actually supposed to believe? Furthermore, this happened last weekend. Why are we just now getting the story? A curious decision to be sure.

Now, like I said, this is no small matter and the incident needs to addressed in-depth by the suits. I fully expect Ashley to incur a serious fine in addition to a serious tongue-lashing from Romes, EBJT and the like. Maybe even a suspension, though I doubt it.

Stupidity, it seems it's all our left fullback is good at. Well, that and football of course. Sort yourself out, mate.

Hey, at least he hit the target, right? Too soon, too soon.