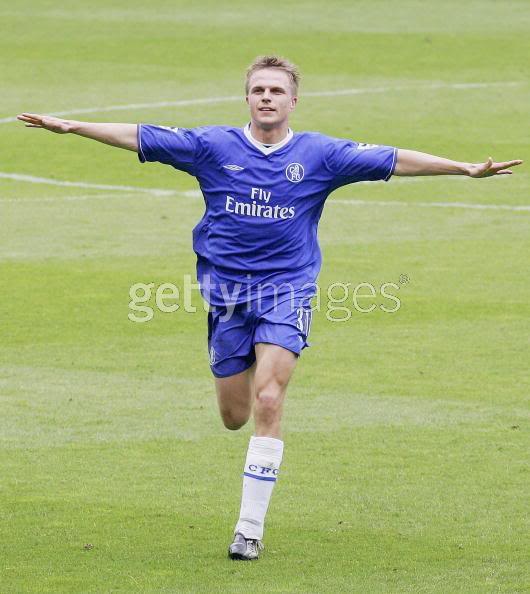 Yeah, maybe we only needed a draw way back on the final day of the 2002-03 season to ensure our future would forever change. Everyone, a big hand for Marcel Desailly. Still, the man above set it up with a peach of a cross, then added an all-important insurance goal to spark a Blue revolution.

So, make sure to give Jesper a proper reception reception, both tomorrow and at the Bridge. He deserves it. Now, on with the preview.

Why: Well, as unbelievable as it may seem, this competition has become our only hope for some hardware this season. Yes, we released our grip on the FA Cup over the weekend, in style mind you. Nothing like bollixing up another penalty shootout to give you confidence heading into a crunch Champions League tie. Honestly, the way we're playing, I'm not even sure we can get a result here.

Oh how far we've plummeted in only a few short months.

I'm not sure what else to say with regard to Chelsea. It's been a shit sandwich for months now, and, frankly, I'm sick of discussing it because it makes me even sicker than I actually am right now. Fuck respiratory infections.

Anyway. Let's check on what King Carlo has had to say in the lead-up to tomorrow's opening leg.

"Chelsea will not go out against Copenhagen."

Oh dear. Didn't you say something similar prior to the Wolves match?

As for the team, screw it. We can rule out Josh getting a game so play who you want, Carlo. Just get them to mesh. Get them to play hard. But, most importantly, instill some confidence, some swag. We so desperately need our mojo back.

Some statistics - Our away record in CL knockout stages since entering competition in 2003-04: 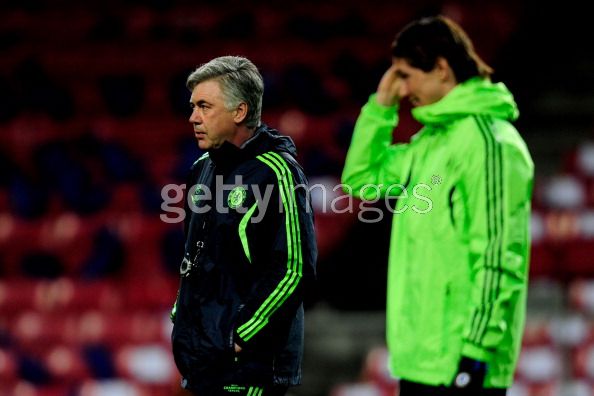 What do we know about our Danish opposition?

Well, they feature a Chelsea legend in Jesper Grønkjær. The Lions are the most successful club in Scandinavia over the past decade, and are currently 19 points clear of the competition at the halfway point of this season's Superliga. København are also unbeaten in five European home games – winning four. Very impressive.

What perhaps is of more significance, at least for Chelsea, is the fact that Copenhagen haven't played a competitive match since 7 December, a CL group stage win, 3-1, over Panathinaikos that ensured advancement into the knockout round. We can hope that rust will be evident - though I believe their undefeated in friendlies over their break and have been scoring for fun.

Their new Brazilian with a bizarre name - Claudemir - has already established himself as the finest player in the Danish league. He scored the leveler against FC Barcelona on Matchday 4 of the group stage. He's not alone, either. Senegalese striker Dame M'Doye and Cesar Santin, also Brazilian, should not be overlooked.

The coach, Ståle Solbakken, says his players are confident.

"Some of my players are so sure they think they're a better side than Chelsea now," he said. "Maybe I should be talking them down a bit. Some have only lost one or two games playing in this side, so they think it's easy. Confidence is very high in the team."

Why shouldn't it be? We've been rubbish. If there was a time for them to meet us, it's now.

We're going to need something seriously uplifting to get us through this, I believe. No question the weekend's defeat will prove far more damaging than any prior. Another uninspired performance could spell the end for Carlo, though I'm convinced he's hear until the end of the season - for good or for bad. Time to come good.

Bonus: Moving pictures from the fateful day in 2003.