It's been far too long since I took a real shot at useful statistical analysis, so I dedicated my afternoon and evening to looking at Chelsea's passing in 2010/11. This isn't a superficial analysis - I basically dug as deeply as I could without going into player by player comparisons. What I wanted to do was see whether passing mattered in terms of goals scored, goals conceded, and differential (i.e points), and if it mattered more from certain positions. Turns out yes, it matters, but the amount it matters varies wildly by position. If graphs are your thing, dive in. I think you'll find this post... illustrative.

Yeah, I went there.

Anyway, methodology. I went through all of Chelsea's chalkboards from the Guardian this season and looked at passing for Chelsea only, then split the passing values (i.e. passes attempted, completed, and assists) up by position. My familiarity with the position each player filled in every match this year allowed me to do this reasonably quickly with minimal cross-referencing, but it also made working on other teams and other seasons impractical. Players were split into goalkeepers, defenders, midfielders, and forwards, and then I divided the number of passes attempted and completed by the number of players who fit into whatever category. This of course helps us when we switch from 4-3-3 to a 4-4-2 diamond and back, as in recent weeks.

Just a quick note before I go on... while I'd have liked to have made this an exhaustive study of all Premier League teams back to 2006, I simply didn't have the time to gather the data manually while figuring out each team's formation at all times. As a result, this study suffers from a relatively small sample size - we have data from Chelsea's current season and that's it. All conclusions should therefore be taken with a grain of salt.

Let's take a look at what we find:

Not much of note there, right? I can see some patterns in there, but I think that's only because I've already gone through with the data analysis. I also can't spot any clear trend in passes attempted or passes completed per player, so we'll have to do some tinkering to make this all work out. Let's try looking at some different graphs:

Note that goalkeeper pass completion rate seems to have a negative relationship with goals scored, while midfield completion rate has a positive relationship. We see a similar, but reversed trend in goals conceded, with higher goalkeeper completion percentage correlating to more goals conceded by the team and more midfield passing going hand in hand with less. Obviously, one of these factoids is easy to explain, and one is not. We'd expect the goal differential to have a little more of a pronounced effect, and, yep, it does:

Ok, all of that is nice. We can see that there's a relationship in here somewhere, and it's pretty clear that the most interesting area is the midfield. Let's turn to a mathematical rather than visual approach to extract the rest of the information now. We can do this by finding the correlation coefficient, which basically measures how related two variables are. 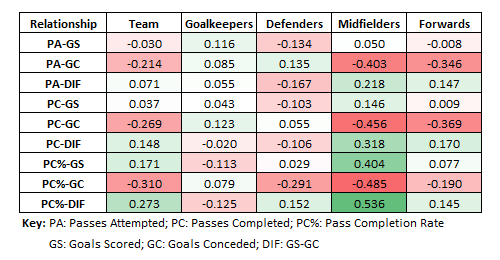 Figure 5: Correlation coefficients between goals and passing values for Chelsea 2010/11.

The correlations are colour coded, red for negative and green for positive, and the shade is dependent on the strength of the relationship (lighter is weaker). Hopefully the chart above is clear enough.

Some points of interest:

Bear in mind, of course, my earlier caveats about sample size, but this is intriguing data, at least to me. It strongly implies that we should be ignoring Petr Cech's distribution but paying significantly more attention to how well our midfield is passing, and also helps defend John Obi Mikel and the like from accusations of uselessness. I think it illustrates just where the most important zones for ball control are, too. There's a good reason that the centre of the pitch is the area in which the most decisive passing happens - it's because it's the single most vital area of the football field.

So, there you go. For Chelsea, at least, midfielder passing matters a lot on both sides of the ball, goalkeeper passing matters not at all, strong defensive passing stops you from conceding, and forward passing doesn't really matter as long as the ball is far, far away from your goal. I think that's enough on passing for the day, but I strongly suspect that the data presented above is repeatable across multiple seasons and teams, and that central midfield passing is always always always of critical import to a team's success. Good to know, eh?