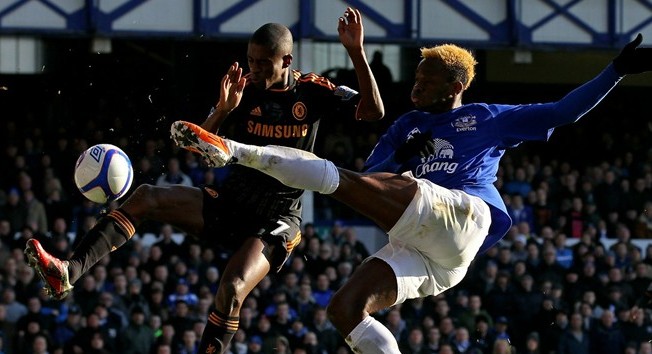 Why: Because, as I've said in recent weeks, this competition may well represent our best (our only?) chance at some hardware this season.

Devin has already given us some great insight into tomorrow's replay at Stamford Bridge. His five-point presentation is a superb preview in itself, even if Bob is not eligible to play tomorrow - along with El Nino. That being said, I won't spend too much time waxing poetic about this one.

It's a must-win, for more than just the reason stated above. We desperately need something positive to build upon after one wretched (Liverpool) and one mediocre (Fulham) league outing. We haven't scored in 180 minutes. That's shocking, particularly for a team that once was netting for fun. Another fruitless 90 will see us add another historic piece of futility to the season - the last time we went three games without a goal was March 1999. Furthermore, we need to create some momentum entering Tuesday's Champions League tie with Copenhagen. God forbid we fail to show up in Denmark.

There is, however, reason to be upbeat heading into Saturday's tie. We haven't lost at home to Everton in any competition since 1994. More? The Toffees haven't won away against a Premier League side in the FA Cup for even longer - 1990. They haven't kept a clean sheet in 18 games. There's no Luis Saha, out injured. Plus, there isn't a better setting for The Mighty One to rekindle the flame. He's scored eight in 12 against Phil Neville & Co. See, positives.

Negatives? No Bob. And no Bosingwa. That means the trusty - but woefully off-pace - Paulo Ferreira will likely be in the mix. Hello, Leighton Baines! Pray our aging Portugese gets some help from somebody because he's going to need it. Regularly.

I expect the traditional from Carlo (4-3-3), with few surprises - as usual. Of course, this is bogus considering the age of the squad and the amount of games these seniors have already collected this season. I'm sold that fatigue is at least a good portion of the problem at the moment. Myself, I'd give Josh and maybe Bertrand a run from the start. Maybe Borini, too. Hell, Chalobah should get a look. But you and I both know that's simply a no-no.