So, the Inter-webs is rife with conversation about what went down in Copenhagen last night. England won, sure, though it wasn't a particularly impressive performance. Rather, the talk at the moment seems to center on what went on during the second half of the match, in particular, the curious game of passing along the Captain's armband to anyone not named John Terry. 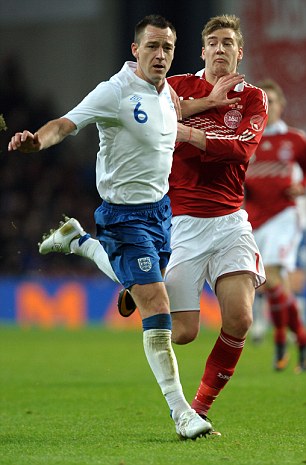 The Daily Mail's Matt Barlow has done an extensive article detailing the finer points of what really transpired on the pitch, including why this particular punishment may not bode well in the long run for both England or Terry's respective futures. I'm obviously biased in my admiration for JT as a footballer, but before I go any further I want to make it clear that I in no way condone his behavior off the pitch, or the alleged reports of his infidelities with Wayne Bridge's former fiancee.

Now look, Fabio made the right decision last year. It was obvious that the situation was destined to flare-up into something far more sinister if he stood pat, and JT needed to be replaced before the World Cup. If nothing else, Fabio had to do something to assert his command over the squad, and axing John was the easiest tonic to swallow for all parties involved. The press got their villain, Fabio looked like a man in charge, and John had to withstand the vitriol. Problem, apparently, solved.

Or so it seems that may not be entirely true. With Rio Ferdinand bordering on the verge of becoming a perma-crock and ickle Stevie Gevie rendered out for the fixture, Fabio handed the captaincy to Frankie Lamps on Wednesday, who did a fine job of leading the side. But in the second half, after Lamps had gone off and handed the armband to Ashley Cole, things got a bit ugly. Essentially, Cole was subbed for Baines, who in turn took the armband and, confusingly, stumbled around trying to find a senior-enough member of the squad to take the reigns. All the while, he and everyone else on the England touch-line looked through John as if he wasn't present. Sheepishly, Gareth Barry took the captaincy, but the subtext was quite clear: John is no longer in contention for the captaincy, period.

But does this strategy of 'freezing-out' JT make long term sense? Barlow's article dives into detail about last year's England fixture with Egypt, almost a month after Terry lost the captaincy, including some poignant quotes from the man himself about conversations with Don Fabio about how to move forward. Most notably, JT remarked:

"The armband got passed around between five or six players. I just felt, 'OK, I've been stripped of the captaincy but don't take the p*** out of me.' Fabio had told me at the meeting I was still a big voice in the dressing room and wanted that to continue but on the night it felt the opposite."

I can understand punishing a player that's serving as a distraction to the team, or dropping them for underperforming. But, to his credit, John has been putting in solid shifts in an England shirt since losing the captaincy. On Wednesday he played a full 90 minutes and was as composed as ever. I don't anticipate Fabio doing a complete 180 and handing the reigns back to JT on a permanent basis, but, I don't think it's out of the question to consider using John as a 'stand-in' captain rather than to add insult to injury.

Face it, the guy has been leading the Blue Revolution for years now, is a natural leader on the pitch, is very vocal, and most importantly, he has the respect of his peers. Infidelities notwithstanding, if you're evaluating a player on merit alone, John has to be considered for a part-time position as a captain for England. Whether or not Fabio realizes this truism remains to be seen. I think all of us Blues fans would relish seeing John get the armband back, but even if he didn't, I don't think we'd mind as long as he continues to lead the charge for us everytime the famous CFC take the pitch!