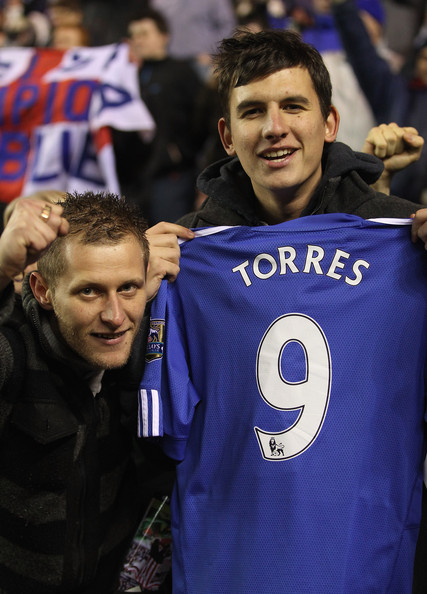 In our last Premier League encounter, I wrote that the demons had finally been lifted and it looked as though the famous CFC were beginning to find their sea legs once more. It might have been pre-emptive, and it could easily have been considered a classic case of drinking the proverbial kool-aid. But our performance against Bolton was authoritative, if not somewhat haphazard. Over the weekend, we struggled to link together passes and played a thoroughly disjointed match on Merseyside, and I thought quietly that we might have regressed in the space of five days to our old, detestable habits. Today, as the match kicked into high-gear, and both teams flew coast-to-coast assaulting the nets with chances, we finally saw signs of a Chelsea squad breathing fire and venom once again.

Clearly bolstered by the recent additions of one Nando-San and David Luiz, the boys put together a commanding attacking performance, led by Nico Anelka in a Xavi-esque role that featured mazy runs, slinky passes, and the deftest of touches. This match was wide-open and somewhat of a free-for-all in the center of the park, but it made for some sensational forward play and plenty to be pleased with. On to the recap:

Four minutes in, and we were pegged one back courtesy of some dismal marking by Obi and a Phil Bardsley shot from just outside the box. Petr didn't even react to the shot before it settled in the bottom-right corner. My immediate thought was 'Christ, here we go'. But the reaction from the lads was swift, with Frank Lampard grazing Craig Gordon's post with a low-drive, which was followed minutes later by a beautiful over-head pass from Michael Essien to Ashley Cole in the box, who went to ground and was rewarded for his 'theatrics' with a penalty. Lamps laced it up and squared things at that point. 1-1 and I'm not panicking any longer.

In the 23rd minute, some quality passing found our midfield maestro for the night, one Nico Anelka, who slipped the ball into the forward path of Sala Kalou, who had to utilize his intuition to beat the on-rushing Gordon and give Chelsea the 2-1 advantage, which we held for a mere four minutes. Kieran Richardson, him of the scrunty variety, smashed a delicious free-kick into the back of the next before we could breathe to equalize for the Black Cats. 2-2 and I'm searching for an inhaler in the office. 27 minutes into the match, four goals to share, and it's beginning to look like one of those 4-4 draws that we all dread. Before the halftime intermission, Chelsea manage a few more shots on target, including a venomous strike from Michael Essien, but Gordon does well in his stead to save everything and keep things level at the break.

Halftime, I'm pacing the office like a madman. I'm thinking, we've got to get Obi off and put car Ram-Rod on his place, so we can liven the pace and play more on the counter attack. I'm calm, though, considering we're controlling possession and thus far have had the lion's share of chances. Just need to breathe. Just need to breathe.

The second half kicks off and it's all bells and whistles. The fans can hardly keep up and the announcers, bless them, are chortling with the kind of excitement reserved for a Gareth Bale step-over. It's end-to-end once again, and there's no chance this will let up. Chelsea keep their foot on the gas, with Lampard blasting two virtually identical shots at Gordon to no avail. A corner results in a goal-line scrum that somehow stays out, until Lampard fires one that Gordon can only parry in the direction of England's Brave, who calmly steps up, smashes into the ground, and watches the ball bounce above and beyond Gordon for the lead. 3-2 and now I'm doing fucking summersaults.

At this point in the second half, the possession looks something like 75-25 in our favor. Delicious. We're unrelenting in search of more goals. A few minutes later, Nico unlocks the Sundy defense with an amazing run and drops one off for Kalou who, somehow, manages to rattle BOTH POSTS without so much as getting the almighty goal. Talk about a tease. But we push on, continuing to harass and attack. There's Ashley Cole getting into the body of Gyan on every run, there's Bosingwa muscling for loose balls, there's Ivanovic and JT winning everything in the skies. There's that man Essien, invisible for long stretches of late, putting his foot on every challenge and driving the squad forward. There's just so much Blue everywhere, it's hard to remember when it's looked this good of late.

There's a flare up. Keiran Richardson is involved, of course. Ivanovic don't play no shit though. Straight to the grill, classic stare-down status. Me likey. There's Bosingwa taking his sweet-ass time walking off the pitch, mean-mugging and inviting the vitrol from the home support, the plaudits from the traveling fans. A cameo for Malouda and Paulo results in a lovely set-up by Flo for Nico to finish the night with a goal, and that's all she wrote for what many would consider our best performance in some months. 4-2 it ends, but you have to figure if Nando was watching, he's pissed himself at least seven times with excitement looking at the service he'll be getting in a blue stripe.

Cech - 6 - Not a great game, clearly at fault for the first, little he could do about the second. Did better as the game progressed.

Bosingwa - 6.5 - Visibly improving, was a constant presence in everything today. Will be interesting to see what his role becomes now with Luiz and Alex back in the mix soon.

Ivanovic - 7 - Better from Bane. Defensively composed which is what we need from him on days like this.

Terry - 7.5 - Led an aerial assault, marshaled the back line, pushed forward, and got a goal to boot.

Cole - 7 - Quietly had one of his standard, imposing performances full of running and life.

Mikel - 4.5 - Atrocious. Did little to suggest keeping a place in the XI with Ramires offering much more in his stead.

Essien - 6.5 - Improvement on his last two matches, will need to continue to perform though before we can safely say he's out of the woods.

Lampard - 6.5 - Tons of shots on target today, and I'd suspect if we were a tad healthier he might have notched a hat-trick. Still, nice to see him impact the game today.

Anelka - 9 MOTM - Stunning display. Was everywhere on the night. Unlocked the defense with a series of runs, passes, step-overs, and cut backs, dropping deep into defense on a number of occasions. Did it all and did it with vigor. Loved his game today, I'd reckon his best in a Chelsea kit.

Drogba - 6 - I expected him to show a bit more poise and control, but all-to-often he was the one throwing out his arms in disgust at a non-call or a tough challenge. Doesn't bode well for his future with Nando.

Kalou - 8 - What an effort today. He, like Nico, was attempting to do it all, and I have to say this was one of his nights when he was clicked-on. Minus that double-post heartbreak, he supplied the squad with a forward edge we so desperately have needed in weeks past. Good on you, son.

Ramires - 6 - Didn't get a tremendous space of time, but did manage to make his presence felt, which is more than can be said for Obi on the night.