Right, we've had a bit of fun then haven't we? Fernando Torres and David Luiz are officially blue soldiers, which I think I speak for all of us when I say we're delighted to welcome them into the fold. It seems Romes and company put their money in motion and made some generally grand gestures to signify our intent going forward for this year and beyond. The future burns bright once more at The Bridge! But before we get ahead of ourselves, we have the small matter of a match tomorrow that requires our undivided attention. 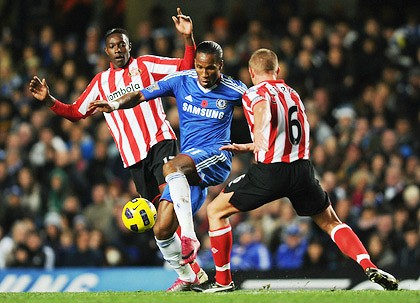 Why: Because it's the first day of the rest of our lives, friends. A new beginning, whatever colloquialism you prefer to employ, this one is huge on many fronts. It's our first match PT (post-Torres) and even if the Spaniard doesn't suit up (I suspect he won't) the lads will undoubtedly be buoyed by the addition of both players. We didn't play particularly well against Everton, and we'll need to clean up the mistakes before the weekend fixture against Liverpool. There's plenty of room for improvement amongst the squad after the weekend on Merseyside, and I'm looking at Frank Lampard and Michael Essien in particular. Frank was something of a spectator for the majority of the match and Michael has been a bit out of sorts for a few weeks now. Both need to come around and deliver solid performances heading into the weekend against Pool.

Again, a draw is not acceptable currency given the state of affairs today. Roman has given Carlo the tools he requires to make a go of the League, and it'll therefore now fall on the players to produce the kind of results he so expected after offloading some 70mm quid for Nando and Luiz. Plus, there's got to be revenge on the minds of everyone in a Blue kit tomorrow. If you recall (and I won't blame you if you've managed to block it out of your minds since it happened) Sundy came into the Bridge and hung a 3-0 on us in the most embarrassing of fashions. Back then, there was no heart, no determination, and no grit on display. Tomorrow's a chance to put it all in perspective and get back to winning ways.

As I said before, I don't anticipate the new kids to feature quite yet, and Carlo will probably opt with the lineup he played against Everton in this match, but the weekend is a whole different ballgame and we'll see just what he elects to do at that point. So yes, for now you can expect the Malouda-Drogba-Anelka axis to go unchanged. Sturridge off to Bolton means we no longer have to pine for a start on his behalf, and it seems we successfully managed to loan everyone except for Joshy to a club for valuable experience this second half. Splendid.

Sunderland, meanwhile had themselves a nice transfer window, acquiring Stephane Sessegnon and Sulley Muntari, in the wake of losing Darren Bent. Sessegnon is likely to get his first start for the Black Cats but Muntari is not ready to feature as he still requires a visa before he can take the pitch. I'd venture Sunderland to throw out a lineup as such:

Now, lets go out there and get a damn result, shall we? KTBFFH!