We faced elimination from the Champions League at the group stage via a combination of individual and collective errors partially attributable to the implementation of a new philosophy, but it was the old method that took us through. John Terry and Didier Drogba shone as Villas-Boas adapted his tactics for a must-win game, while Frank Lampard was forced to watch from the sidelines.

Valencia went as expected, a broad 4-2-3-1 shape minus the influential Ever Banega.

The key tactical focus of this game is undoubtedly Chelsea's shape and system when without the ball. Unlike other big games against Arsenal, Liverpool and Manchester United, Chelsea sat back without the ball to create a 4-5-1 predominantly most of the time, with little to no emphasis on winning the ball back. There was a big emphasis however on lighting fast counters, which while as a pure system is unseen this season, (bar the second half at St James Park Sports Direct Arena) is still a central part of our system. To clarify, Villas-Boas' main focus is on winning the ball back high up the pitch and then spreading the ball at a high tempo in attack - however he still allows for countering as a secondary measure of attack.

In essence, the main difference was that the wingers dropped goal side of their men to create a flat four in midfield, and Oriol Romeu was less defined as a holder than usual. Villas-Boas spoke about his approach at length in the post match conference, and spoke about how the defence and midfield were aiming to narrow the space between the lines. He also spoke about the contrasting approach away from home against the same opposition, and spoke about how Chelsea pushed up and there were lots of spaces between the lines. This was indeed true, and suffocating Valencia was a good move, thanks to the early goal.

Space between the defence and midfield has been a big area of concerning for Chelsea this year. Today's defensive effort wasn't dissimilar to our approach at Old Trafford against United, when Raul Meireles played holder. During that game he was frequently stranded in an open pocket of space, which Nani take full of advantage of by cutting inside and taking a long range shot. This underpins the importance of defensive cohesiveness and closeness against opposition who will take their chances.

Furthermore as a side note, the United game was really a case study in taking your chances and as such Drogba's well taken first goal shows what a difference scoring makes. Sounds simple, but it was a complex theory against United for Ramires which really put us on the back foot after they took their opportunities.

Returning to the line about holding a low block and shape, Oriol Romeu had a good game, except for a few missed tackles and off passes. These flaws were made less prominent by the fact that in contrast to previous matches where mistakes lead to clear opportunities due to a lack of cover, here the tight defensive structure covered for him. This is where John Terry excels and hence his good performance. 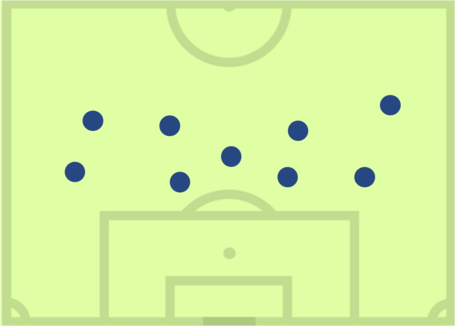 In statistical terms, the average positioning of Chelsea's players gives evidence to the change in tactics.

Chelsea allowed Valencia to have the ball - 69% of it - and when recovering the ball, the default mode of attack was an organised counter where firstly Ramires would break through the middle, dragging away either Costa or Albelda in the Valencia double pivot and opening up space for Mata to come inside. Then either Drogba, Sturridge or Ramires would continue a run through the middle, with another coming down the wing. This gave Mata two options - either out wide or through to Drogba. 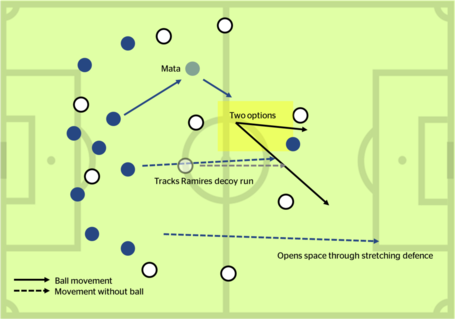 This strategy makes the best and most of Chelsea's attacking trio, and although it may seem simple, as we've seen too often, execution can often be the hardest thing.

Straying from the philosophy is often a managers' bane and curse, but Villas-Boas may have seen it necessary as to preserve his job. The question will be now, ahead of a tough match against Manchester City, is whether or not you continue with what worked against similar opposition (but of lesser quality) or return to the original system.

Keeping the system wouldn't be overly good for players like Mata and Sturridge, who are fast becoming our most pivotal. Their eye for a ball and speed respectively are combining well in Chelsea's play on the flanks, with the varying approaches adding variety to our play, unlike last year where Anelka, Malouda and Kalou all played in vaguely the same vogue. Different approaches on the wings is almost a must for success - a good example is Manchester City, where David Silva and Samir Nasri, like minded players in that they come inside to create, struggle when playing together. City are much more functional when James Milner or Adam Johnson plays on the opposite side to Silva. Another example is Barcelona, where David Villa and Pedro vary in their attacking, where Villa predominantly comes inside and Pedro looks to cover the width of the field.

Tonight Mata did play well when he came inside, as illustrated by the diagram above. However it required him to drop deeper and asked him to take on the opposition more than he usually does. While he does have the potential to beat a player, as seen against Newcastle, Everton and Norwich [off the top of my head] it's not his strong suit. Early on he struggled a little when with the ball in his own half and being required to do his work from there. The reason he works so well is that he can pull defenders away with his excellent movement, and a deep defensive framework doesn't readily allow this so much.

Sturridge was nowhere near as influential as he was against Newcastle, often being too selfish with the ball and not really creating and executing to the extent he was on the weekend. This can be attributed again to his deep positioning, which required him to go outside the defender a lot more than usual, rather than his favoured inside. He misplaced a few passes and struggled to find support. This may have lead to frustration and the selfishness we saw when he went for goal instead of the men in the box.

Emery was disappointing in his tactical changes. He went for his usual setup, and was perhaps unlucky to be 2-0 down, more or less at no fault to the way he set his team up. He was faced with the task of bringing Valencia back into the game at a rowdy Stamford Bridge no less, and he went for the tried and tested method of two up top. It wasn't goal scoring that was Valencia's problem; it was creating chances. This was like Newcastle - the players probably could convert had they got opportunities, but dominating possession means little if someone can't influence. This is also, to an extent, similar to Chelsea last year where we lacked a cutting edge in midfield.

Rather than sticking another striker on the pitch, something Pardew is accountable for too, it would have been [in hindsight] better to introduce either Pablo Piatti or Pablo Hernandez into a position where they could get the ball. Valencia were seeing enough of it to manufacture something, and if anything, losing the extra man in midfield made the job of Meireles and Ramires easier.

Villas-Boas only made one significant tactical sub, bringing Mikel on to secure the midfield and creating an overly defensive double pivot - but in a good way. A good first half, and ponderous and inefficient possession made life easy in the second half.

Did Chelsea compromise the principles? Yes, but one game shouldn't be a cause for alarm. It might be easy to fall into the trap of saying that we should revert to this system more often, but there's a lot of factors that meant it worked tonight.

Firstly, Valencia had imperative to take the initiative when in possession as they also needed a win, and hence there was space and opportunity for Chelsea to counter. A team like Wigan, who would be happy with a draw, might not concede so much space in behind.

Secondly, we are adapting to a completely new way of playing. The notable contrast in tactics shows as much; if the difference is so noticeable, and thus changing the style permanently would/must be difficult. Players like Drogba and Terry are still going to be good at the old style.

Finally, we got a little bit lucky. We scored early on even though Alves got a hand to it, and Ramires goal came as as a result of poor defence by Victor Ruiz. Had these not been taken, the game might have been completely different.

It's not always about tactics. The determination to win on the night is as important as any double pivot or inside forward. Villas-Boas hit the nail on the head in his post match conference.

'In the way we set out our philosophy, there are human values that you cannot forget, and today they showed themselves to an unbelievable amount. It was a different strategy but the same philosophy when it came to human values.'