It comes down to tomorrow. One night, everything on the line. For Villas Boas, maybe his job. For the rest of us, our sanity. More, after the jump: 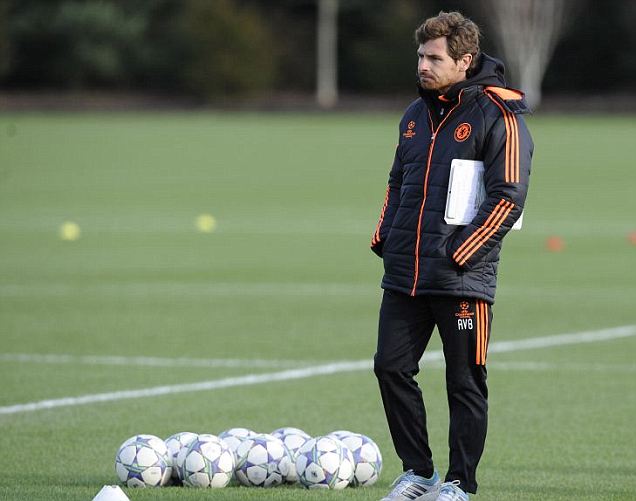 By now everyone is well aware of the script. Chelsea need a resounding victory or a bore-draw tomorrow to ensure safe passage into the knockout phase of the Champions League. If you're wondering why we're teetering on the brink of elimination, and looking perhaps for reasons, you needn't look any further than our up-and-down play over the last two months. It's been that kind of a season, one riddled with inconsistent displays and the specter of 'transition' hanging over our squad and club. Regardless of what events conspired to place us at this very moment, we have to accept the realities of the situation. It's our time now to exorcise the demons of the past two months, and put a resounding stamp on our intentions going forward. Winning at Newcastle, while serendipitous and fortunate as it was, gave us a bit of momentum to take into this match. It will be interesting to see how AVB decides to line up against a Valencia squad that we, in all fairness, should have defeated comfortable several weeks back. On to the specifics:

Why: This answer speaks for itself. Because we have to. If our prior matches were not necessarily 'must-win' (and I agree with that assessment), then this is certainly the antithesis. Losing would render us competitors in what is now the mighty Europa League (featuring Manchester City and potentially United this year). Losing would give our beloved owner a solid reason to sack our new manager, and would certainly upset the reputation of our club as being dominant. Losing could cost us a number of senior squad players this summer (with many electing to move to new clubs and play immediate CL matches). Losing would, well, basically be the worst possible thing to come out of this match. Nothing short of a win will suffice. A win, I don't care if it's by the skin of our teeth, through an own-goal, or whatever other incident you can conjure. Just win baby. Just win. RIP Al Davis.

After the Newcastle victory, AVB confirmed our suspicions that Nicolas Anelka and Alex have been banished from all first-team related activities while their individual transfer requests have been accepted. Both men are handling the news like professionals, even if the press has done it's best to sensationalize the story into something more dramatic. Nevertheless, we can remove these two from contention going forward, which opens up spots on the bench for other players to feature. With no new injuries to worry about save for our long-standing ones (Essien), AVB will have a relatively full squad to make his selections from. I'm of the opinion that 'if it ain't broke, don't fix it' and considering our performance against Newcastle, I'd have to return to The Bridge with the bulk of players that featured. I understand that AVB has a penchant for rotating between competitions, but I think this is one of those matches (and one of those stretches during the season) where the best XI have to play match after match, regardless of days in between to rest. I know we have some creaky knees and some old bodies, but these men have got to soldier on and rally. And of course, they have to put in one hell of a shift to guarantee our advancement to the knockout round. 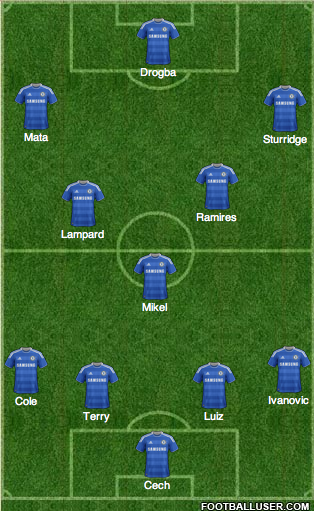 I'm expecting AVB to bring Obi Mikel back for this one. Romeu has played three matches in a row, and might be due for a rest in this case. I understand how essential he has been to the side, but I fully expect Obi to put in the shift of his life if selected. You can bet he's been stewing on the sidelines for the past two weeks, quietly fuming over his reduced role. Perhaps this is the impetus he needs to showcase his worth, and make that position one of high quality competition. As wonderful as Romeu has been, and trust me I'm totally drinking the Kool Aid, Mikel has proven to be a valuable servant to the cause and at many times one of our more influential players. His size and physicality will help us establish a tempo from the get-go that will be more skewed to possession football, which I feel is mandatory for beating a squad like Valencia. Elsewhere, I feel you've got to continue with Didier through the middle, seeing as how he's beginning to show signs of life. Danny and Mata select themselves, while Frank and Rami do the same. Also, not sure why everyone is so keen on scrutinizing all of Frank's reactions, but honestly, this whole mess of him being upset is such a non-issue. If he was satisfied with being subbed off at 60 minutes, I'd be worried. But he's a competitor and naturally he wants to play as many minutes as possible. Expect him to do what he did last time we faced Valencia, under a sea of pressure and expectations, be played a fantastic match and scored. I'm thinking he replicates the magic once again.

With respect to the defense, let's discuss the elephant in the room. Bob. He's out for the City fixture, and his form has been a hit erratic at times. He has moments of pure joy, and moments of pure chaos. On Saturday, it was a mixed bag for him. But I think I'll agree with those that say he has the total package and raw ability to become one of the most intimidating defenders in the PL. I'd expect him to line up next to JT for this one.

On Saturday, we saw a different Chelsea attack. Our moves were predicated on quick counters, and rarely if ever did we see our fullbacks galloping up the pitch to join in the attack. Rather, AVB went to great lengths to ensure that his defenders stayed back and covered their lines. Perhaps an indication that the dreaded high line has been temporarily shelved in favor of results? I'd say lets not get carried away. If anything, Ashley seems to have been rested and will be ready to rampage down the left flank against Valencia. As I was discussing the Newcastle result with my best friend, The Doc, he brought something to my attention that I failed to notice at the time. Each time a single defender would get forward, the remaining three and Romeu would drop deep and cover well behind the play. I guess the memo was handed down in advance, to stay back and protect against any forward intrusions. Either way, I like what I saw. I know we were incredibly lucky not to concede a few goals, but we were also incredibly unlucky to get stopped by an in-form Tim Krul (Danny should have had at least four goals). Whatever the lineup, I'm expecting AVB to have it slightly modified for this match, with an increased emphasis on the full backs getting involved relative to the Newcastle match.

I want to talk about Robert Soldado. I need you all to be aware of the threat he poses. The dude has been in sublime form this season, netting 14 times in all competitions for Los Che. He's not just ramped up and playing fantastic footy, he's also making plays for others on both ends of the pitch. I wouldn't suggest Bob man-mark him per say , but the defense needs to key in on him and have a plan in place to slow him down. Putting John on the job might not be a bad decision, considering he showed glimpse of his old form on Saturday. We know John's not a speed merchant by any stretch, but what he lacks in quickness he makes up for in positioning and awareness. Can't tell you how many times on Saturday he was in the right place at the right time. Handing him the Soldado assignment might just be what we need to guarantee movement to the next round.

Valencia won their last two home CL matches, but have had their difficulties on the road this season. The Blues have never lost to Los Che, in five total tries. With tomorrow marking the sixth fixture between the clubs, I hope we can extend the unbeaten streak and come off with a resounding victory to further fuel our drive towards City next week. But wait, I'm guilty for looking ahead there. I can't do that, and neither should you. Used to be that we could feel confident about these mid-week matches and glance forward to look at the future. But we don't have such luxuries any more and we can't for a second assume this match is an easy ask. It will be tough, Valencia will be going out to score (a bore draw does them no favors). They won't be parking the bus, and there will be space on the counter for quick strikes. It falls to our crop of players to step up and produce a result. It falls to our manager to field the best possible side for producing a win. It falls to us as fans to rally behind the squad, and make Stamford Bridge a fortress once more. I'm tired of losing at home. Just plain sick of it. It's time to restore the reputation of The Bridge as an intimidating ground to play in- regardless of the competition.

This is our moment to rise above the critics and doubters. This is our time. This is our opportunity. We must seize this moment- failure is simply not an option.