In my usual Opposition Scout Reports, I look at how our opposition has performed in recent games. Current form, statistics, tactics, insightful analysis, bla bla bla...

However, the Champions League game between Chelsea and Valencia is a momentous occasion with serious consequences. So, I thought why not look at the last BIG game that Los Che has played -- their entertaining encounter with the Spanish league leader Real Madrid. Maybe there are enough interesting lessons to be learned from that one game. Maybe our old coach Jose Mourinho has some tips for his protege on how to beat Valencia.

So, I took my old format, trashed it, stumped on it, spat at it, laughed at it. And came up with... this! 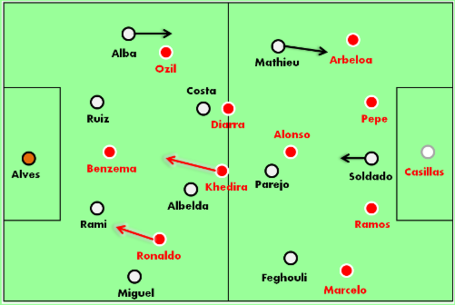 As far as formation is concerned, there was little change Unai Emery's side as they went out with their usual 4-2-3-1 -- Soldado led the attack with Mathieu and Feghouli providing support from the flanks. But there were some personal changes (which is usually the case under Emery): Parejo got a rare start right behind Soldado while Costa partnered Albelda to anchor the midfield triangle.

More interesting tactical move came from the visitor as Mourinho flipped the midfield triangle of their usual 4-2-3-1 and switched to the 4-3-3 shape that he used when he was at Chelsea. Alonso stationed at the tip of the inverted midfield triangle with defensive-minded duo Khedira and Diarra at the base. The shape is almost like a Lampard-Essien-Makelele midfield of Chelsea under the Special One but the difference, obviously, is that in Real's formation, two defensive players are pushing ahead of a more creative player while in Chelsea's, one defensive man anchored two attacking players.

First, this switch allowed Real's midfield trio to match that of Valencia -- Khedira and Diarra against Albelda and Costa, and Alonso against Pajero. Second, Khedira and Diarra did all the leg work for Alonso, which left the Spanish midfielder with only one duty -- find the long pass to Real's forwards, especially to Benzema. Thus, it allowed Real Madrid to play very direct football, dropping balls behind Valencia's back line. It worked as the visitors dominated the first half and took the lead. A quickly taken Alonso freekick (a long ball) found Benzema who pounced on the napping Valencia defense and scored.

If Chelsea were to adapt to that Real Madrid's tactics, we could stick to our usual 4-3-3 with the midfield trio of Lampard, Ramires and Meireles. Lampard and Ramires could do the leg work like Khedira and Diarra while Meireles could assume the Alonso-role. And we will need to start with Drogba up front. Plus, Lampard already does what Khedira did in that game -- making forward runs and joining the attack.

Valencia's Threat from the Left

Valencia has a formidable attacking threat on their left side with Mathieu as the winger and Alba as the fullback. They used that to their advantage against Barcelona, against Genk and against Chelsea in the first leg of the Champions League. Thus, it was interesting to see Mourinho putting defensively light Ozil on that side of the pitch. Just as Mathieu and Alba dominated the left side when Villas-Boas put Mata on Chelsea's right side in our first meeting, the left-sided duo was a constant threat to Real Madrid. Almost all of Valencia's attacking adventure took the route on the left flank, even if the initial move started on the right. 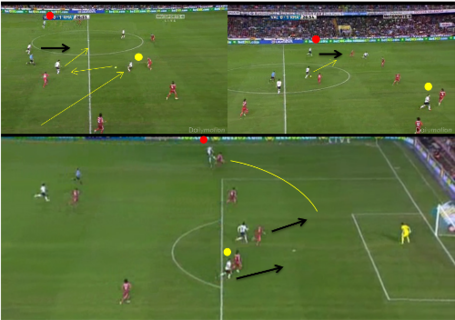 In this particular example, Valencia won a misplaced pass from Ramos and started a counter attack. The ball found Soldado (yellow dot) first and it was eventually shuffled to the left where Mathieu (red dot) was. Poor tracking from Ozil allowed Mathieu to bomb forward as he pleased. He provided the cross for Parejo whose header was slapped away by Casillas for a corner. It is interesting to note the kind of hold up play that Soldado is capable of: he dropped deep and got his midfielders involved.

Between Sturridge and Mata, I think the former is a more defensively responsible player (although he has had his moments). So, I think Sturridge should be on Chelsea's right flank as he has been recently. However, it wouldn't surprise me if Villas-Boas bring in Malouda to that flank to tighten up the defense against Valencia's threat. Whatever AVB does, I don't think Mata should be on the right like in the first leg. 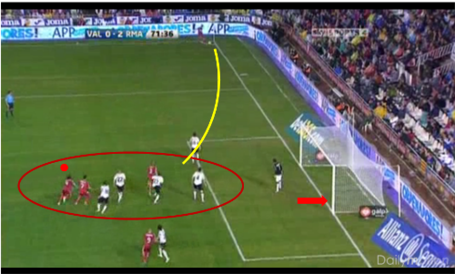 Valencia started the second half brightly but it was Real Madrid who doubled their lead with a superb glancing header from Ramos. To be fair to Valencia, it was a great header, almost un-defensible like the second Bayer Leverkusen goal against Chelsea in the last Champions League game. But Valencia's zonal defense system made them vulnerable to Real Madrid's set-piece approach.

Madrid had only four players in the box: Ramos (red dot), Ronaldo and Pepe lined up centrally with Benzema hanging in the far post. In a sense, Real Madrid overloaded the central area, although Valencia still had a man advantage. When the corner was taken, Pepe (the closest to the six yard box) ran towards the near post dragging a defender with him, which essentially created the space for Ronaldo and Ramos to run onto. Ramos climbed high and nodded the ball into the unmarked far post.

If Chelsea wants to take advantage of such scenarios on Tuesday, we will need to start with Terry in the back. The Chelsea captain has been in good goal-scoring form from set-pieces this season and it will be tremendous to have his aerial ability in the box for Chelsea's set-pieces. To put even more pressure on Valencia in these situation, it will also be wise to start with Ivanovic as the right back, so that he can also join Terry and be an extra threat from set-pieces. Plus, defensively, Ivanovic will line up better against Valencia's aforementioned threat from the left. 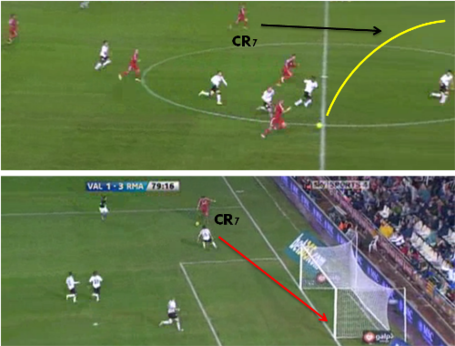 After Real Madrid went 2 goals up, Valencia pulled one back with Soldado's strike. But the visitors extended their lead back to 2 goals with a quick counter attacking move which ended with Ronaldo shooting at an open goal. As pointed out in the match analysis by Zonal Marking, this quick counter attack, from Madrid's box to Valencia's end, took a total of 12 seconds and it highlights the approach that Mourinho's team took that night -- play direct football, defend deep and break quickly.

We have seen Chelsea did that in the last couple of league (especially against Newcastle). If we can continue that against Valencia, we will have a better chance of stopping Valencia's attack (because we defend better from deep position) and of scoring at the other end (a la Sturridge vs Newcastle).

Valencia's Never Give Up Attitude

This game should have been an easy win for Real Madrid if not for their lack of concentration when they took the 2 goal lead twice. Valencia came back twice to narrow down the lead to one and almost equalized in the dying minutes of the game. It is partly due to the tactical change by Emery but it is also the result of the never-say-die attitude that Valencia has. And their on form striker Soldado personified that attitude in that game. He was always in the move to initiate an attack. He was always chasing loose balls. He was always looking to run in behind the Madrid defense. It paid off for him because he scored both of Valencia's goal in that game. This game should be a good warning sign to Chelsea -- even a solid two-goal lead will not be secure against Los Che. Even if we were fortunate enough to take that kind of lead, we must not lose concentration or we will be punished.