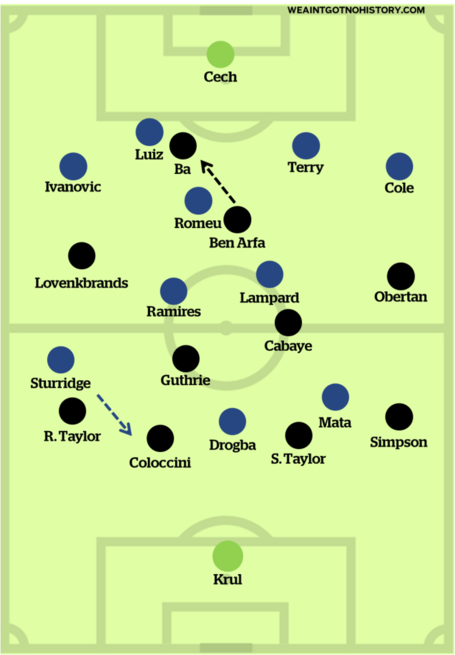 Chelsea got the better of a high flying Newcastle, but the scoreline betrayed what happened in an enthralling end to end clash.

Andre Villas-Boas selected Didier Drogba to lead the line, and the only other selection of any real surprise was Oriol Romeu in the holding midfield role for the third time in seven days. Newcastle had to make do without Chiek Tiote and Jonas Gutierrez, who were replaced by Danny Guthrie and Peter Lovenkenbrands respectively. Ben Arfa played in the hole.

The momentum of the match swung from side to side, but Chelsea were more complete for more periods of the game, took their chances and defended doggedly. Newcastle, for all their stellar early season form, showed the gulf that exists between pretenders and contenders; those serious about Champions League qualification have the depth in their squad to ably cover missing players. The replacements for Tiote and Gutierrez just didn't met the standards of their predecessors that have helped propel Newcastle to the upper echelons of the Premier League.

It would be remiss to talk about this match and not acknowledge all the non-tactical features that could have changed the game, however they didn't happen, and as such things did happen with the events that did occur.

Newcastle set out with a 4-4-1-1 system where Ben Arfa had a free role, only restricted in his brief to add a third number to the midfield, and more importantly, track Oriol Romeu. It's not surprisingly to see this happen, as many managers use the same methods to even the numbers in midfield, but it's always hit and miss on whether it works. An example of it working very well was when Wayne Rooney hassled Jon Obi Mikel aganist United at Old Trafford last season, and an example of it working poorly was when Kevin Davies vaguely attempted to drop onto Meireles when Bolton came to Stamford Bridge.

Ben Arfa was somewhere in between - Romeu occasionally got space between the lines, but his job is to efficently dispatch possession and so it wasn't a huge deal if he was given space to pass. However, he did start to assume more responsbility as he realised the oppurtunity he had, and looking to move forward and pass through the defence. This coincided with Ben Arfa occassionally gaining time in the attacking third in front of Chelsea's defence. This ties in with what Villas-Boas said earlier in the week about his number 6. After a few misplaced through balls but more importantly just general Chelsea superiority possession in midfield, Ben Arfa started tracking Romeu a lot more but as a counter his influence waned. This probably led to his substitution at the break - but Pardew probably wanted to go more direct, having fallen behind.

This was one element of the midfield battle. The second match up was the two midfielders that either side looks to provide attacking impetus - Lampard and Cabaye. Both were wary of each other's threat and took to chasing each other around the field. Cabaye during the later period of the first half particularly would not let Lampard out of his sight. Lampard's reciporcation tired him a lot earlier and hence probably was why he was subbed. Cabaye's tracking made Lampard a lot more influential, and the same with Cabaye in terms of Lampard's tracking. Cabaye pressed better, and while this was good on an individual level, on a collective level it didn't work due to the behaviour of his partner.

Guthrie is not Newcastle's first choice in the midfield, and you could see why. Where Tiote is a snapper and hungry to win the ball, Guthrie was very restrained and sat deep in midfield. It's not overly clear what he was sitting deep for - perhaps a combination of compensating for a striker-cum-winger in Lovenkbrands and covering for Ryan Taylor, who was poor against Manchester City.

What this did though was open up plenty of space for the energetic Ramires, who played a very good box to box role, often finding lots of room to run at pace. It also, more crucially, gave Mata breathing space behind Cabaye and next to Guthrie. As a result Mata came extremely central and looked to play Sturridge in behind the struggling Taylor. Had Johan Gutirrez not been suspended, the game may have been completely different. Gutierrez works very hard in defence and accounts for Taylor's indescritons. Lovenkbrands wasn't very useful at all from a defensive or offensive viewpoint, and was promptly subbed. The right flank for Chelsea was really the match winner - as which we all already knew thanks to CareFree Chronicles.

The left flank was, by contrast, a weird scenario. In essence, it didn't exist. Obertan pinned back Ashley Cole and as such the full back did not inject much width into Chelsea's attack, but given Newcastle's vulnerabilties on the right it wasn't really necessary. Mata drifted away from his flank, and Simpson rarely pushed into the vacant space. Had he done so it may have given Chelsea problems.

The second half opened up with a period of Newcastle dominance, and as a result the Chelsea defence dropped a lot deeper. There's an interesting question to be asked here: was this a Villas-Boas decision or a reactionary measure to being under immense pressure?

The whole defensive line was pretty deep (considering) across the whole game, which seems like a strange tactic when you're facing physical players like Ba, and later, Ameobi. Regardless, this "coincided" with John Terry's best performance of the season, and also, when we sat deeper, Luiz was actually a lot better. He used his pace to good effect to make a few good interceptions, reminscent of his game against Manchester City where he cut out a lot of the supply to Dzeko. It's oft said that Luiz works best under the new system; but does he? This defensive set up was a lot like Ancelotti's Chelsea; drop deep, narrow, let the wingers do the work. Is Villas-Boas starting to adapt his tactics to his personnel ahead of some crunch games?

Just before Lampard was subbed, Cabaye had started to ascertain control with a few nicely picked out diagonals across the pitch. The introduction of Meireles was a good move, freshening up the midfield and entering a player who can take good control if he is in on form. Cabaye's influence waned yet again and Meireles picked up steam, finding Sturridge and Torres on several occassions as Chelsea countered late on. Looking at Meireles chalkboard on the right, it's interesting to see the passes he makes down that left flank. It's curious to know whether or not he was looking to play it down that wing on purpose or if it was just happening because of the lack of action on that wing.

Replacing Mata with Kalou was, in hindsight, a good move. Kalou injected some width and fresh legs on the vacant left hand side, has a knack of picking up goals from the bench and works hard in defence. Mata was also looking a little tired, maybe as a result of working hard(er) in defence. This is evidenced by the three tackles he made. Netherless, it was good to rest him for Wednesday.

Newcastle showed why they won't stay where they are for long. They lost key players and as a result they fell at the wayside. Yes, they did get unlucky, but this was a good performance from Chelsea, and in particular, the 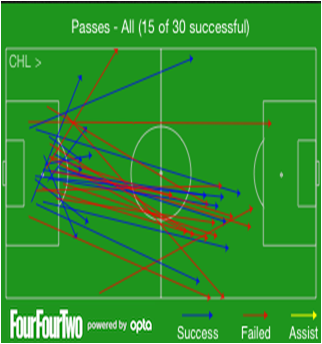 combinations between Mata and Sturridge were particularly pleasing. Romeu is maturing every game, and a settled back four is working dividends, with another clean sheet. The elephant is still in the room though - Drogba or Torres? It depends on long term sustaniability - who works better in the system? Do they add to the system?

A final Chalkboard - last week we spoke about whether or not Drogba contributes to a direct style of play. We took Cech's distribution as one measure (not an absolute) and found it slightly inconclusive: more evidence here, but again, you can intrepet how you want. After all, we were under pressure and wanted to get the goal far away from goal as possible...and then again it is tempting just to belt it to Drogba as a target man...

Tougher challenges lie ahead - but this is fresh cause for optimism.

Apologies for the lack of a cheesy headline!