ARE YOU NOT ENTERTAINED? 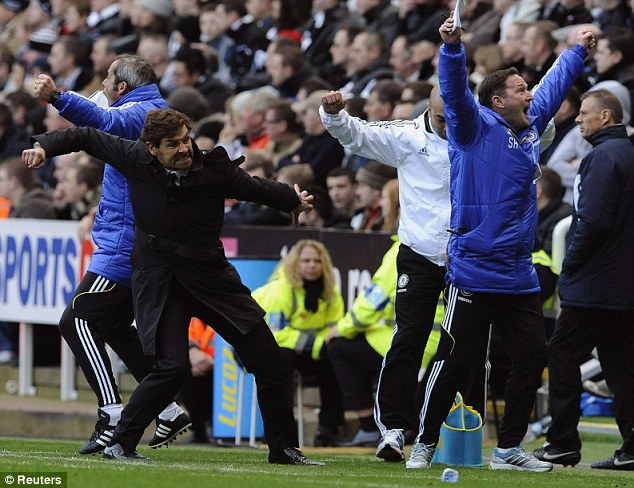 Well then. That was something, now wasn't it? If you're looking for high-octane end-to-end stuff, this was the place to be. If you're looking for lots of shots, this was the venue. If you were looking for improvement, this was certainly a good place to start. If you were looking for a win, this was where to be. I'm not saying it's all fixed, but, at least we were able to see some signs of improvement and a couple of solid attacking moves that could lend itself to the development of some real momentum at a time when we need to be at our very best. Can't give a running diary this afternoon (in the process of packing for a month-long trip to the motherland) but I'll steal Jack's mojo and offer up a 'Fast Five' for your consumption.

Well color me surprised. I certainly didn't expect AVB to mix it up to this degree. For what seems like months, he's been preaching patience and understanding as he works to integrate the squad into a style that involves the dreaded high-defensive-line which has seen us capitulate so many goals it's hard to keep track. Alas, on this afternoon, we saw the strategy somewhat evolve. The defense was instructed to stay rigid, and the full backs, particularly Ashley, were rendered inept in the attack. In fact, I can hardly recall seeing Ashely get up the pitch and involved in anything offensive. Not saying it was a bad game on his part, but, clearly, the plan was to stay in tact- particularly after the first goal was netted. Whether AVB elects to keep this in his pocket for future use, or is suggesting that this might well be the way we play going forward, remains to be seen. For what it's worth, this was one of our best defensive performances of the season for a number of individuals, but not with respect to the team as a whole. More on that later.

Most of our work on offense came on semi-counter and full-blown counter attacks. Strange. Unlike previous outings in which we've had to manufacture goals from pass-and-move performances, here was a match where the chances came quickly, and often- on both sides of the ball. Anytime we went forward on a counter, Krul would produce a save, and Newcastle would be off on their gallop attempting to pull one back. It was an energetic and enjoyable to witness, and certainly underscores the necessity for having players in the side with more speed. Frank, I love you- but you can't be too miffed about getting substituted on 60 minutes. Missing the penalty in the first half, his second miss of the season, wasn't great but you played a full 90 in midweek and we need you against Valencia. Chin up.

For the third consecutive match, AVB started Oriol Romeu in the holding slot, in which he once again exceeded expectations. I can only recall two instances where he put a foot wrong. Otherwise, he was solid, reliable, quick on the ball, and played passes across the park with relative ease. Can't believe he's only a precocious 20 years old- the future is so bright for him. Hurts to realize that we have the potential to lose him down the road if Barca exercise their right to bring him back. But I don't want to focus on that just yet. I just want to praise the kid for succeeding in fulfilling the expectations of the position- i.e. someone that has TWO feet, can play the ball forward or laterally, has excellent vision and positioning awareness et all. Kid is really something to behold. At this rate, I'm grabbing his kit come January.

Elsewhere, AVB restored Didier to the attack, and it would appear there is life in the old Drogs yet. A beautifully taken header after connecting with a lovely cross from Juanito produced our first goal of the match. Good to see him get on the scoresheet- clearly AVB has plenty of faith in playing Didier (and I would expect that the Anelka and Alex news will result in Didier extending his contract for another year). Danny also returned to the side, and had himself quite a game. Call it selfish if you must, I'd call it incisive- minus the finishing aspect. I counted at least six clear chances on goal for Danny that had Krul doing his best Superman impression to keep out. Poor Danny looked like he was going to end the match minus a goal, but alas, he knocked one in just before the death to increase his tally to 8 on the season.

We might not be playing in conjunction as a thriving unit, but there have been some decent shifts from a handful of players over the past two months. In particular, England's Brave had himself one heck of an afternoon. For weeks, he's been criticized for a handful of shaky demonstrations, leading some to suggest that his best days were well behind him. But on this day, John was simply brilliant. His timing on challenges was perfect, he cleared his lines while Bob went foraging for goals (more on that later) he threw his body into the tackle, and commanded the defense brilliantly. A 5-star performance in my eyes for a much-maligned player. This was his redemption song, and it was nice to see him contribute more defensively than offensively for a change.

I already touched on Oriol Romeu's performance, but I'm also going to mention the lovely display by Juan Mata. My word- this guy is just something else. He's had his difficulties against more physically imposing squads, but today he used his speed, technical ability, and trickery to find channels to run through, and put passes all over the pitch to get the squad going in attack. Job extremely well done I must say. We have some excellent pieces in this squad that, if built around, can create a side that's incredibly competitive and combative on both sides of the pitch. A tip of the cap to Danny for creating so many shots on goal, Bane for putting in the deflected cross that created the first goal, Nando for not being selfish and laying off an easy finish for Kalou, and Ramires for running his ass off. Dude will literally run through a wall for the club. Gotta respect the hell out of that.

AVB brought Meireles on for Frank on 60 minutes, then replaced Juan with KALOUUUUUUUU and finally Didier with Nando. The three subs entered the fray and put in a solid performance. Nando had a couple of good runs forward, demonstrating some of that trademark speed we've come to expect from a player of his caliber. Again, the finishing wasn't there and he didn't look all that confident once he squared to take shots. I suppose that will get better, but I credit him for laying off a nice pass for Sala to net the second goal of the match. Meireles injected more pace in the midfield- next to Ramires and Romeu, that trident might be our 'fast' lineup.

Moment of applause for Kalou. Yes, I pined for him to get some minutes. And yes, some of you thought I was completely bat-shit crazy for suggesting that he was more deserving of minutes than others. But alas, he pulled one back, put the game to bed, and looked decent in possession. So, haters. Your move.

Okay, I'll admit that Luiz should have gotten sent off in the fourth minute. I'm not sure what he was doing on that challenge but he was clearly caught out and succeeded in wrestling Ba to the ground instead of making a clean challenge. Somehow, Mike Dean and company elected not to send him off. Yay. We were more than lucky with that one, and good for us for a change to get the calls in our favor instead of finding ourselves on the receiving end of another card. We're obviously doing ourselves no favors playing it so fast and loose. Luiz does need to clean that bit of his game up, but lets not slag him off quite yet. After that calamity, he calmed down and had himself a quite solid second half- where it didn't seem like he put a foot wrong. With news that Alex is now on the way out the door, you can expect that Luiz will be getting more chances to showcase that trademark speed going forward. I still cringe whenever he gets on his gallop but you gotta admire the gusto the kid has.