While you ruminate over the fate of Chelsea, AVB, life, the Universe, and everything that hinges on the series of games starting tomorrow, check out what your lovable chums in Blue have been up to over the past month. By the power of statistics, I shall drain you of all emotion and make you a hollow robot-shell ready to face the challenges ahead!

Are you worried that tomorrow is not the day that Demba Ba realizes that he's not the Senegalese George Weah? Well, come marvel at the ineptitude displayed by our two main strikers! It can happen to you, too, Demba!

Are you worried that the old guard can't cut it anymore? Come and let the Castrol Rankings tell you otherwise. Florent Malouda is the 16th best player in the world!!! Crisis solved!

Are you worried that the future is bleak? Come see the promise of Romeu and Ramires and Sturridge! Some of whom may even play tomorrow, unlike Josh the Basket-dweller. You should've kept him wrapped up and protected, AVB!

Uh-oh, my emotion chip is overheating. Must. Have. Numbers.

Only one minor improvement for this month: the addition of WhoScored.com's magical player ratings (magical because they appear out of nowhere!) to complement the insanity of Castrol's rankings, and the pure unadulterated hate of The Guardian's Ratings (made possible by viewers like you!).

WhoScored does have a couple other things that I would've liked to include, but I kept getting distracted (damn you, FM 2012!). 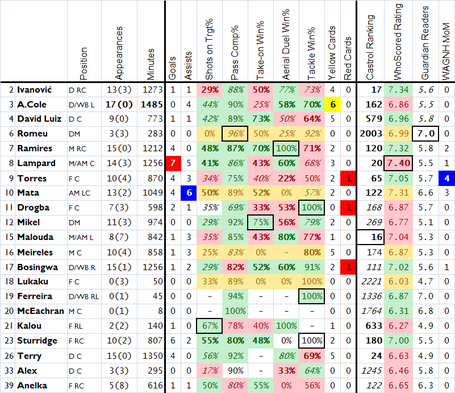 Ashley Cole continues to rack up the minutes as if we didn't have a capable backup ready to go for him (we don't), while John Terry has clambered up to second place in the minutes played column (no doubt to fall down again at some point). With the lack of Carling Cup data, Josh McEachran & Romelu Lukaku still don't have any meaningful numbers available, but thankfully we've started giving young Oriol Romeu some quality playing time.

Juan Mata takes over the lead in assists with 6, while Daniel Sturridge closes the gap to the ever-present Frank Lampard in goals scored. Meanwhile, Nicolas Anelka starts wondering when/if he'll ever get another start. 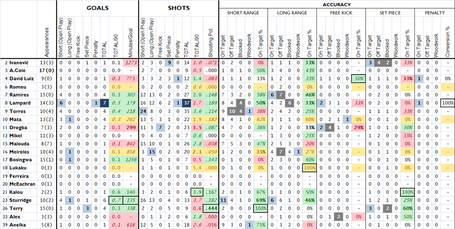 Considering that we barely averaged over a goal scored per game in November, it's no surprise that this table is a little depressing. Averages for goals & shots are down compared to October almost unilaterally across the board. Didier Drogba does provide somewhat of a bright spot (as long as he doesn't take any more free kicks), but that's probably more due to the fact that he actually got some minutes this month than anything else.

Florent Malouda, that bastion of excellence according to the Castrol Rankings, remains pathetic with a 0.038 shooting percentage - and considering that he's essentially tied for second on the team for number of close-range shots taken (15; Lampard & Sturridge on 16, well behind Torres on 24), this is doubly pathetic. At least Raul Meireles's almost equally pathetic 0.050 can be explained by the sound of his hopeless long-range blasts clanging against the seats in row Z.

Your passing leaders remain Oriol Romeu and Juan Mata. Both Spanish. Not a coincidence.

We had a good discussion last month regarding Romeu's & John Obi Mikel's passing statistics...I have yet to take a closer look, but I do wonder if the gap/difference between the two has gotten smaller or larger now that Romeu's getting more minutes. 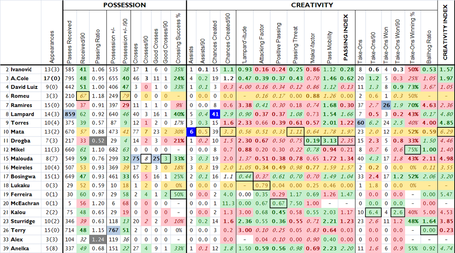 As much as Malouda continues to just approximate a professional football player, he's at least improving. He's clearly still below last season's baseline, but he's getting better. Of course, like Salomon Kalou, he had reached a point where the only way was up, so let's not start ranking him among the top players of world just yet. Oh, wait...

Ashley Cole's numbers are getting better in this respect as well. In fact, he's getting closer & closer to Jose Bosingwa in most of these categories (including that horrendous crossing!)...but what about his defense? 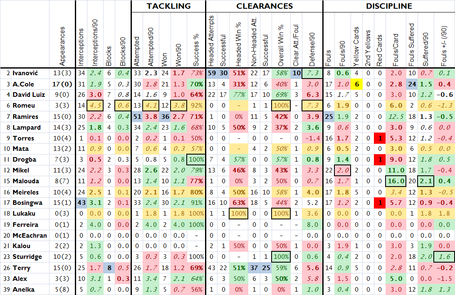 It's not pretty. Cole's numbers are down across the board. Tackling, clearances, overall defense lag behind most of last month and certainly most of last season. They look even worse when compared to Bosingwa. Wait, I think I said the same thing last month. I guess AVB really wasn't THAT crazy to go after Alvaro Pereira, ey?

Oriol Romeu continues to boss this table, with his numbers remaining strong despite an increase in playing time. Is there anything he CAN'T do?!

Let me close with an honorary shout-out to David Luiz, who leads the team in blocked shots per game, but I missed that until now, highlighting Romeu's second place effort instead. So sorry, Sideshow! Also, an interesting thing to look at with Luiz is how his possession/creativity numbers are going down, but his defensive numbers are going up. We saw this on the field when he chose the "simple" solution a few times (clearing it or making the simple pass) rather than something elaborate and crazy. For better or worse, we can see that reflected in his statistics as well...