Luiz vs Fulham: Starting Attacks from the Back

Share All sharing options for: Luiz vs Fulham: Starting Attacks from the Back

David Luiz had a good game, both in defense and in attack, against Fulham. Defensively, he marked Orlando Sa and kept the Fulham striker quiet through out the whole game. On six different occasions (yes, I counted), Luiz won the ball from behind his mark to regain possession and start attack. With Fulham defending deep, Luiz found time on the ball to begin the attack from the back.

His contributions in this game, though, are overshadowed by the result and the way Chelsea conceded the Dempsey, which he is not entirely responsible for. But don't worry! Luiz's solid performance will not go unrecorded. Here at the "cheeky Chelsea FC/David Luiz blog," we will look at a little bit of Luiz magic from the Fulham game. 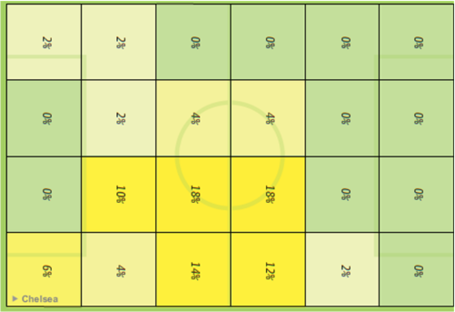 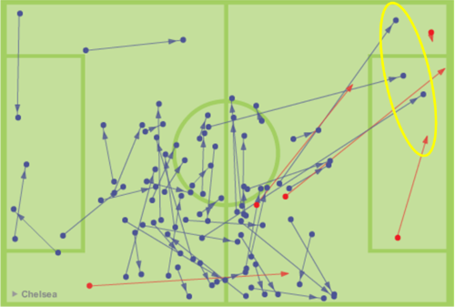 Furthermore, Luiz's passes found teammates deep in Fulham's half. I have circled three of his successful long passes in the above chart. Two of these three passes found Drogba and Torres inside Fulham's penalty box. And here's an interesting statistics: Lampard and Meireles together made zero successful passes into the box from open play in this game. Again, this is partly due to Fulham's approach to the game but Luiz did well in finding his strikers in dangerous position. Let's look at one in detail, shall we? 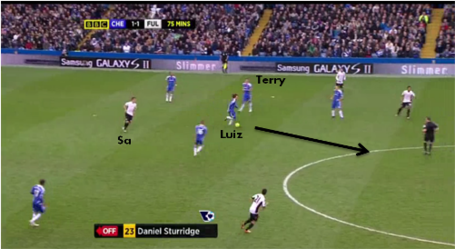 After Fulham has equalized through the Dempsey goal, Chelsea searches for the game winning goal. We came close with this chance crafted by Luiz from the back. This attacking phase starts with Terry getting his head on a Fulham long ball. Before the loose ball can reach to Sa, Luiz steps in to grab the ball ahead of the Fulham striker and the Brazilian pushes forward. 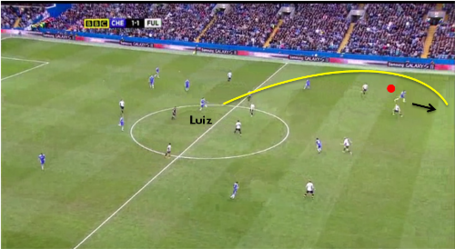 Then, Luiz pulls off this amazing pass from the center circle. His long ball gets in behind Fulham's defense and falls perfectly for the oncoming Drogba (red dot). Out of nowhere, Chelsea has a goal-scoring opportunity. 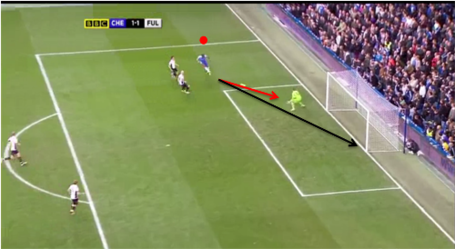 Drogba controls the ball with his first touch but his shot is straight at Stockdale. If the Ivorian's shot has been a little bit toward Stockdale's left, the ball would probably have rolled into the far corner. On a different day, this could have been a goal but it wasn't meant to be this time around.

Despite the end result, we should not forget how Luiz started this move and his overall contributions in this game. I hope we can come back to this post as a reference point when Luiz, inevitable, gets unfairly criticize by the media (and by fans). All I've got to say now is, "Well done, Geezer!"