The latest edition of The Fernando Torres Report is here! In this column, I offer my perspective on the £50m man and his team! Today, I look at today's Premier League match against Fulham.

After a nearly two-month hiatus in the basket with only short trips outside, The Fernando Torres Report is back! Apart from the Carling Cup fiasco against Liverpool, which I think we'd all rather not talk about, Fernando Torres hadn't started for Chelsea since the ill-fated 1-1 draw against Genk in the UEFA Champions League. Until today, anyway, when he played all 90 minutes against Fulham. He didn't score, but looked better than he has in months, and could easily have done so. We're all disappointed by today's result, but I think we were a bit unlucky. I'm not going to sit here and claim we should accept a 1-1 draw at home to our lowly neighbours Fulham, but we were easily the better team today, and Fernando was a substantial part of that. Could he have done better? Of course, but he looked both motivated and more dangerous than he has in recent appearances. Fortunately, Didier Drogba also looked dangerous after he replaced Danny Sturridge. Having two capable strikers in relatively good form can only be a good thing.

I know not all of you found his performance good today, but I think he was one of our best players today. He linked well with Mata, and would have scored a goal worthy of highlight reels if not for the positioning of Fulham goalkeeper David Stockdale. I don't think you can fairly say that Torres was at fault for shooting at Stockdale. He did incredibly well just to control Mata's cross and get a shot off through two defenders. It was spectacular, and frankly deserving of a goal. Even though it wasn't a goal, I think we can all agree it's the sort of thing he needs to be doing to deserve a place in the team.

AVB once said Fernando is in the team not just to score but also to provide. He did that today, with an assist on Chelsea's only goal. He set up Juan Mata by taking down a cross from the left, which Mata duly scored from the edge of the box. To be honest, I didn't think it was very impressive at first sight, but replays showed it to be better than had thought. Fernando did well to take it down at all, but couldn't make anything of it for himself. At his worst, he would have kept trying to make something for himself, losing the ball in the process. This wasn't his best, which would have seen him make something for himself, but I was pleased to see him realise it wasn't there for him find a teammate who was better-placed. It's not exactly great play, but at least it's nowhere near as useless as it was earlier in the season.

Shortly after the Fulham equaliser, Fernando nearly scored again. He was sent through one-on-one with Stockdale, only to be wrongly judged offside in a close decision. He lashed a shot well wide, knowing the flag had gone up. Since it never happened, I can't rightly speculate on how he would have done had he been judged onside, but I think it showed us something we've been missing from Torres. 'Nando has only rarely been able to get in behind this season, so to see him do it today, after so long out, is heartening for me.

He's nowhere near his best, but compared to his brief cameos of the past two months, he was good today. Suddenly, the month of January seems much less frightening. There's no guarantee he can make up

for Didier Drogba getting his Ivory Coast on,* but if he can keep playing like this, he will get himself into form, and start scoring. That is, of course, a rather big if, but I'm happy with what I saw today, and I think he can get himself into some more-permanent form. It is Fernando Torres, though, so making such a prediction is impossible. All I know is that his situation seems far less bleak tonight than it did this morning. If Fernando and Chelsea can start converting their chances, our year of transition will too become less bleak. 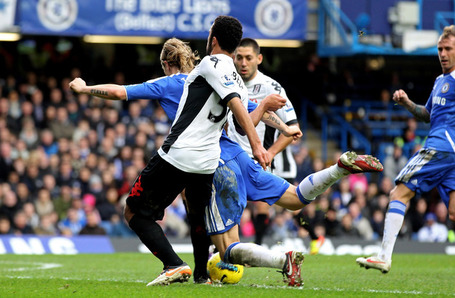 ...or he could just fall down again.

*Thank you, whoever I stole that phrase from.