There's nothing signed and sealed at the moment but it's fair to say there has been dialogue (with Chelsea). I've got to be up front and tell you, as I always do, and that's the situation.

Those are the key words, straight from the mouth of Bolton manager Owen Coyle. Yeah, it looks as if Chelsea is closing in on a deal to bring famously mediocre central defender Gary Cahill to Stamford Bridge. Excuse me if I don't leap with joy at the thought. 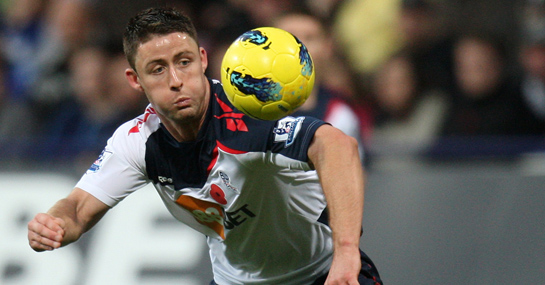 Andre Villas-Boas confirmed twice earlier in the week that the club was monitoring Cahill prior to the opening of the January transfer window. Now, with Coyle jumping into the mix to further support that stance, it seems that it is only a matter of time before the recently turned 26-year-old England international trades up - way up.

A number of media outlets, some of them actually reputable, are reporting that this move is already a done deal and that Cahill's transfer will be announced as soon as the window opens. The fee? Somewhere in the region of £7 million.

That's not bad. Add in the fact that Cahill is English and will not occupy one our coveted international slots, and the kind of cake being discussed seems supremely tasty. Still, I'm not really sold on Cahill. He's never caught my eye; this season, in particular, he's been pretty poor even within the context of having to play in a wretched team. I know he's playing alongside Zat Knight, but come on.

With that being said, I ask: What does AVB see in him? What is the idea behind the transfer?

Is Cahill being brought in as a direct replacement for castaway Alex, or is he fully expected to compete for a first-team position with our current lot of central defenders - David Luiz, Branislav Ivanovic and John Terry. Unlikely. Perhaps Cahill is our in case of emergency, break glass (Terry is found guilty of racist abuse) option.

To be honest, the idea of Cahill being able to displace any of Bane, Bob or EBJT is laughable. So, in that light, it would appear that Cahill would be coming in as a like-for-like trade with Alex. Is he better than the Brazilian? I'm not sure. What he is, though, is younger and English. Pivotal points.

Also, it must said that Villas-Boas hasn't really steered us wrong with his transfer dealings at the club thus far. He's proven to have a keen eye for not only young talent, but bargains (see Raul Meireles) as well. If he views Cahill as a good enough for Chelsea then we probably should, too. Then again, maybe AVB is looking at that price and thinking we can't really pass that up for a serviceable English defender. I can't really argue with that perspective, either.

So, what have we learned here tonight? Well, for one, that Jack is not a massive fan of Gary Cahill. However, we managed to work through that and come to the conclusion that, if signed as a squad player, Cahill represents pretty killer value.  A moderately young English defender for £7m doesn't come along very often - if ever. At the very least, we should be able to sell him on for a profit if it doesn't work out or if he wants pitch time elsewhere.

Of course, nothing is official yet so we may just have had this little conversation for no reason at all. It's cool. Enough from me, what are your thoughts on the potential transfer of Cahill to Chelsea? Let us know people.