Share All sharing options for: Scout Notes from Fulham 2 - 0 Bolton

Chelsea welcomes London neighbor Fulham for the Boxing Day game. Fulham has been on an erratic form this season. In September, they managed to draw against Blackburn, Manchester City and West Brom in row. After beating Liverpool at home in December, they immediately lost to Swansea in the next fixture. Now, they have just lost heavily to Manchester United and no one knows for sure which Fulham team will show up in Stamford Bridge. Just in case you need a break from your family this holiday and want to know a little bit more about what Fulham can offer against Chelsea, here is my scout notes from their game against Bolton. 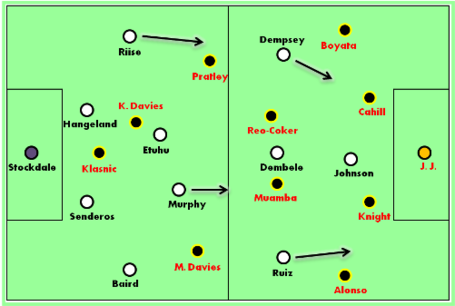 Fulham lined up in a pretty straight forward 4-2-3-1. Johnson led the attack; Dempsey left; Ruiz right; Dembele in the hole. Of the two central midfielders, Murphy is the more attack-minded one: he joined the attack very often and looked to find his front four with passes from behind the halfway line. Etuhu pressed and tackled. He rarely makes forward runs but he does have the engine power to do it a couple of times in a game. In the back, Riise on the left bombed forward a lot more than Baird on the right.

Bolton were in a 4-4-2 with Kevin Davies slightly behind Klasnic, almost in a 4-4-1-1 fashion. Formation-wise, the two teams have pretty similar shape (4-4-1-1, at times, could look like a 4-2-3-1) but there was more quality in Fulham's midfield. Muamba and Reo-Coker are both very defensive-minded while Fulham had attacking/creative ability in Murphy. However, it was Fulham's front four that did the job in this game. 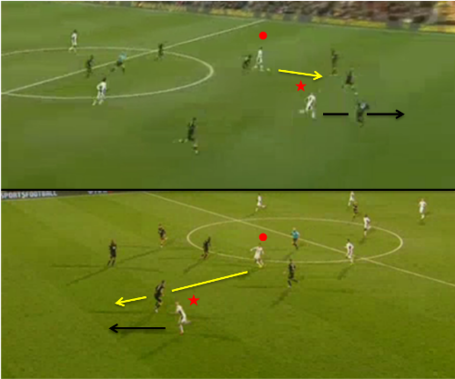 Andy Johnson is not a physical forward who controls long balls and brings his midfielders into the game. He likes to make smart runs in behind the opposition's defense. He is always looking for his midfielders to make a through ball that he could then chase. He doesn't mind moving out of his central position to open himself up for a pass. Above picture gives evidence of that. Dempsey (red dot) found Johnson (red star) with through balls.

That means two things for Chelsea. First, our central defenders must be aware of Johnson's every movement. Second, our midfielders must not allow the likes of Dempsey, Dembele and Ruiz much time on the ball: Bolton's pressing in midfield was poor and they got punished.

Fulham has a different option up front with Zamora who is a bit more physical than Johnson. But I think Zamora will take away the fluidity of Fulham's front four. 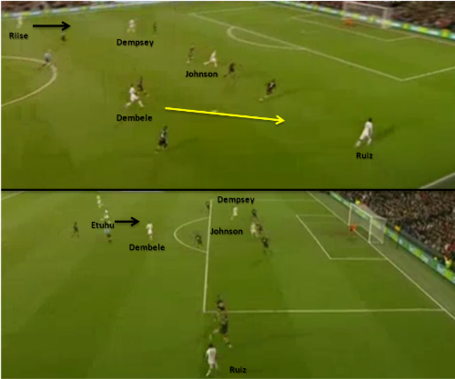 Above picture shows Fulham attacking build up to their first goal. Dembele distributes the ball to Ruiz on the right wing. Johnson moves centrally and Dempsey looks to come in on the back post. Note that Riise joins the attack on the left but as the cross comes in from Ruiz, he runs back to defense.

When Ruiz is on the wing ready to cross, there are two Fulham players in the box -- Johnson and Dempsey. Dembele chills out around the D and a central midfielder, this time Etuhu, joins the attack. As the cross comes in, Johnson moves toward the near post, creating space for Dempsey to get on the header.

The Bolton's mistake was that two of their center backs were occupied by Johnson and allowed Dempsey, a great header of the ball, to be marked by Boyata who does not have the physical strength to deal with Dempsey. The American, of course, got his head on the ball and scored. It is no wonder that Owen Coyle brought on Steinsson for Boyata at halftime to deal with Dempsey. Our fullbacks may initially mark Dempsey who is likely to play on the wings but his aerial ability is too good for a typical fullback to handle. When he is in the box, a center back should take care of him.

When defending, Fulham's two central midfielders -- Murphy and Etuhu -- set right in front of the back four. When defending attacks from the flank, as shown in the picture above, the wide man on that side drops back as the seventh man in the defense. Compared to Dempsey, Ruiz has more defensive discipline. The American sometimes fails to track back. Combined that with Riise's tendency to bomb forward, the left side of Fulham has a defensive weakness: a mouth-watering prospect for Daniel "I-Can't-Help-But-Score-Goals" Sturridge.

Secondly, as you can see from the picture, Dembele does not bother to drop back to defend. Bolton didn't make them pay because they lacked quality. But this could play into Chelsea's hand big time. All three of our midfielders can push on and dominate possession (and the game) from pretty far up the pitch.

Finally, with 20-feet tall Brede Hangeland at the center of their defense, Fulham dealt very well with all the long balls that Bolton threw at them -- even Kevin Davies couldn't get to his keeper's punts. As the game went on, Davies moved more and more toward the left where Senderos was to get a sniff at those long balls. Direct football with Drogba leading the line probably would not work against Fulham. This might be a game for Torres.

I didn't see the Manchester United game but I noticed one thing from looking at ESPN GameCast graphic of their first goal against Fulham -- patient build up. There were about at least 17 passes in the Manchester United's defensive area before Evra found Nani with a long pass on the left wing. Fergusen's men patiently looked for defensive holes, switching the ball from left to right and right to left. Of course, Senderos's terrible marking played a big role in that goal but Chelsea should take note of United's patient approach -- a series of horizontal passes followed by a surprise vertical ball.

That's all for this Scout Report.