Chelsea continued their habit of going behind against the top teams in England, and yet again managed to come away with at least a point. An open London derby to continue another trend in the Premier League of entertaining big matches; the scoreline may say differently but there could have been many goals in this one.

I am going to blatantly copy Graham's methods here; formation chart after the jump. 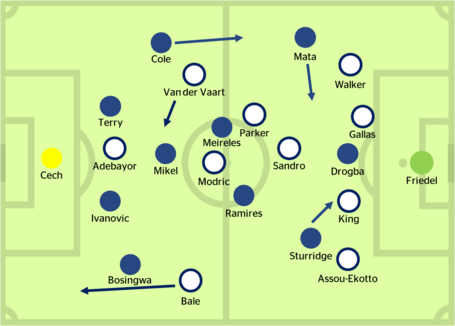 Andre Villas-Boas stuck with the usual 4-3-3, but John Obi Mikel came in for Oriol Romeu in the only real surprise selection. Presumably Boas sees Mikel as a better man-marker than the Spaniard, with Mikel seemingly notated to pick up Van der Vaart. Unfortunately, Redknapp bucked this plan by diverting from Spurs tradition to set them out in a likewise 4-3-3, however, as with any with any set of matching formations, it's not the shape that's as important as much the application and players playing that counts. Really, this was just a classic Redknapp lineup. Time to trot out the amateur tacticians favourite Redknapp line.

Spurs went for natural width with Gareth Bale on the left, width being something which has been pretty much non-existent at Chelsea since 2005. On the right they deployed a playmaker shunted out of position in Rafael Van der Vaart. For both teams the defensive lines were as expected, as were the midfield selections.

So we had, after a moments deliberation of working out what shape Spurs had settled on (with selection hinting that it could be any number of things from a 4-4-1-1 or 4-2-3-1), it became obvious they had set out with somewhat of a half-baked 4-3-3, which seemed to suggest that the game would boil down to some individual magic. However, Spurs started the game at a ferocious pace, pressing and harassing anyone touching the ball for Chelsea. It was hell raising stuff, and they were quickly rewarded with a goal. As said before, application counts as much as shape, and here was a good example - Spurs were pressing high, meaning that they were a lot more fluid and attacking compared to Chelsea, who were sitting back in a low block. Same shape, different story.

Unfortunately for the neutral fans who were enjoying the full throttle action that Spurs were providing, pressing high is pretty taxing in terms of fitness and the Spurs players ran out of puff pretty quickly and either voluntarily or involuntarily decided to drop back and only press when Chelsea entered their half around the fifteen minute mark. The momentum then turned ever so slightly, as aforementioned, the game became a series of individual battles in which Spurs and Chelsea were pretty evenly matched. The only real discrepancy was Bale vs Bosingwa, in which the Welshman was relishing tearing the right back to shreds.

As Chelsea climbed a bit more back into the game, we could see another lesson in tactics; of how individual players can make a big difference in terms of twin formation match ups. Here it was the movement of Van der Vaart as he came inside, as he often does when played away from his normal position in the center. This created to make a four man diamond in midfield for Spurs which all but took Juan Mata completely out of the game for the first half. The only time Mata had only influence was a shot when he had come all the way across into Ramires territory. Van der Vaart came so infield, he actually went behind Parker's #8 icon on the ESPN Gamecast average positioning graph at half time.

On a tangent, many fans question why Chelsea never came in for the talented Dutchman when he came on the cheap in the summer of 2010 to London. . This may be why. Tactical disclipine is a crucial attribute in any player's arsenal, more so especially at the top end of the club football spectrum. Redknapp may not care about tactics, hence why Van der Vaart was such a success in North London, but at any other club he may be driven to a bench spot due to his defensive negligence and poor positioning. Tactics isn't a big part of Van der Vaart's game, as evidenced by The Sun: There are no long and boring speeches about tactics, like I was used to at Real Madrid. It may make life more fun for Van der Vaart, but there's a reason why Madrid have actually won a trophy in the past year and Spurs haven't. It's a pity for Spurs fans that his attacking contribution can be easily negated by poor defence on his part; evidence of this came with Sturridge's goal and, thinking further back, Ramsey's goal in the Arsenal derby. 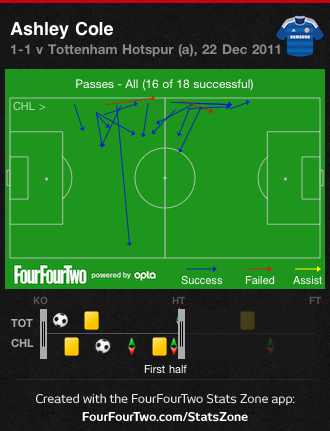 Staying on Van der Vaart, he was directly responsible for two pieces of tactical interest. Firstly, by vacating his wing, he left lots of space for Ashley Cole to push up into and herald a return of attacking impetus for the full back. Walker also ventured forward to give Spurs width on the right hand side. This meant they weren't totally inbalanced, but Ashley Cole is a much better player than Kyle Walker and it was no surprise Cole assisted Sturridge's goal.

Secondly, Van der Vaart's infield movement only congested the midfield zone further. As you can see on the formation charts it was an extremely congested area of the pitch, which lead to a poor first half for the Chelsea midfield, in particular Raul Meireles.

For Spurs, the substitution of Van der Vaart at half time did, at the time, make sense.

This was because injuries also had a large role to play in determining the result. While obviously Van der Vaart seems to have had a a slight niggle and was probably going to be forced off at some point, the injury to Branislav Ivanovic meant that Chelsea were forced to move Jose Bosingwa to the middle for his Chelsea debut at centre back. In this injury and defensive re-structure Redknapp saw plenty of potential for potent Spurs attack and promptly sent on Pavuylchenko, scorer of the winner vs Sunderland on the weekend, to try and do the same here.

[In the 2nd half] It was difficult. Luka played on the right, Pav came on and we went with two strikers. I thought ‘we're at home, let's have a go' but they then had control of the middle of the park because they had an extra man in there.

It is typical of Redknapp to acknowledge Chelsea's numerical advantage in midfield but not do anything to change the situation during the game. Oriol Romeu often found lots of time and space to work in and pass cleanly and strongly - he finished with a 97% completion rate. This game was reminiscent of the last time we played Spurs, the 2-1 win at Stamford Bridge. Mikel completed 73 out of 78 passes on that day largely due to Roman Pavyulchenko being not interested in closing him down at all. The same thing happened again here with the Russian; more signs of tactical indisclipine from Redknapp's players.

Romeu was only participating the game because of the injury to John Obi Mikel, but the enforced change may have been in Chelsea's favour, as he was the spare man in the 3 v 2 battle that emerged in the second half. As well documented, Mikel is a bit safer in his passing and Chelsea may not have kept as high a tempo as they did.

Cole was again crucial in Chelsea's renewed impetus in the final third. Mata played on the left flank more predominantly than he has in recent games, and in doing so he made clever runs inside of Kyle Walker which stopped the right back adding the width to Spurs' right hand side. Cole then pushed on, with only Modric in his way, who played even narrower than Van der Vaart. However in doing this Mata recieved less of the ball and was less of an influence than he has been in recent weeks. Had Chelsea not been forced into two early changes, introducing Malouda or Kalou to inject a forcible presence on the left and moving Mata into the middle may have made a difference.

A good game, in which Chelsea took the tactical initiative in the second half but couldn't capitalize where it counts - the goals tally.

In a sense, this game would almost be suitable as an introduction to tactics for a beginner. The pros and cons of pressing, the varying nature of like-for-like formations, the influence of substitutions, the importance of the midfield battle and the importance of space.

Football's become more and more a 14-man game. The strength of the replacements for Mikel and Ivanovic (who was playing because of injury) was contrasted against Redknapp's lack of inspiration from the bench. Spurs fans could not be blamed for taking aim at Redknapp for two points dropped; his one sub was ineffective and allowed Chelsea to take control.

Another exercise in learning to convert chances in order to win goals for Chelsea and Tottenham too; but the signs are promising of a successful campaign for both sides of London.

Also, thanks to Lampard8 for the title of the article!