Some would call it robbery, a late Jordi Gomez goal denying Chelsea a fourth consecutive victory on Saturday at the DW Stadium. However, robbery would imply that the visitors actually deserved to win. That, my friends, was hardly the case. 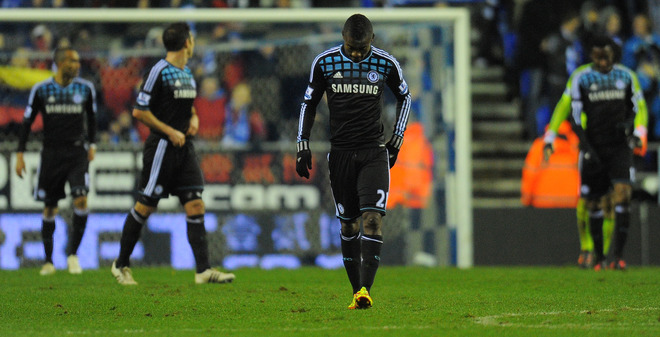 What is it with this team? Just when you think they are finally finding themselves, something like this comes about. Talk about chucking a wrench into our well-conceived holiday plans.

Now, in five days, to White Hart Lane. What to make of that pivotal fixture? It's all much more complicated now.

Enough of the alluding, let's touch on today's lethargy.

To start, Wigan opted to stifle rather than play. They pundits will tell you they were playing three at the back, but the reality was that it was more like a 5-4-1 or 5-5-0. It may have been clever and for the most part effective, but it wasn't going to do much to threaten our improving but still flawed defense. And that's how the first half played out. Wigan sat back and soaked up whatever came at them, though to be honest there wasn't much pressure to soak up.

Chelsea looked jagged and devoid of any ideas in the attacking third. I mentioned the idea of a frolic for us in the match preview, but this wasn't the kind of frolic I was referring to. Did we even carve out a shot on target during the opening 45 minutes? It really was rather pathetic. Raul Meireles and Frank Lampard were laboring in midfield - a trend that continued after the interval - and Didier Drogba was mailing this one in.

It wasn't so bad as I nodded off, but I kind of wish I had.

Something needed to change. Wigan weren't going to come out of their shell (yet), so the impetus was on us to improve the quality of this match. Andre Villas-Boas agreed, and introduced Salomon Kalou for Oriol Romeu to start the second half. It was an excellent call, much to the contrary of some opinion. Kalou gave us a much-needed attacker to dribble at the Wigan defense, a lock-picker if you will, in the place of a holding midfielder we really didn't need. Kalou's introduction also allowed us to move to a 4-2-3-1, with Juan Mata more central.

The change paid immediate dividends, with Kalou involved from the off (and winning a corner) and the general tempo to our play picking up drastically. Though chances were still coming at a premium - to be expected 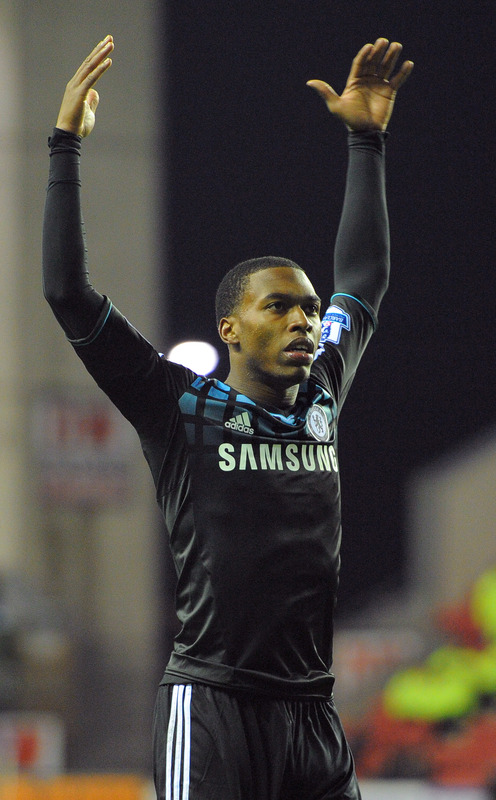 against so many players behind the ball - we were starting to take control of the proceedings. Kalou pulled back for Drogba on the left after a neat piece of play to get past Antolín Alcaraz, only for striker to find the side netting. A few minutes later, though, we had the breakthrough.

An excellent long diagonal ball from Ashley Cole found Daniel Sturridge on the right. Sturridge then did the rest, corralling the pass with one touch before slashing an effort past Ali Al Habsi at the back post. If this goal had been scored by a Messi or Ronaldo, the papers would be hampering on about it for days. It was that fucking good.

Villas-Boas wasted little time making his second substitution of the day, pulling Juan Mata in favor of John Obi Mikel. Most are enraged by this so-called negative change; nevertheless, it was the right tactical decision at the time, particularly with Wigan introducing a pair of strikers. I understand the viewpoint that reverting to a more defensive mode was destructive - that we should have sought a second goal before closing down - but AVB's stance makes sense. And, you know, Wigan weren't offering anything in attack to suggest we needed to go and find a second goal.

In fact, the only way I saw Wigan getting something out of this game was from some sort of individual mistake. Speaking of ...

Fucking individual lapses. Here I was thinking we had finally seen the last of this kind of absurdity, but no. First, there was Branislav Ivanovic attempting to get Petr Cech injured by playing a suicidal backpass toward the keeper. Fortunately, Cech was alert and managed to clear the ball not once but twice as Wigan pushed into the box. Bane also managed to somewhat make up for his error (not really) by heading away a shot that appeared to be on target as Cech was scrambling back toward his goal while favoring his leg.

Not long after that ridiculousness came the day's magnum opus of fuck-ups.

Jose Bosingwa, otherwise pretty damn good, lost track of his mark, Hugo Rodallega, down the left of the box. Franco di Santo, formerly of Chelsea, quickly picked out the out-of-form striker who then sent a rather tame effort toward goal. In a normal world, Cech would have fell on the ball with much ease but this wasn't a normal afternoon in Greater Manchester. No, Cech instead inexplicably decided to paw it back into play. This is the giving season, after all. Jordi Gomez unwrapped the gift with aplomb, depositing the ball into an open net and sending all of us promptly to the toilet to throw up.

Prior to the leveler, Villas-Boas had thrown on Florent Malouda for Daniel Sturridge in a substitution even I can't defend. All we can think is that it was a move made with Tottenham in mind. Nevertheless, it backfired. At 1-1, and with less than five minutes remaining, we were in a twisted situation. Drogba was giving us nothing, Kalou had drifted out of the match and Flo was Flo. Meanwhile, Lampard and Meireles were still combining to offer nothing in the middle of the park. Anyone want to question Ramires' influence on this side now?

Anyway. We closed out the match firmly on the back foot; hell, we were probably fortunate not to blow our point by the end.

Now for some random thoughts:
• Instead of harking on about how AVB got it all wrong, why don't we focus on the players that were actually on the pitch? That team - before and after the changes - should have been good enough to defeat Wigan. That's a simple fact. They just weren't up to the challenge today.
• Super Frank has done himself no favors. Lampard spent the week leading up to this match, in the wake of his game-clinching penalty against Manchester City, harking on about how he wants to play more. On this evidence, we can again see why he's been relegated to more of a peripheral role this season. Ponderous, indecisive and largely negative when on the ball, he offered us none of the surge we required offensively. This isn't an isolated performance, either, as you well know. Lampard has spoken of seeking a contract extension. That seems a far-fetched idea at this point.
• Bane is more error-prone than Bob. Get him back out wide.
• Fernando Torres didn't start. He didn't get off the bench. Cue the inflammatory debate.
• How about a positive spin on things? A month ago, the club was apparently in crisis. We were going out of the Champions League if you believed everyone else. Now, a few weeks later, we're in the knockout stages of that competition and have collected seven points out of nine in the league. Two of those games were considered crunch fixtures, too [Newcastle (a), Manchester City (h)]. That's not exactly a bad haul, is it? Sure, dropping points to a relegation-threatened team sucks, but it's not the end of the world, particularly considering what we've already been through this season. Remember, we lost at Wigan in the season King Carlo led us to the Double.

On to the Lane. Carefree, bitches.