Jordi Gomez equalised late on for Wigan in a generally dismal match. Roberto Martinez went with a back five, with Connor Sammon being played ahead of Victor Moses up front. Andre Villas-Boas made one enforced change from the side that ended City's unbeaten run on Monday, Frank Lampard returning to the side in place of the injured Ramires.

Wigan were much better defensively than they had been all season. This came from an unusually fluid but fundamentally defensive formation that saw them sit deep in their own half for most of the game, and Chelsea's midfield and attack struggled to pass through this ten man barrier.

Wigan's defensive shape was unusually flexible, with David Jones willing to double-mark Daniel Sturridge, Diame would look to press the player in possession regardless of positioning, and Caldwell sweeping in behind his defence to deal with long balls.

The game lacked creativity in the final third. After a run of good form, this was a disappointing performance from Chelsea. Wigan were also dour in possession and it took a defensive error to level the scores.

Roberto Martinez spoke in the post-match press conference of his team's desire to block Chelsea through the middle and attack via the wings. 'Chelsea are very strong through the middle and out wide we have outstanding players in one-on-one situations, so that's what we tried to do.' In this regard, they were successful, with Lampard and Meireles having poor games, and the majority of the Wigan attacks coming through the flanks.

Without the ball, the players would defend deep as a unit, and the midfield trio of McCarthy, Diame and Jones looked to choke out Chelsea's supply. While Wigan often doubled up on the threat of Daniel Sturridge on the right hand side, Juan Mata and Ashley Cole were often given freedom to attack down the left, due to Mohamed Diamé often leaving his position on the right of Wigan's midfield trio to attack the player in possession. As a result, Ronnie Stam often found himself isolated, however the movement of Juan Mata inside and a reluctance from Ashley Cole to attack on the overlap (a trend concurrent with Chelsea's recent improvement in defence) meant Chelsea didn't take full advantage of this situation.

Wigan were also set up well to deal with Chelsea's second option in attack - long balls. Gary Caldwell played like a sweeper in behind his defence whenever Chelsea went for the aerial presence of Didier Drogba. The average positioning chart at half time evidences this, and we can also see the average positioning of David Jones (no.14) very wide on Daniel Sturridge's wing, despite nominally being a central midfielder. 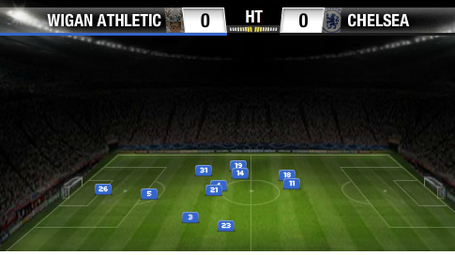 Villas-Boas moved at the half time interval to bring greater attacking impetus into Chelsea's play, with the removal of Oriol Romeu for Salomon Kalou. 'We introduced another winger and allowed Mata to play in between the lines." With Wigan's attacking threat non-existant, a true holder was probably unnecessary, and as such the double pivot that was utilized was enough to negate any threat. Kalou played out wide on the left flank, and he immediately stretched the play and created some good opportunities - most notably when Didier Drogba shot into the side netting. Kalou's introduction also freed up Juan Mata into the middle, where he is arguably at his best. However Mata was having a poor game, and was ineffectual in the hole more as a consequence of performance rather than any tactical adjustment from Wigan.

While Kalou wasn't directly involved in the goal, his introduction allowed Chelsea to threaten much more and forced Wigan deeper. It took a moment of magic from Daniel Sturridge - although Ashley Cole's cross was very good too - but it was the overall shift in the tempo of the game that led to the goal.

The next move was to remove Juan Mata for Jon Obi Mikel, and despite the substitution seeming to hint an inversion of the midfield triangle to place Mikel at the apex, the double pivot was maintained and Lampard was played behind Didier Drogba. In maintaining the 4-2-3-1, Villas-Boas exposed his side to a failing of the formation - the space between the full backs and the attackers. Wigan began to enjoy this space in the width of the park. This, combined with strong Wigan pressing (as is their natural game), meant the momentum fell away from the team in the lead. Villas-Boas looked to address this with his final change, Florent Malouda for Daniel Sturridge, as the Frenchman is more inclined to track back. 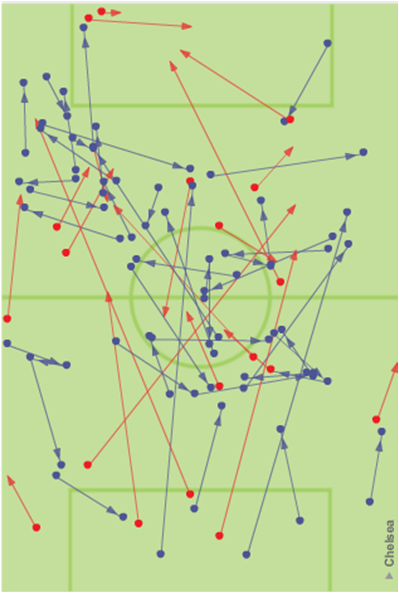 However, while the winger's defensive contribution may be more notable, his decisions in possession were alarming, as were Meireles'. After Gael Clichy was dismissed at Stamford Bridge on Monday, Chelsea were very patient and moved the ball well across the pitch, looking to exploit the numerical advantage. Here was a slightly different scenario, but the same applicable ideas. When in the lead against opposition you are technically, physically and mentally better than, it makes sense when in attack to keep the ball as a priority above all else, especially when you have the capabilities to do so. As Pep Guardiola says, the opposition cannot score without the ball. Too often in the final ten minutes did Chelsea simply give the ball away, as evidenced by the number of long balls and red lines on the chalkboard to the right.

While again we can not provide direct evidence that this was the cause of the goal, it is directly responsible. Wigan were revelling in the support of the crowd and their own determination to win. Chelsea's deep defensive block meant that any mistake would be punished.

After three good results, Wigan brought Chelsea back down to earth. A disappointing result highlights the improvement needed from the side, particularly in creating opportunities when Juan Mata is not playing well. It was unusual that Villas-Boas stationed Sturridge and Mata deeper midway through the first half given their goal threat. Some rotation of the squad may have been needed here - Lampard and Meireles both performed similar roles, and Oriol Romeu was an unnecessary bit-part in the first half. Had he been more flexible, perhaps by opening up the wing backs by dropping in to create the 'Barcelona back three', the game may have opened up earlier. Villas-Boas is young, and he is still learning. Games like this will only help him improve. Credit to Wigan - they defended well, and took their chance.