Are Chelsea In Danger Of Falling Out Of The Top 4?

Share All sharing options for: Are Chelsea In Danger Of Falling Out Of The Top 4?

Chelsea have not had their best start to the season. After a reasonably comfortable first few games, we lost 3-1 at Old Trafford and went into something of a tailspin, suffering a referee-aided defeat at Loftus Road before losing back to back Premier League matches at Stamford Bridge to Arsenal and Liverpool, precipitating 'Chelsea in crisis' cries and causing quite reasonable people to worry if the Blues were going to drop out of the top four this season.

Three wins on the bounce - including one against league leaders Manchester City - have made everyone feel a little better about the situation, but there's no doubt that we've subject to one of our worst starts to a season in a while. So, I decided to take a look at the past eight seasons and see where teams with a certain number of points (actually, points per game) on December 13th ended up. Graph coming up after the jump... 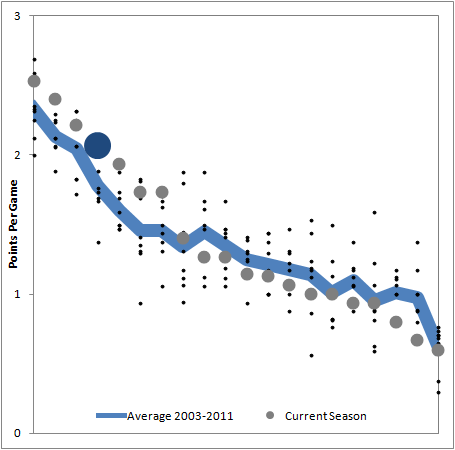 Obviously, we don't know for sure how things will end up this year, but we can use historical data in a number of ways. Let's take a look at Chelsea's chances this year first. So far this year, the Blues have taken 31 points in 15 games, good for 2.07 points per match. Despite the rough patch, they're currently in third place in the table, although Tottenham Hotspur are level on points and have a game in hand.

The mark of 2.07 ppg is well below where the ultimate winners and runners-up were at this point in the majority of the seasons we've looked at, but it's marginally higher than the average third-placed team and comfortably better than the average 4th place side, who were normally at 1.78 points per match in mid-December. To translate that to Chelsea this year, we'd have to have turned one of our wins into a loss and another into a draw before we drop below that threshold.

No team holding a ppg over 2 at this point in the season has dropped out of the Champions League places since this data set began. Only twice has a team finished lower than third place. Obviously, this year will mark the third time that's happened, because there are four teams with ppgs over 2, but based on what we have in front of us, Chelsea should be feeling pretty comfortable about their ability to finish in the top for (as should Tottenham).

Statistics are, of course, guides rather than accurate predictors of the future, so don't go betting tonnes of money on us making the top four this year or anything just because you read this, but I'd be fairly confident that we'll be alright. I was expecting a third placed finish when we started the season, and that still sounds about right to me now.