It was a fantastic result against Manchester City, somewhat unexpected, especially for those of us who watched the game holding half empty beer mugs (coffee/tea cups). This is a significant victory and we should celebrate it as such but we must not forget that we looked shaky at the start of the game and that we conceded an early goal. So, I am here to bring down the celebratory mood, just like your grumpy grandfather at the family Christmas dinner, by offering a close look at how we conceded the goal.

Space between the Lines 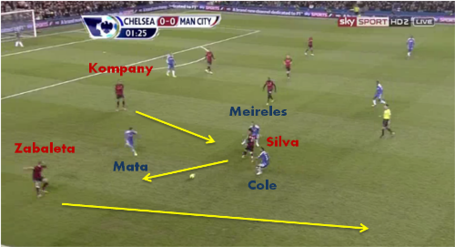 Man City's attacking move started when Kompany finds Silva who has come very deep, dragging Cole along with him, to get the touch of the ball spreading it to Zabaleta on the right. The City fullback, then, makes a one-touch pass forward to Aguero.

I don't know what Villas-Boas's instructions are for Cole in this game. He seems to have been man-marking Silva, thus he was dragged deep into City's half by Silva. This leaves a huge space behind Cole and Zabaleta exploited with a quick pass. This is what it looks like from a wide angle. 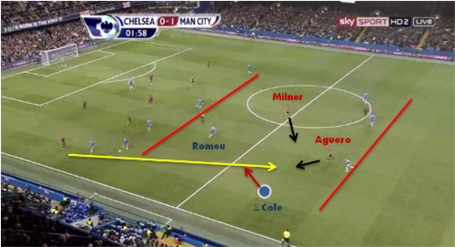 There is plenty of space between the Chelsea midfield line and the defense line, and we have two City players floating in between these lines -- Milner, who is making a diagonal run, and Aguero, who is dropping deep to collect the pass. Romeu was also pretty high up the pitch, far away from the defensive action.

And here is why I question Cole tracking Silva all the way up the field. If he would have stayed put in our own half instead of following Silva, he might have been in a position to cut off the pass to Aguero. But. of course, this is just hypothetical; in real life, both Silva and Zabaleta might have reacted differently if Cole didn't follow Silva.

This, however, is all happening around the halfway line. A lot has to happen before City gets a sniff of Chelsea goal. All is not lost. Right?

Holes in the Cover 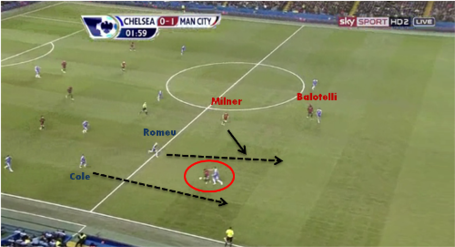 As Aguero takes the first touch of the ball, Terry is very tight on the Argentine. Balotelli is stationary next to Ivanovic but Milner continues his diagonal run.

At this point, Chelsea could still have a good defensive shape if Romeu runs straight back to where Terry was before and Cole dashes back to his original left back position. This will allow (1) Romeu to cover Terry or cut off any potential passes to Balotelli (like the one that actually happened) and (2) Cole to mark Milner who is running to the left side of Chelsea. But that's not what happened. 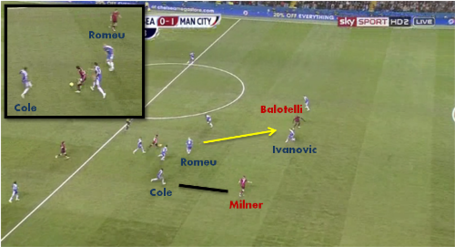 Romeu drops behind Terry but not deep enough. Cole, instead of running straight back to defensive position, attempts to tackle Aguero. This means that, by the time Aguero has turned to pass, Romeu could not intercept the pass and Cole was in no position to cover Milner who was totally unmarked on the left flank.

Of course, Terry has a big role to play in this goal. If you are a defender marking a forward tight, you should never allow them to turn. Terry failed to prevent that. But he also had very crappy support from his teammates, including Ivanovic who was caught in between two minds... 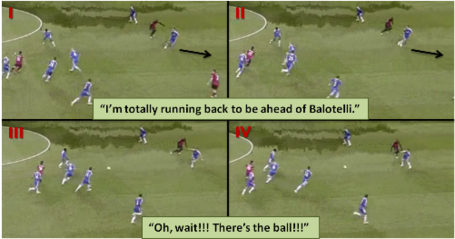 Ivanovic was going to run back to stay ahead of Balotelli but the ball distracted him. Instead of running back, he made a poor attempt to intercept which slowed him down and made it easy for Balotelli.

All in all, it was not a great goal to concede (he writes as if there are good goals to concede). It shows that we still struggles when we press high, mainly because all the tiny little mistakes that different players made along the way are intensified. Blame whoever you want for this goal but no one single player holds the sole responsibility. That is for sure.