Share All sharing options for: The Curious Case of Salomon Armand Magloire Kalou

I swear that's his full name. 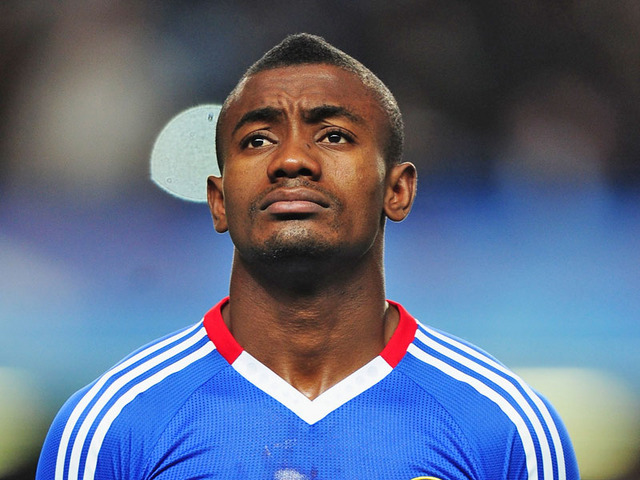 To preface, I love Kalou. Yes, 'tis true. I've been rooting for his individual success moreso than most players in our squad. Particularly, it seems, because he just gives off the vibe of being a generally nice dude. You'll never hear complaints about dressing room unrest due to his comments or attitude. If anything, players go out of their way during the season to mention, in passing, that Sala Kala is generally speaking one of the funnier blokes behind the scenes. All things equal, you'd expect a player with a strong reputation and a penchant for working hard would eventually find the pitch. But alas, that's simply not the case at the moment.

Sala's had four games this year, two starts and two sub appearances. That's a paltry number for someone who has improved his goal tally each season since becoming a member of the club.

I know the rub on Kalou. He's too selfish. He makes poor decisions. He doesn't have a left foot. His passing is woeful. He's all flash and no substance. Yeah I'm well aware of the criticisms. I'd ask though, are any of these points applicable to other members of our squad, or is a certain Fernando Torres immune to such comments? I'm not throwing the baby out with the bathwater here- I'm not marginalizing one to boost another. Just saying, if you're going to question Kalou, then you might as well do it on merit. And since he's had four matches this season, we can use those as a platform for evaluation and go from there.

He started our second match of the season against West Brom, and was promptly subbed off after 34 minutes to make room for a tactical adjustment that ultimately led to our inevitable win. He started in the Carling Cup against Fulham, and converted the winning penalty to see us through to the next round. He came on in the 83rd minute at the Mestalla and contributed to the own-goal that cost us three points in the CL. He nabbed a goal against Genk during our rout back in October (you'll recall that as the match when Fernando looked like he was ready to come alive).

That's it. Four fucking matches. Look, I know we're spoilt for choice up top with the wealth of options at our disposal- but clearly it's not really working at the moment. Might be wise to mix it up here and try using Kalou on the left wing allowing Mata to slide further back into a more central midfield role. I can picture an attack with INSERT STRIKER HERE working in tandem with a wing combination of Danny and Sala. Both would prefer to work on their inside foot, allowing space for the fullbacks to come forward and offer cover and support in attack. Makes literal sense on paper, but we've yet to see it in action.

I'm not jumping on the hate AVB bandwagon here, just pining to find a few minutes for Sala. Our Carling Cup tie with Pool was a great opportunity for him, as well as Nelks, to get a run out. But alas, AVB opted to shuffle the deck and the formation rendering both fringe players. With rumblings that Kalou has been offered a new deal, I have to wonder what the realistic probability is that he re-signs. I'm sure he'd want to stay at Chelsea, but if minutes are going to be this hard to come by for an Ivory Coast International, a starter at that, he might be looking at his options. Remember, he's entering the final year of his deal and can sign a pre-contract with other clubs from January onward. There are 30 days remaining for Chelsea to decide how serious they are in wanting to keep Kalou, but more than dollars have to be offered. An act of good faith, i.e. finding minutes for him in matches would be wise.

He may not be the answer, but he might offer a glimmer of hope, or at the very least a new dimension in attack that we've recently lacked. I'm fascinated by what AVB might do on Saturday, as I'm sure all of you are. Stay tuned for more on this saga.