Catching up on all the tidbits you might have missed during the week that was. More, after the jump: 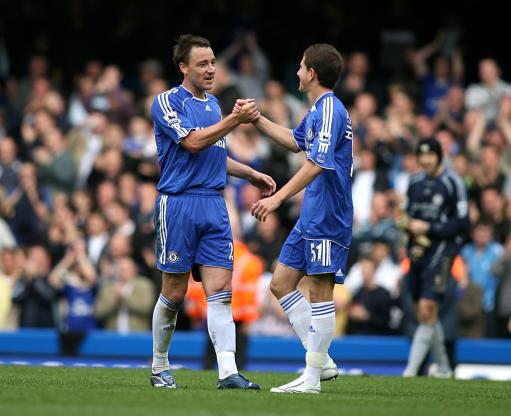 First, Jack wrote a brilliant piece on the return of one Sam Hutchinson this morning which deserves recognition. So, before going any further, read here. I can join the chorus of blue faithful that agree this is without a doubt the best news to emanate from SW6 in some months. Amidst the scandals, uncertainty, poor performances, and general malaise that has rendered our once mighty club inept on the pitch, it's with a huge sigh of relief that we welcome Sam back into the fold. I'd be delighted if he can keep this up and manages to create a respectable professional career. Goes to show, with the right attitude, patience, and a diligent work ethic, anything is possible. Really, inspiring stuff.

Now then, on to the rest. There's been a bit of news regarding some of our youth prospects, two in particular, that needs to be noted. First, Carl Magnay took to Twitter yesterday to inform his followers that he has been given the go-ahead by the club to move in January: 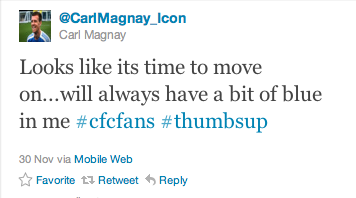 Seems the prospect of toiling in the reserves was too much for Carl, and he's rightfully decide to pack his bags and move for greener pastures. I never really rated the kid that highly, but nevertheless, I commend him for his attitude and professionalism. Hopefully he lands in a situation that gives him the chance to ply his trade week-in and week-out. Perhaps a Championship side is willing to take a gamble on him, I'm sure a few in the lower rungs could benefit from his services.

Elsewhere, Jeffrey Bruma has hit the headlines after an interview with German outlet Bild, in which he discusses the possibility of extending his stay at Hamburg. View the below imagine extracted from a reliable Twitter account for the scoop: 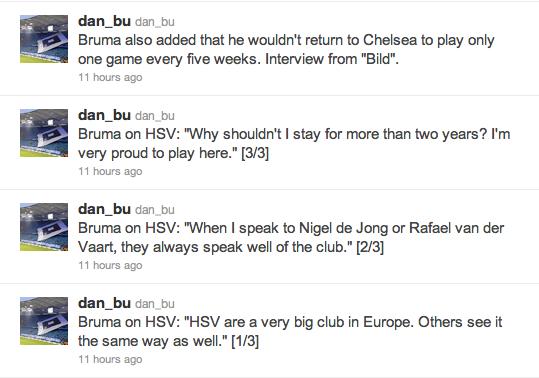 Now, before everyone goes nuts and starts shouting from rooftops for Bruma to fuck off, lets pause and realize the root of what he's saying. He's 20, on the fringes of the Dutch National Team, and in need of regular and consistent playing time to evolve. If a return to Chelsea, as he implies, means he'll be rendered fourth-choice behind JT, Luiz, Ivanovic, and Alex, then there's no reason for him to come back next season. However, if suppose the club decides to offload Alex in January, then the realism of Bruma returning for next year increases exponentially- provided we don't add another center half in the transfer window.

I've always highly rated Bruma and, fair play to him, he's been one of Hamburg's best players this year. Among the litany of players poached from our academy, Bruma has been the stand-out of the lot. It would be a poor choice on the club's part to let him leave at this stage in his career, and I have no reason to assume that will transpire. But, there's a latent sense of spite in the tone Bruma uses in his interview. It's not disdain, regret, or anger persey. It's just an acknowledgement that he'll have a hard time cracking the rotation as it stands at The Bridge. He knows he has to do what's best for his career right now, not what might be best in four years. So, I think we can all agree that he'll be sticking around at Hamburg for another season after this. Don't believe me? Check out the below image:

Again, it's not all doom and gloom. But, it's clear that Jeffrey is going to be extending his stint in Ze German Hinterlands for the time being- unless something drastic happens on our end and we decide to throw him in the mix on a regular basis.

Finally, a bit of non-Chelsea related news. Everyone was disappointed to hear the news that Liverpool's Lucas has been ruled out for the remainder of the season after suffering extensive ACL damage during Tuesday's Carling Cup tie. Putting our differences aside for a moment, I would just like to offer the CO's sympathies for the loss of a player that's improved by leaps and bounds over the last five years and has become an integral member of Kenny Dalglish's set-up at Anfield. It's never enjoyable to watch a player go down under the weight of a crippling injury, and lord knows we are intimately acquainted with ACL calamities over the years (Bison, I'm looking at you). So, for what it's worth, we send our condolences for the loss of Lucas, and hope he rehabilitates smoothly and has a swift recovery. On the heels of the Sam Hutchinson news, I feel we should all temper our expectations and realize how quickly it can all turn upside down, as was the case for Mr. Lucas. Chin up though, he'll be back by the summer.

Besides, don't 'pool have the GREATEST MIDFIELDER ALIVE? No, not Charlie Adam- that English guy. Can't remember his name though, haven't seen him in ages .... (a bit of snark got out there, my bad).