This world is riddled with boring cliches pertaining to the human spirit. Phrases such as don't give up and never back down. Ridiculous drivel seemingly custom-made for the cinemas.

The path of Sam Hutchinson is ready for the big screen as well - only thing is it's a true story. 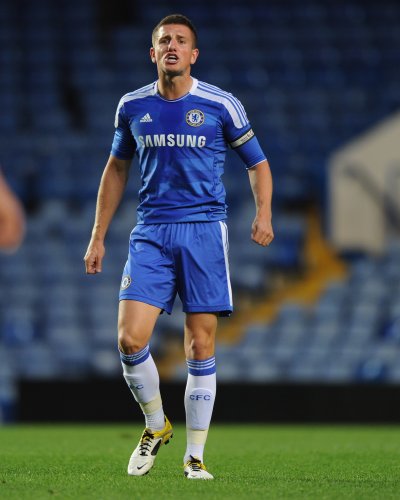 Hutchinson, amazingly, signed a new one and a half year contract with Chelsea on Thursday. The deal comes on the back of Hutch making seven successful reserve team appearances thus far this season.

Did I mention this is unbelievable news? For those unfamiliar, let me tell you why.

Life is selfish and unforgiving. Sixteen months ago, Hutchinson, once seen by Jose Mourinho as the natural replacement for England's Brave John Terry, was forced to walk way from the game because of persistent injuries to both knees. He had made four first-team appearances prior to the decision. How could you forget his assist for Super Frank in our 7-0 mauling of Stoke City in April 2010.

To say Hutch's long walk into the shadows was a sickening time for both the club and its supporters would be a gross understatement. Retiring from sport at age 21? A tragedy, enough to bring a tear to anyone's eye.

All was not lost, though. The club remained firmly behind Hutchinson, offering him a mentoring role within the academy while also assisting with his university studies and helping him pursue the required coaching badges. It was during this time, away from the physical (and mental) stress of the game, that Hutch began to seen an improvement in his overall condition.

His knees weren't bothering him as much as they were known to. The pain was subsiding. So he thought he might see if he could convince Academy director Neil Bath to allow him to get a game in. Bath reluctantly agreed, and the rest as they say is history - inspiring, feel-good history.

Hutch said this after agreeing to the new deal:

It is great news I have signed a contract. It is great to be back and I am looking forward to the future. I take it week by week and it is a slow process. I am still not out of rehabilitation but I am playing 90-minute games and feeling really fit.

Sam signed a one-and-a-half year contract and should he make progress, we anticipate there could be a further contract but he is still going through the very end stages of rehab and he is still not training with first-team-type loading in terms of intensity and demands.

The plan is that Sam will gradually build up training intensity going into January. He was coaching a little and realised that the pain wasn't there anymore and although it is fantastic news because we have a player who has been with us since he was seven who we thought had retired, it is a case of every six weeks, let's visit where we are at. It is looking good that he will have a professional living in the game but we have to stay patient with the plan.

You can probably tell by my phrasing throughout the blog that I'm just a tad excited about this unexpected development. Why wouldn't I be?

It's an amazing, inspirational story.  Sam's a truly great kid who refused to feel sorry for himself. He remained optimistic despite a mountain of hard luck, and, through a blue-collar ideal, worked his way back from the abyss. How can you not be genuinely happy for the 22-year-old? No matter what happens, professional appearances or no, Hutch has proven that anyone can overcome adversity. And, you now, we didn't need the movies to tell us that.

From retirement to redemption. A round of applause for Sam Hutchinson.