Blackburn 0 Chelsea 1: Right Back on Track

Share All sharing options for: Blackburn 0 Chelsea 1: Right Back on Track

Three points and a clean sheet – Chelsea filled the briefing, but they did it the hard way Blackburn came close to scoring on several occasions, but it was a solitary Lampard header that made the difference.

Let's take a look at three key issues from the game after the jump - the right hand side, the Daniel Sturridge condundrum and the defensive structure.

Villas-Boas surprised many by selecting Sturridge as the central striker, giving him a chance to stake his claim down the middle for the first time this year. Florent Malouda played on the right and Branislav Ivanovic moved to the right in place of Jose Bosingwa, whilst Alex moved into the centre of defence.

As for Blackburn, they were in a pretty uninteresting 4-4-2, with Mauro Formica and Yakubu taking turns to drop deep to cover for the numerical difference. They didn’t do this well, hence a good Mikel performance, including a stellar ball for the goal.

The 4-3-3 was again at work for this game, but this time Malouda took a position on the right hand side, playing very narrow and drifting back to his natural position quite often throughout the game. While Mata does exactly the same from the left hand side, he has the attacking dynacism of Ashley Cole to fill the void of width. Evidence of this is in the lopsided average positioning of Chelsea’s players from WhoScored on the right.

Malouda had Ivanovic behind him – good defensively, but underrated for his attack. Indeed, Ivanovic played more crosses in open play than Ashley Cole last year, and was selected in the PFA Team of the Year in the Double winning season, as a right back. He was clearly doing something right.

However he doesn’t offer an attacking threat when against a better one from the opposition. This was notable in the game against Spurs (of which this game has connotations in terms of selection) and against Manchester United. Facing Gareth Bale and Nani respectively, he’s subdued his forward foraging in return for securing his side defensively.

Junior Hoilett was the man in question here, the Canadian Blackburn’s main attacking threat (apart from Samba, of course) pushing Ivanovic deep in his own half. With Malouda drifting into the middle on a regular basis, it left Chelsea’s right hand side looking quite empty. We’ve seen that before – pretty much the whole of Ancelotti’s reign when Anelka decided he was either a centre midfielder or a central forward. 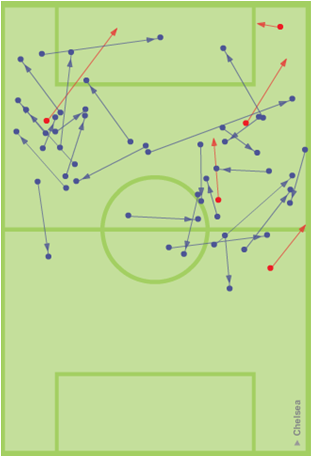 Take a look at Malouda’s passing chalkboard on the left– not bad generally, but positionally all over the place

At half time Chelsea had only used their right hand side as an attacking option a stingy 12% - compared to 38% on the left. This inadequacy had to be addressed.

It was, immediately after the break, with the arrival of Fernando Torres. This wasn’t necessarily introducing a marquee in the hope he’ll get the goal – while that was certainly part of the reason, his introduction moved Sturridge into the right wing position – and the team improved drastically down the right hand side.

Furthermore, it appeared Villas-Boas told Ivanovic to be more brave in his attacking movement. This was evident when he was ludicrously high up the pitch, to the point Alex got angry at him and told him to get back.

Moving Ivanovic forward made a big difference however – most obviously with the fantastic cross for the goal. Ivanovic then dropped back to cover for Hoilett on the counter attack. This solid performance leads to a compelling argument against Bosingwa when it comes to selecting a first choice right back.

'We thought we could make the most of Sturridge's speed in behind their defence,' he explained, 'but we couldn't release him in the first half apart from one moment when he escaped [Christopher] Samba and they collided in the box. 'In the second half we decided to put him in the channels and both of them played very well.'

That’s Villas-Boas talking about his decision to start Daniel Sturridge as the central striker, contrary to his claims all year that Sturridge would only ever be considered on the right. While it’s a good idea in theory, and with Torres having played twice in the past six days (and not in spectacular form), did it work?

Yes and no. While his link up play was good, misplacing only five passes the whole game (that’s his chalkboard on the left) he didn’t get played into the channels as much as AvB would have liked. The refined approach in the second half was more appropriate. Sturridge works best when he plays with a decoy in front of him. His talent is running onto or with a ball – not so much the link up play required as a lone striker. His time at Bolton came playing like a second striker, with someone to hold up the defence in front of him (mainly Kevin Davies) while he worked his magic. On the right he is particularly keen on cutting inside to his preferred left – as a central striker he was often collecting the ball in positions that didn’t suit his movement.

Malouda’s a winger, who was also playing out of position – he likes to work in behind the striker, not ahead of them. Had someone more forward-thinking been playing on the right, say Nicolas Anelka or Salomon Kalou, Sturridge may have played better as a central striker, with an attacker to disguise his movement.

The best illustration I can give of what I’m trying to suggest here is by referring back to the Sunderland game we won 2-1 at the Stadium of Light, to Graham’s superb analysis. Anelka played centrally that day, with Mata and Sturridge on the wings. As the picture on the right illustrates, this changed the focus of Chelsea’s attack.

A similar concept is applicable for Sturridge in general. With no one in front of him to act as a red herring, he was forced to drop deep and look for balls in behind the defence for Chelsea runners. With Malouda and Mata on the wings, that wasn’t likely to happen. As statistical evidence, he only passed one ball in the attacking third while playing centrally – forced to often to drop deep as a way of executing his skill set.

One point I’d like to bring up quickly is a build-on from my discussion on our defensive system last game. Today Mikel played holding midfield, and did so pretty well. But did he fulfil the criteria set out in the post, that he is to drop in and the centre back to press?

As you can see, the ball has come from the right hand side, and Alex has moved across to help Ivanovic, and Mikel drops into a centre back role. Good stuff. 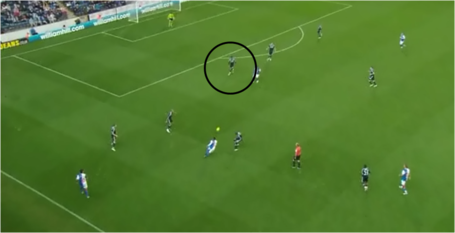 You can see how not executing this set up can very easily lead to a good chance for the opposition – this is the build up to the Yakubu chance in which Cech breaks his nose. Notice Mikel’s positioning – near the touchline!

Hard pressing is all well good, but you’ve got to do it sensibly. Two defenders doing it at the same time, dragging a perfectly good shape out of place is not doing it sensibly.

A strange game. The key message here is that players suited to a system will most likely always perform better. Not conceding is a bonus but three points is and always will be the main objective –completing that brief is enough heading into the international break.