Share All sharing options for: Chelsea 0 Liverpool 2: A Diamond, But Little Shine

A well drilled and organised Liverpool side are deserving entrants into the Carling Cup semi finals, thanks to an insipid peformance from a combination of stalwarts, stagnates and striplings - although a few exceptions to the rule mean it's not all doom and gloom. There are some serious problems though, and this analysis will probably go only halfway to being anywhere near enough to assess the damage caused by a 2nd defeat to the Scousers.

Both sides made significant changes to their teams from the weekend, with Liverpool needing to find a team capable of filling out another ninety minutes in the space of forty-eight hours, while Chelsea had a longer break having played a day earlier, but still made nine changes. Formation and tactical lineups after the jump. 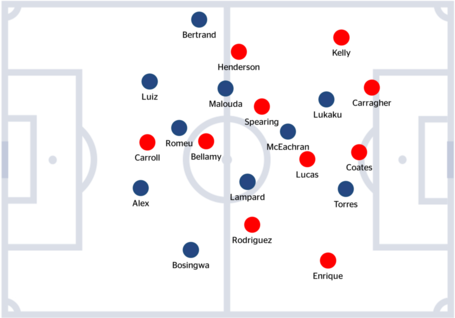 As you can see, Andre Villas-Boas went outside the square and tilted Chelsea's formation on it's axis to create a diamond midfield with Lukaku and Torres at the top. Malouda and Lampard flanked Romeu and McEachran, and Bertrand was the only unusual selection in the back four. Turnbull got a rare start.

Liverpool went with a vaguely strong team, although it's arguable only two of those players are first team - Lucas and Enrique. Bellamy, after a strong performance, might call himself a first teamer from now on too. They had some youngsters in their lineup too, with Spearing, Kelly and Coates coming in for a rare chance in the first team.

It seemed Liverpool's tactics were aimed similarly at what they tried to do at Stamford Bridge nine days ago, with Rodriguez in particular attempting to push up on the wide left. To an extent, it worked. This was pretty debatable though considering that Chelsea's formational change changed the rules of this tactical game.

Chelsea went with the diamond that was widely promised under Ancelotti but never really materialised with the Italian, and this game was another example of it's inherent flaws, particularly evident in the Premier League.

First of all, the diamond tends itself to causing a great burden on the central playmaker. McEachran's injury changed this issue, however his positioning in his time on the pitch saw him, as you can see above, sandwiched between Spearing and Lucas. To avoid the snapping midfield terriers, he dropped deeper to get on the ball, allowing 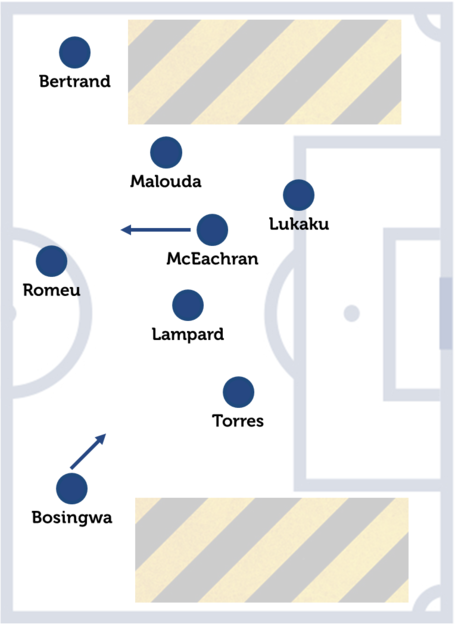 Malouda and Lampard to advance in front of him. This fluidity worked well to create combinations in the middle.

However nice the play was in the middle, it's fairly easy to eventually slow down and stop any sort of run of play through there, and that's where the burden on the fullbacks and lack of wide players becomes apparent. So similarly to parts of last season and the early part of 2010/11, there was a real lack of an outlet on the wings. This leads to predictable play that becomes quite easy to stop.

In this regard, Bosingwa and Bertrand had important roles to play. However Bertrand was making just his third appearance for the Chelsea third team, and only his second start. It seems unfair to ask him to cover the vast amount of distance required by a wingback in a diamond, particularly when Bosingwa was doing a pretty bad job of it on the other wing. This increased the impetus for Bertrand, and he replied with aplomb, making a good fist of his responsibilites by propping up to assist the attack. Malouda also assisted in this by drifting out there on occassion. However this left us vulnerable on the counter down the left hand side, particularly evident for goal number one.

On a side note, there are no statistics like the Guardian Chalkboards or ESPN Gamecast, which makes proving any claim I make pretty hard.

It's so disappointing in this respect that Bertrand was the better full back when you have an international playing on the other side. Bosingwa has pretty hapless in his positioning, often coming inside and just congesting the midfield zone more. When he did stretch the play down the hazard line flank, we looked much better.

Another issue with the diamond, not all of them but particularly ours, was the ridiculous amount of left sided players in it. Lampard normally plays on the left central midfield, Malouda is nominally a left winger and McEachran used to play out on the wing. It seems a bit farcial to cram them all into the one midfield particularly when it's not like Malouda or Lampard never get game time. Leaving one of them out would have made much more sense.

Really, this is just one of the bizarre selection issues. My main problem is with Lukaku and Torres up front. We spend all season playing with a 4-3-3 or some variation mainly involving an inverting of the midfield triangle, and then suddenly we need to cram Lukaku and Torres into the same team? Picking one of them would have made much more formational sense. If it was about giving Torres game time, then why not introduce him as a late sub?

Back to the analysis. Liverpool dealt with the two up top pretty well, with Jamie Carragher playing well by dropping off behind the rest of his back four and then pushing hard whenever a ball came towards Torres. This was a unique tactic, but given the lack of touch Torres has demonstrated lately, it made sense to pressure him into thinking he could run with the ball, but would then face Carragher in behind him immediately. In retrospect, it was very good play, the mark of experience playing the game and playing with Torres.

The selection of Torres and Lukaku was just an unbalanced partnership, an issue that is at the crux of this analysis. Villas-Boas seemed torn between selecting youngsters and balancing them out with experience. Really, it was unnecessary to switch from the 4-3-3, and the diamond is clearly not a feasible long term solution.

It's easy to fall into the trap of labelling the second goal a fault of the high line - but that's harsh. It's certainly a factor, but not's the contributing factor. It's a whole combination of small, silly little things that just continually let us down. Let's take a look:

The stark differences between this lineup, which contained players stuck in the old ways of Chelsea, compared to the Wolves lineup which contained many more of the players that fit Villas-Boas ideology, show in the individual errors we as a team contribute. This is just one in isolation that happened to lead to a goal; too often we get caught out because players just don't maintain the standard needed for the whole game. Getting results playing beautiful football is commonly seen as the 'pinnacle of football', and that's why Barcelona get so many plaudits. Villas-Boas is trying to introduce a similar setup, but these teething problems that have continued for far too long suggest that either an alteration to our system is needed until the squad is rebuilt the way he wants it, or the players who do fit the philosophy become our regular starters.

This has been a pretty disorganised report. I'm in a fair bit of chaos trying to collect my thoughts, and I didn't put much thought into how this was going to be set out. Sorry for that, but I think through this mess you should be able to see what I'm trying to get at.

Some observations that haven't made it in so far, and need to:

Let's not panic. Liverpool deserved to win, yes, and we were for the most part pretty bad. But our systemic performance against Wolves, by which I mean the structure and shape of our pressing, execution of the high line and wide, high tempo attacking movement and passing, is a showcase for what is possible. My big concern at the moment is what Villas-Boas does for the upcoming Valencia game: do you go with the proven match winners or the proven system winners? The answer may seem obvious - let's hope that's the same for Andre.