As a tonic for losing 5-3 on your home turf to your local rivals, is it not preferable play a side you beat 5-0 two weeks ago in the Champions League, where motivation can come from the fact a win confirms progress to the next round ahead of two difficult games against Valencia and Bayer Leverkusen?

Unfortunately, no. We made a hash of things in terms of qualifying for the next round by drawing with the Belgians, but as Graham has already calmly explained we're still in fairly good shape, much to the dismay of those already hunting for Villas-Boas’ head.

While I won’t go into a major breakdown of what happened in Belgium, I will address two defensive mishaps from the match, and within those examples, perhaps see a pattern of a deep-running failure to properly execute Villas-Boas’ system.

Better analysts than me (namely Carefree Chronicles) have already had their two cents about the reasons for the goal we conceded. It’s a toss up between blaming Bosingwa or Ramires, or Torres if you really wish. I’ll have a quick look before moving on to the real point I want to make with this piece. 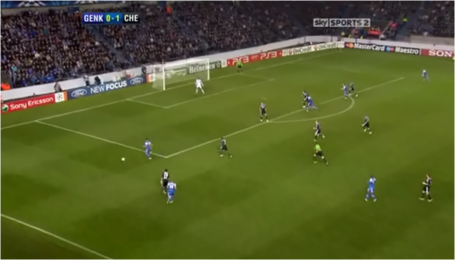 The image to the right is the crucial moment of the attacking phase. The ball has been played in behind Chelsea’s defence, and space is now conceded with the alarmingly high possibility for a dangerous cross to be played in.

How did we get here? I personally put a seventy-five/twenty-five split on Bosingwa and Ramires. Bosingwa simply presses too hard without thinking about the space he’s conceding in behind him, close to goal. It seems hypocritical that I blame a player for pressing too hard, but you really do need to think about the consequences of doing so in such a dangerous position, even more so considering the team was still in the process of shifting across as a result of the ball circulation by Genk. Also, Ramires must also cop some blame for his simple failure to stay with his man.

This chance came right at the end after Lampard had inexplicably missed an open goal. Here we have a threatening attack on the left hand side of Genk’s attack – a common pattern throughout the game. The key issue here is the complete lack of communication from the Chelsea defence and midfield. 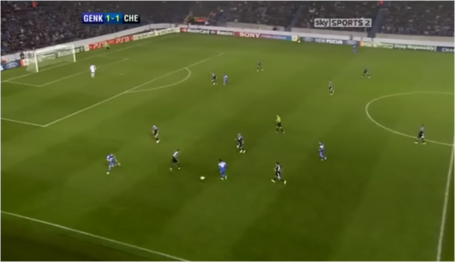 In this scenario, although it may look like Bosingwa is at fault again for pressing too hard, in reality he is doing his job quite well under Villas-Boas’s system - pressing high up the field. Furthermore, he is trying to turn the attacker away from the centre of the pitch. That's smart defending. Finally, he actually checks to see Ivanovic has De Bruyne covered, which he does. Then what’s the problem?

The huge gaping hole between the centre backs. It’s space – and as Mourinho will have you know, it’s criminal to concede space to the opposition. Fortunately on this occasion we are not made to pay, but instances like these can too easily be created by future opposition.

While one may argue that Ivanovic covers his man too much, we can analyse previous defensive systems from Andre Villas-Boas to go as far as assuming what should happen. 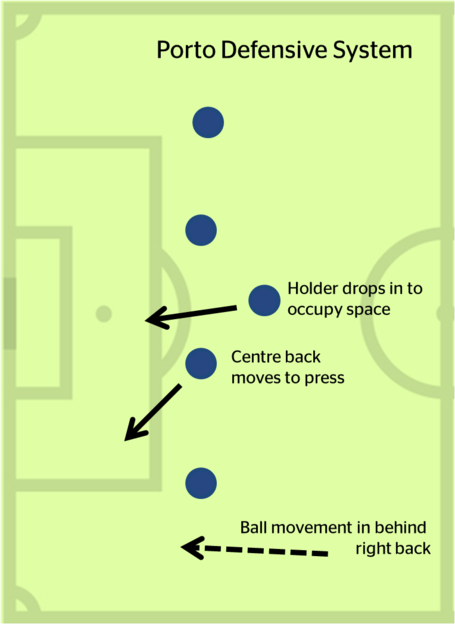 At Porto a similar set up was deployed, with a 4-3-3 in attack and a 4-1-4-1 in defence. The defensive midfielder played a critical role in the defensive organisation of the back four. The job of the holder was to stay central. This run against the current trend in world football where the holder covers the wide players, assisting the full backs – this type of system is also deployed at times by Jose Mourinho while he was at Inter, most evidently in the Champions League against Barcelona.

Fernando, the nominal holding midfielder under Villas-Boas, fills in the space made by a centre back that goes to press and help his full back. This is better illustrated by the diagram on the right.

What does this have to do with Genk? Well, we can see on the pitch the changes occurring to Chelsea’s style of play mirror those utilised by Porto last year. A high defensive line, high tempo pressing and passing, use of width, an inverted winger were all crucial tenets of the system that won the unprecedented treble.

One would have to agree that along this line of reasoning that a similar system to the one on the right has been adopted. But we still haven’t answered the question. What does this have to do with Genk?

The answer is Raul Meireles. Let’s have a look at the image again, albeit this time with annotations. 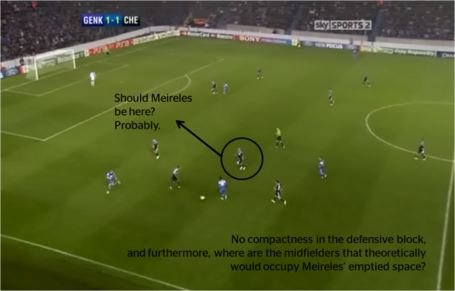 Meireles is not a holding midfielder by trade. Against the same opposition he showed his tremendous stock on the right side of the midfield two with two assists and a goal, and was playing very well earlier in this game on the left side of midfield double pivot, having come inches to a wonder goal. By this stage he had dropped into the holding role to accommodate more attackers, but that’s no real excuse for defensive disorganisation that could easily have been a goal.

Let’s go back, to wrap things up, to the very first image of Genk’s goal. Let’s now apply the principles of the Porto defensive strategy and see how the goal could have perhaps, in hindsight, been avoided. 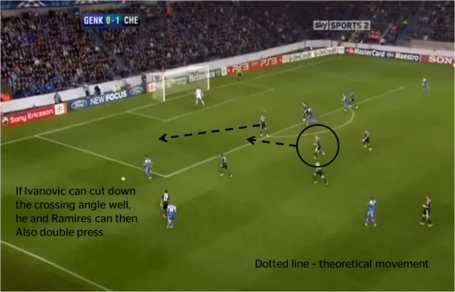 It’s easy for me to write hypothetically this kind of movement would have stopped the goal, but one can see the practical nature of applying the defensive principle in this scenario. All men in the box are safely marked, and Ivanovic is not marking anyone, so he is free to press. Romeu could have dropped in to plug the gap. Meireles can, as he is already, take up the position ahead of the defensive line.

You may have wondered why this story was called ‘Broken Promises’. On the Monday after that catastrophic Arsenal game, the Daily Mail ran a story about how Villas-Boas lashed his Chelsea charges with a cat of nine tails whilst yelling "you broke your promise". Yes, that is slightly exaggerated, but one can assume thanks to common sense (it’s the Mail) and the reassurances of Villas-Boas that the whole story was in itself, bullshit.

However, one can find truth in even the most far fetched Daily Mail story. Perhaps a cry of ‘broken promises’ may have echoed around the grassy fields of Cobham after the Arsenal game, and maybe that cry resonated again too when the squad returned back to the training ground.