Chelsea square off with Liverpool for the second time in ten days, at The Bridge no less. Can the result be better than the first go around? I don't see why not- with both sides expected to send out younger squads for the rubber match, everything is up in the air. More, after the jump: 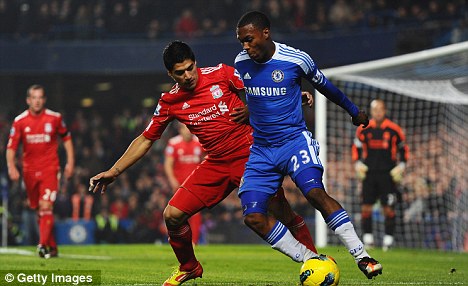 All to play for

While we may have exorcised the demons of lore this weekend, we're still not out of the woods. One win against an inferior Wolves side does little to satiate the most pressing concerns that we as fans share. But, it does give AVB the requisite tonic for the vitriol he's encountered from all angles in the press over the last month. But what follows over the next three weeks - home to Pool, away to Newcastle, home to Valencia, home to City - serves as a stark reminder of the challenges that lie in waiting. Tuesday's Liverpool encounter is paramount in that it serves as a springboard for any momentum efforts we can conjure. At this stage, it's clear to all those with a pulse that we need wins- maximum points. In the case of tomorrow's match, we just want to put in a good shift, give the kids a chance to play, and ideally pip Pool and move on to the next round of the knockout phase. On to the specifics:

There are a number of players that will likely be rested/are suspended/cup tied/carrying knocks heading into this bout. England's Brave will be M.I.A. after picking up his fifth yellow of the season over the weekend (savvy Mourinho-esque move there) which all but ensures Alex returns to the heart of the defense. Elsewhere, Raul Meireles is cup-tied with Pool for this one (bummer, I know), and if I'm not mistaken Ross is on a red card after his howler against Everton. AVB, in his pre-match presser, indicated a desire to stick to the philosophy inherit in our previous Carling Cup matches, opting to use this as a platform to blood some of the kids. It's all but certain that Ryan Bertrand, Josh McEachran, and Romelu Lukaku will feature, while Oriol Romeu might well get another run out in the holding slot after his solid performance against Wolves over the weekend.

The bigger question, however, revolves around whether or not Andre has the stones to start Fernando after three straight sub appearances. Never mind the fact it's against his old mates, I'd just like to know how it's possible for any of us to judge him when he's getting 8-minute cameo's here and there. Nobody was more surprised by Didier's three consecutive starts then yours truly, but I think it's safe to say he's getting a rest for this one. Sticking my head above the water, I'll give you what I want to see instead of what I'd expect (lord knows what the hell AVB will do but this would be my best guess). 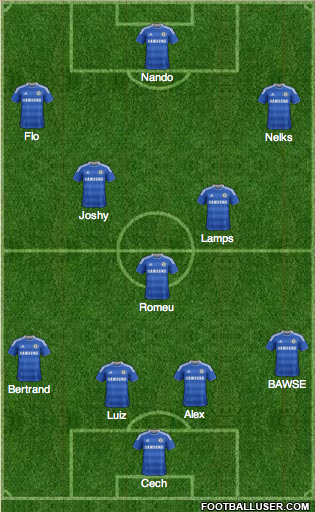 From Liverpool, lord knows. King Kenny has basically put a memo out indicating that they aren't going to be using a lot of the big names and will opt instead to play a lot of the kids. Fine by me. But, I think it's fair to say guys like Andy Carroll and Craig Bellamy will be in the starting lineup. I'd also venture Downing and Henderson will start, while Jamie Carragher will return to the defense. So while not exactly an entirely young squad, there will be spots up for contention. Again, I'm not suggesting this is easy, or that it will be simple. It's going to take another 90-minute effort top to bottom to ensure safe passage to the next round.

Beyond that, I'm just hoping for another composed performance. I'd fully expect AVB to use his subs, including Lukaku and Sala by the 60th minute (provided we have the lead). But again, don't hold your breath. We've all been either pleasantly or unpleasantly surprised by something or another that AVB has done this year. I'm hoping, however, this doesn't turn into another Everton match, wherein we go a man down and have to scrape out a win on penalties. No, please, not that of all things. I don't think I can handle that much strife at the moment. Just make it simple, get it done within the 90, and lets move on. I know everyone thinks this is our throw-away cup but in all earnestness, it'd be nice to win this considering we have a good chance of having it in hand if we navigate past Pool. For their part, Pool looked very composed against City, but a number of key personnel will be rested with only one day off between that and this match.

All I want, is one goal from us and off we go. But hey, if we can slip four goals past them, I won't complain.