Chelsea 3 Wolves 0: The Result We Were Pressing to Have

Share All sharing options for: Chelsea 3 Wolves 0: The Result We Were Pressing to Have

Three points with three goals that briefly took Chelsea to third; at the end of the day we were back in fifth spot but it's the result that matters above all as Andre Villas-Boas sought to rectify the alarming run of form.

He introduced Oriel Romeu into the holding position in one of the game's two surprise selections, the other being to select Didier Drogba up front, leaving Fernando Torres on the bench for the third time in seven days.

Wolves started with a 4-2-3-1 minus some of their best players in Doyle, O'Hara, Hunt and Stearman, and they changed to a 4-4-2 midway through the first period through the introduction of Sylvain Ebanks-Blake, but ultimately Chelsea were more superior across the pitch, and through some strong finishing wrapped up the game by half time.

It's refreshing to not have to talk about defensive errors for the first time in what seems a very long time. I'm going to take a look at the improved pressing and Ramires role, Romeu's performacne and the significance of Drogba's selection.

The most refreshing facet of this game was our renewed pressing game. Lately Chelsea have been lacklustre in their pressing and it has not been executed well. It is unclear whether that is the fault of the manager in a lack of communication or the fault of the players in a lack of execution (it's probably David Luiz's fault, as the media will have you know), but regardless it is a significant issue, that combined with a high line can lead to fatal results. 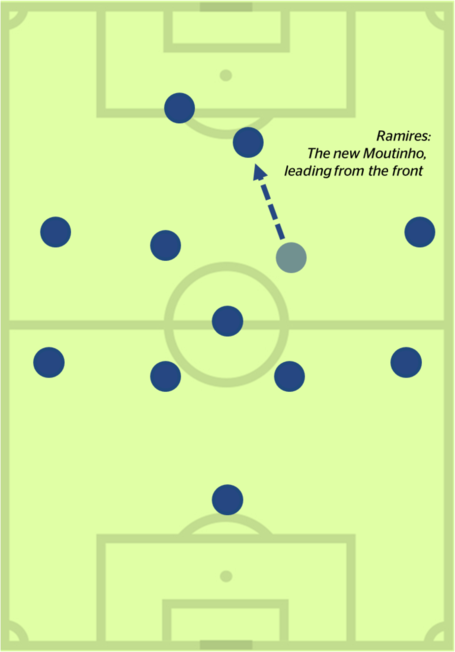 It was good to see in this game the pressing starting much higher up the pitch, pushing Wolves further downfield and forcing them into mistakes. The selection of Ramires and his role within the game assisted greatly in this.

When Andre Villas-Boas was at Porto, Moutinho played a key role in the tactical gameplan of the side. He would iniate the pressing from midfield, advancing off the lines to create a two person pressing block with Falcao against the opposition defenders. From a 4-1-4-1 the shape of the side would shift into almost a 4-1-3-1-1, where the main striker would still maintain the pressing highest up the pitch, but Moutinho would assist.

It's interesting to see the gradual advancements that Ramires is making in regards to his role - he is becoming more accomplished in instigating the pressing game. This was particularly clear against Liverpool where he would advance forward, most notably to close down Charlie Adam. Seeing him off break off the lines may be a common sight we will see in the future. His energy makes him ideal for the position, and a tendency to pop up in the box for goals a la Lampard promise much for the future of Ramires within Andre Villas-Boas system.

As a side note, he was less noticeable in the sense outlined above against Bayer Leverkusen due to the formational setup - playing as a deeper midfielder in the double pivot of a 4-2-3-1, Lampard was called up nstead to cut down the passing angles of the centre backs. 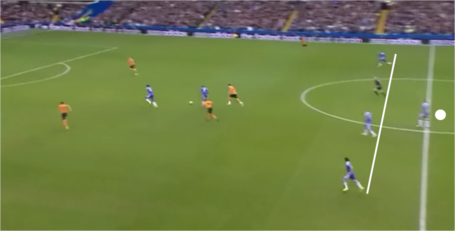 Ramires, while still generally very good in the first half of that match, was not as efficient in winning the ball.

In this game his pressing lead to the most crucial goal: the opener. He moved forward off the line of four in the 4-1-4-1 that establishes our defensive block, to create almost like a 4-1-3-2 as such you can see in the image below. He made a good run, forced a good save from Hennessey and the resulting corner was John Terry's goal.

Ramires' good performance set the tone for the whole team as a whole. We were pressing a lot higher up the pitch and forcing Wolves into the long balls, where a structured and rigid defence then efficiently playeed the ball out into quick transistions of defence into attack. The poor technical quality and poor structure of the Wolves midfield made this element of our game efficient.

In contrast, the Wolves pressing game was non-existent. CareFree Chronicles noted in his preview that Wolves pack numbers in a low defensive block, but don't pressure the man on the ball enough, leaving them open to good pieces of play. This piece of analysis was proven to good effect by Ashley Cole. For his assist of Chelsea's third goal, seven Wolves players behind the ball, and yet Cole has all the time in the world to pick out Mata's intelligent movement!

Ramires and Meireles seem to have a very good understanding of each other's roles, and they do complement each others attributes and skill sets in midfield. It would certainly be interesting to see this midfield three used again in one of the big matches coming up.

The pressing dropped off in the second half, naturally, and this allowed Wolves back into the game a little bit more. Dropping deeper was the answer to this, and towards the end there were some goals to be had as we looked dangerous on the counter attack. It's in this type of scenario Torres and Sturridge work better, utilising their pace and non-aversion to running at defenders.

Systematic defending is at the crux of victory in football; the cohesion and understanding in our defensive block was top class. Makes a nice change.

The summer signing from Barcelona B was granted a senior start, and he took it with aplomb. There were a few errors here and there, meaning Mikel is still probably the better choice at holding midfield, but if Romeu's stock continues to rise in a similar fashion to it's current trajectory, then there's nothing stopping him becoming our first choice holding midfielder.

As well documented, Romeu comes from Barcelona, where he was schooled, in the words of Villas-Boas, "the best [football] education in the world". He also had this to say of his young starlet

Oriol is not a player we have to teach how to behave in that position. He was educated in the best school in the world and today showed his character and personality. He receives the ball under pressure and always chooses the best option. He's a player you can count on for the benefit of the team.'

This shows the reverence that our manager has for Romeu, and rightly so. Romeu has come from La Masia, where he has been taught in a certain brand of football. This brand adopts the tactical tweak of the holding midfielder dropping in between two wide centre backs to allow the full backs to push on.

Romeu does this very well, and it was very clear in the trust that Terry and Luiz had in him with their positioning. When in possession, the two centre backs were very wide and Romeu dropped in well between them. Romeu's excellent control of the ball allowed him to comfortably distribute from deep. The best evidence of this system in working flux is Barcelona themselves, and more specifically, Busquets. The best evidence of this in practice within the game was Romeu's tidy pass to Cole which started the move for Daniel Sturridge's goal.

Take a look at Romeu's passing chalkboard, on the right which has been superimposed with his tackles and interceptions (orange X's).

You can clearly see his relatively accomplished passing from within his own half, statistical proof of his guilding of the ball out wide to initiate attacks. He also is not shy of foraging forward to add numbers in the opposition half.

The big man suspended on the bench has become the big man on the pitch, with three starts in seven days for the Ivorian. Didier Drogba has seemingly won favour with Villas-Boas despite the lure of our fifty million dollar man. Is it justified?

It's easy to argue yes and no for this, and the truth probably lies somewhere in between. Goals are certainly not everything, rather the team as Villas-Boas will tell you, and so the real crux of this issue is whether or not Drogba contribute to the system.

The first point to look at here is the attack. Villas-Boas system is based around quick passing in the final third, maintaining a high tempo down the wings and working inwards towards goal. The role of the striker is as a focal point of the attack. Drogba does this quite well, playing a high number of passes in the final third and spreading it wide on occassion. He does also drop deep to allow others to come through, and is not uncomfortable with filling in gaps to maintain attacking shape, as seen when he often pops up on the left and right to contribute to attacks.

he second point to look at here is his influence on the rest of the team's game. He allows others into the game, as we can see with the superb performances of Mata and Sturridge. In terms of moving the ball forward though, he does have an influence; difficult to judge if it has an effect. Compare the chalkboards on either side of this paragraph. Both are Cech's distribution graphs. On the left is when Torres, much less of an aerial target man, played against Arsenal, on the right is the game against Wolves where Drogba was up front.  On the left not one long ball was successful; there's a lot more long balls on the right; and a significant number of them are also unsuccessful. In this sense, Drogba does offer another outlet of attack, but he also can lead to a cheap loss of possession. With most stats, it depends what way you want to analyse it.

Finally, the defence. This is where I believe Drogba is lacking. While he does on occasion work well within our pressing game, he is lazy and slacks off. This increases the load on the rest of the team in their quest to win the ball back, and makes it more difficult. Then again, all our strikers do it; but in my opinion Drogba is lazier than Torres, Sturridge and Anelka when it comes to this element of our game.

Amendment: There's been a question on my comments here about Drogba and defending. Drogba's clearly better at defending set pieces. Fair enough to play him vs Wolves then, but why not someone different up front vs Leverkusen if playing him here was the plan? For the record, as a whole I think all of our strikers are pretty hopeless at frontal defending, but if Torres is (and should) be the main striker (longetivity the obvious factor here) then we should be giving him time to work on that part of his game. But there might be other factors we don't know about, such as Torres being unwilling to do this job or some sort of upper hierachy desire to allow Drogba to prove himself.

A good win, and just what we needed. A bit of rotation helped, but it would be good to have seen more. Bigger challenges lie ahead, and this result and this execution of system is the framework that needs to be maintained in those games. Keep up the standard, and Chelsea could come out of the challenges ahead with four crucial wins.