When an individual error leads to a fluke result, it's easy to rationalise a defeat. After all, any emotional reaction to a a Chelsea loss is always going to be an overreaction, and it's a good thing to take a step back and examine things in a calm and collected way. But, it's also possible to take it overboard. Taken in isolation, Chelsea's defeats against Liverpool, Arsenal and Queens Park Rangers are easy to dismiss. Together, they represent something we should think pretty hard about.

If individual errors are the problem, that's ok, but since absolutely everyone is making them, it's worth our while to look at whether the problem is systemic. Individual errors occur all the time, but they mostly don't matter - for many teams it takes a string of mistakes for a situation to go from 'harmless' to goal, because the defence is able to cover for one another. That's not really true of Chelsea, and that's to do with the team's shape leaving players isolated: 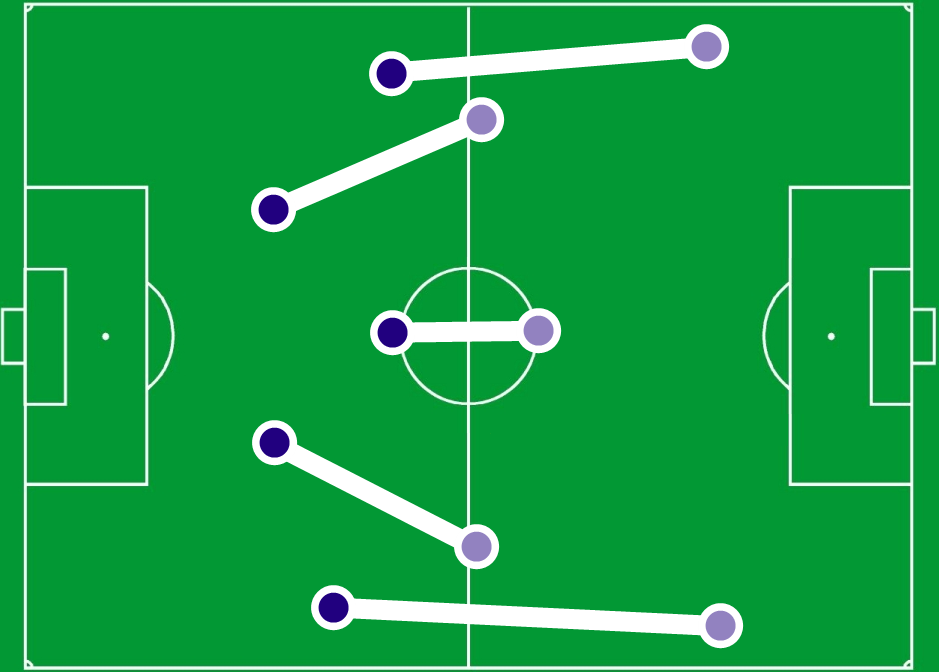 This is how Chelsea play. Look at the gaps that open when they're caught on the break! If the opposition gets through the midfield, there is basically no way for the defence to recover. I don't think any of the centre halves have had good seasons, but it wouldn't matter if it was the Thaigo Silva and Nemanja Vidic out there - we'd still be leaking goals.

Chelsea are making individual errors that lead to goals because our defence is so stretched that it cannot possibly function as a unit. That means one mistake puts the opposition through on goal in overwhelming numbers, and that's why we're seeing so many brutal mistakes on the part of the defences - they were being made before but we've previously always been able to cover.

One of the more interesting holdovers from the Jose Mourinho regime has been the relative inability of the team to tackle. Mourinho's always been more interested in pressure and space denial than ball-winning, assuming (very reasonably) that a frustrated team is likely to make mistakes without the defence opening themselves up by challenging for possession. Chelsea, as a result, aren't actually very good at flat-out winning the ball, which is what they're being asked to do under this system.

That's not the only problem with the team, however - the attack is reliant on Juan Mata, and they're reliant on getting him into the middle of the pitch. Their key attacking players in most lineup are at their best on the inside, and that means the full backs are forced to bomb forwards whether they want to or not, because otherwise the Blues have no width.

None of this is news, and Chelsea's flaws have been covered in depth by many analysts, and I don't think my proposed solution is news either. We need to get Mata more involved, decrease reliance on the fullbacks, and shield the defence better in general, and those three factors imply that we should be switching to a 4-2-3-1 with Mata central.

But a straight 4-2-3-1 with Chelsea's personnel isn't necessarily the best option, because we don't have any true wingers, players who'll allow the likes of Ashley Cole and Jose Bosingwa to chill the flip out and not play as auxilary forwards. Having one flank entirely controlled by a fullback is ok, but having both? Not so much, especially when they keep getting caught high up the pitch.

So I'm proposing a slight tweak:

The most obvious feature of this shape is the right flank with both Ramires and Bosingwa active out there. Ramires is a surprisingly good wide player (see his performances in Carlo Ancelotti's 4-4-2), and his defensive abilities and stamina will help cover for Bosingwa down that side. The insane line the defence is holding becomes an actual defensive block with at least six players in position to defend even on the transition, where Chelsea have so far been very week.

Mata is more involved, the defence is better covered, and although neither Lampard nor Meireles are the strongest defensive players, they'll be able to dictate play beautifully if they sit back. I'm not saying that I know better than Andre Villas-Boas here, but this seems like the obvious answer and I'd certainly like to see him play with it, especially considering how Chelsea played against Liverpool after halftime, when they switched to a 4-2-3-1 at half time.