Having dropped points against Genk in the last Champions League game, Chelsea has to win this game against Bayer Leverkusen at BayArena to ensure the passage into the knockout rounds as group leaders. The recent home loss to Liverpool means that Villas-Boas needs a big performance from his players in order to silence his critics.

Bayer recent form, both home and away, has not been consistent. But they will have the advantage of a four-day rest going into this game. 4-2-3-1 is their preferred formation, with former Blues Michael Ballack lighting it up from the attacking midfield position. However, it is the skill. pace and flexibility of Sidney Sam that will post a major threat against Chelsea's fragile back line. Here is my scout report.

Bayer's recent form has been all over the place; 3 wins, 2 losses and 1 draw in last six games in all competition. They are currently 7th on the Bundesliga table, 7 points off from the league leader Bayern Munich. While they have managed to beat SC Freiburg (currently 17th in a 18-team league) and Kaiserslautern (13th), they drew with Hamburg SV (14th) and were beaten by Schalke 04 (4th), both at home. They are a team that have good individual talents but, collectively, they have so far under-performed.

In the last two Champions League games, Bayer has played Valencia home and away, winning the home match 2-1 and losing the away game 1-3. In both games, Bayer conceded the first goal and had to fight back. Early pressure might do Chelsea some good in this upcoming game.

Bayer Leverkusen, though, aside from the home team advantage, has a big advantage over Chelsea in that they had four days of rest since their last game, which was played on a Friday, while Chelsea played on Sunday. Also, there is a difference in the quality of opposition: Chelsea played a close rival Liverpool, while Bayer played 13th placed Kaiserslautern. The home team is well-rested and confident coming into this game. 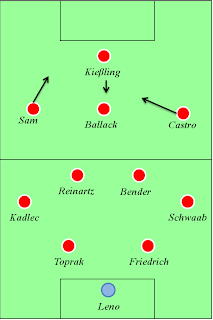 Bayer Leverkusen's last game was a league away game against Kaiserslautern. Bayer won 2-0 via two second-half goals. It took about 53 minutes to break the home team down but, at the end of the day, it was a comfortable win for Bayer.

Bayer lined up in their usual 4-2-3-1 formation: Kieβling the lone stiker; Ballack the central attacking mid with Sam and Castro on the flanks; Reinartz and Bender anchored the central midfield; and the Kadlec, Toprak, Friedrich and Schwaab made up the back line.

In attacking phases, Sam pushes up wide from the left but Castro drifts in centrally. Ballack, despite being the tip of the attacking midfield, tends to arrive late to support the attack (more on that later). Out of the two central midfielder, Bender is the one who often pushes forward.

In defensive phases, both of the wide players, Sam and Castro drop back along side Reinartz and Bender to form two four-person defensive blocks while Ballack roams just in front of these two defensive layers to put pressure on opposition.

Despite being the more dominant team for much of the game, Bayer had a tough time breaking down Kaiserslautern in the first half. This was because they were very narrow in the midfield. Kieβling usually drops deep into midfield to get involve and Castro consistently move centrally from his wide right position. Combine that with the two fullbacks staying conservatively in their own half, Bayer lacked width. Only Sam on the left wing provided any kind of width.

This may be a sign of their inconsistency rather than a systemic problem because they scored by getting on the end of crosses from the wings in both games against Valencia (for one of which, Ballack was the provider). It may also be useful for Chelsea to know that both of these crosses came from the left side of Bayer Leverkusen's attack.

As far as the line up is concerned, Bayer could make a couple of changes against Chelsea: Rolfes will probably start in place of Reinartz in midfield and Schurrle will probably come in for Castro to play on the left wing, with Sam switching to the right.

I have mentioned above that Ballack likes to join the attack late as Bayer's front three initiate the attack. The goal he scored against Kaiserslautern is a great example of that. Sam (yellow star) bamboozled the two defender on the left. Ballack (red star), at this moment, is at edge of the center circle, looking to move forward through the two Kaiserslautern players in midfield.

Kieβling movement centrally pushes the defense back and when Sam cuts the ball back into the middle for Ballack, the former Chelsea player has both time and space to launch one of his left-footed rockets from outside the box. The shot was straight at the keeper but the power and the spin of the shot was too much for the keeper to handle.

This is not an isolated incident. Ballack was in similar position and took similar chances in the first half of the game. Additionally, he scored from this kind of situation against Genk, with the help of a fortunate deflection.

Chelsea's defensive midfielder(s) of the day will have to track Ballack's movement closely to prevent this kind of opportunity for the German. Mikel has been in hot water for this recent blunder but the Nigerian's physicality and defensive awareness will be the best protection against Ballack's threat, and any long range efforts from other Bayer players (trust me, they love to shoot from outside the box).

In the Ballack goal, we have already seen what Sam can do from the wide position. Now, we see him (yellow star) in a more central position for Bayer's second goal against Kaiserslautern. This attacking movement came from the center channel and it was pretty narrow until Bender (the forward running central mid of the 4-2-3-1) moves towards the right to provide a little bit of width.

Bender dribbles into the box and squares the ball to Sam, who has escaped his marker in the box. One touch and the curling shot to the far post sealed the deal for Leverkusen.

Sam is currently the top goalscorer for Bayer with 5 goals; Schurrle and Kieβling, the other two in Bayer's attacking front three, are both on 4 goals. If Schurrle starts against Chelsea, Sam will probably play on the right wing. From what I've pointed out so far, Sam's adaptability is apparent. He will be a threat to both of Chelsea's defensive flanks, and down the middle if he feels like it.

He has pace, skill and shooting ability. And he is Bayer's main outlet in counter attack (that's how he scored the winning goal against Valencia in the first leg). Danger man? Most definitely.

The Task at Hand

An away goal (or two) will obviously do Chelsea a lot of good and early attacking pressure should be applied to Bayer's defense, which tends to fall asleep in the beginning stages of the game. If Bayer gets narrow in the middle, we will need to exploit the space in the wide areas. Defensively, we will have to track Ballack's late runs (don't give him time on the ball) and be cautious of Sam's movements (cut of the supply before the ball reaches him). Barring any self-inflicted wounds (fingers tightly crossed), Chelsea should come out victorious.