Grace Period Is Over

Share All sharing options for: Grace Period Is Over

I get it. This isn't an easy gig. There's plenty of pressure on your Portuguese shoulders. Our owner is fickle, our fans are impatient, the press relentless, and the expectations massive. Trust me, I understand what you're feeling. Well, not really in a literal sense- but I get the jist of it. With things going the way they have over the last month, you've taken the 'close-the-doors' mentality, fortifying yourself in a self-constructed installation that seems impenetrable to the most probing of post-match inquisitions. I get it. You don't want to abandon your style so early in the process. You want the chance to implement it slowly, and have players transition into this new on-pitch mentality and demeanor. It makes so much sense in theory there'd be no reason for it to fail, right? You know the answer to that one. I'm not going to pander to you Andre, you're better than that. I'm just going to level with you, man to man. Because, quite honestly, you're not open to suggestions at the moment- and you need to be. You really need to be. 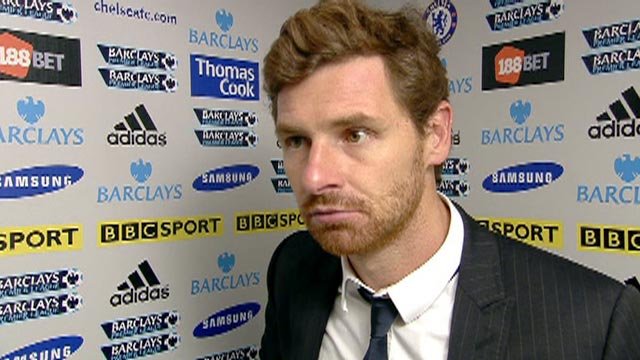 A Season on the Brink

Look, I'm not a scholar of the sport by any stretch. I'm not an aristocrat of the beautiful game, a proponent of the style-over-substance argument, or a staunch advocate of any side of the fence. Simply put, I'm a fully-invested supporter of Chelsea F.C. Be it good or bad, I ride with the tide that this club endures, and I'll be bold and say this season has been a turbulent one thus far. Many of us were willing to acknowledge in the beginning that such would be the course, while others dug their heads in the sand and refused to consider the very realistic probability that we'd be on the outside looking in. A quarter into the season, and we're no closer to knowing anything about this squad than we were in the early days of August. There have been flashes of brilliance, marred by mental lapses and slack performances. There have been spurts of excellence, sometimes so stylish as to suggest the end of our 'rough patch' is on the horizon- only for it all to come crashing down with a dismal showcase the next week. It's gone from good, to bad, to great, to poor, to somewhere in between heaven and hell at the moment. This ain't purgatory though. This is something far more sinister.

I'm in no position to offer suggestions as to how this turns around. Why? Well, aside from the obvious lack of technical knowledge and tactical know-how, I have a fairly untrained set of eyes when it comes to analyzing the flow of proceedings. All to often, my line of sight gets caught ball-watching instead of observing how plays develop. Unless I watch over 20 hours of footage in quick succession, I'm not going to be offering any tactical suggestions for how this all works out. And frankly, I'd be daft to even try. Because, as I think we can all agree, the problems right now aren't simply about tactical miscalculations. No, they're systemic. They're a plague. An infection. A virus. Something that has wrapped its ugly jaw around the throat of our collective psyche and refuses to relent. Figuring out what 'it' is, is only part of the equation. The other half? Opening yourself up to the very real possibility that you might have made a few mistakes along the way.

Andre, it's just me talking to you right now. No cameras, no pen, no paper, no laptop. Just a friendly conversation. Here's what I know. You rode into town on a silver horse and had everyone eating out of the palm of your 36-year-old hand. Good for you. Genuinely, good work on getting everyone to acquaint themselves to you in such a rapid fashion. You cleaned house, replacing a litany of staff with your chosen allies. Solid decision on bringing back Robby D for the assistant gig. You had your way in the transfer market, and secured a few promising signatures. Mata was a steal, Courtois looks like the future, and Romeu a solid prospect for the foreseeable future. Again, brilliant work on your part. You might have failed in your pursuit of Luka Modric, but it seemed the returning squad mixed with your new additions was sufficient on paper to suggest we were on our way to challenge for titles on four fronts.

But you came in cool and collected. I don't want to skip past that just yet. You came in with charm, eloquence, and a capacity to communicate in the local dialect. All great things in this hyperactive marketplace. You sauntered across The Bridge with your first team staff, posed for photo opportunities, smiled on cue, said all the right things about the future, the owner, the fans, the players. If I was grading you on your entrance, you'd get a 100 %. You made sure to misdirect all Mourinho questions for the time being, and even blushed accordingly when some tried to put his legacy around your neck and anoint you the 'new' Special One. You handled it all with relative grace. And you're a good guy it seems. So we all fell for you in the early days. And some of us are still in love with you Andre. We are. Don't assume we're all full of venom at this stage. Some tend to be a bit more impatient than others, but we remain solidified in our insistence that we want the best for the club. Not the brand, not the bottom line, not the players, or the coach- but the club.

It's obvious that things on the pitch right now are quickly spiraling out of control. Defeats to Manchester United, QPR, Arsenal, and Liverpool have rendered us mute in the title hunt. We're so behind at this point, many have even given up the chance of a top three finish. Some are resigned to simply fight for the fourth Champions League spot. I know you're not though. But I'm going to level with you right now- if you want things to start swinging the opposite direction, and for the majority chorus to rally behind you and the players, you've got to drop the attitude. You've got to take the chip off your shoulder, you've got to expose your mistakes, you've got to be earnest in your admission that you might have fucked up here and there. Nobody respects humility more than the die-hard supporters that scrape money together week-in and week-out to follow you and your blue warriors across the continent. Nobody will appreciate the sincerity of your words more than us.

It's easy to lock yourself in a box, refusing to budge, insisting that there's no way you can change the style, and vehemently denying that Roman would ever sack you this early in your career. Child, please. If there's one bit of advice we can all offer, it's to stay on the right side of Roman. Don't put words in his mouth, don't speak on his behalf, don't make assumptions, and don't for a second feel that you're invaluable to the set-up. Everyone is expendable in the realm of Roman. He could wake up in a week and decide the lure of Guus on the sidelines is too tempting, and alas, you're back in Portugal and Hiddink is on the touchline for the end-of-the-year run. Do I think it will happen? Absolutely not. But is it an outside possibility? Certainly. There's no telling what could happen these days in SW6, and I'm not laying all the blame at your doorstep Andre.

Your players, they're accountable. Your training staff, accountable. The club hierarchy, who've gone about creating PR windstorms everywhere this year? Accountable. The fans, who came out in full force during the CPO crisis? Accountable, if only for letting personal considerations pollute the quality of home support we should expect for every match. Everyone owns a share of this disaster today, and perhaps you own a few more than others. After all, it's your squad. Your fucking squad to meddle with. Your lineup to select every week, your rotation system to implement, your ability to motivate, your capacity to inspire, that puts the best product on the pitch. I'm not going Gladwell on you, and I'm not going Rovell and launching into a 'the team is a product and the club a brand' tirade. I know it's a damn business, and you do too. Let's stay away from that grey area and leave that posturing to the experts. Let's talk about what's really going on here.

As fans, we obviously covet titles and trophies. But beyond that, we crave consistency. So far, Andre, you've shown us little in that regard. But we still support you, we still buy tickets, tune in, and write lengthy letters to you in the hope that somehow, you'll realize that everything is still in front of you. Forget the past, burn the tapes, don't even bother watching the film of these losses. Move forward, stop putting square pegs in circle holes, and let these guys play. We may have some rusted parts, but we have plenty of quality in the side to dominate every single team we play. I refuse to buy into excuses, and I refuse to believe that anything is over yet. But it's on you to make this situation into a positive one. It's totally on your shoulders now. One of the things we used to love about Jose was how he would take the media spotlight off the players and carry the burden of expectation on his shoulders. He would remove all distractions and concerns from the players minds, and free them up to simply get out on the pitch and play loose and free. You're in the same spot right now. It's not working, and everyone's looking right at you. The question is, will you rise to the challenge? Or will you buckle under the weight of expectations?

I guess time will tell. But for now, I'll keep my fingers crossed that you figure it out- by Wednesday.