Chelsea 1 Liverpool 2: Two Mistakes Too Many

Share All sharing options for: Chelsea 1 Liverpool 2: Two Mistakes Too Many 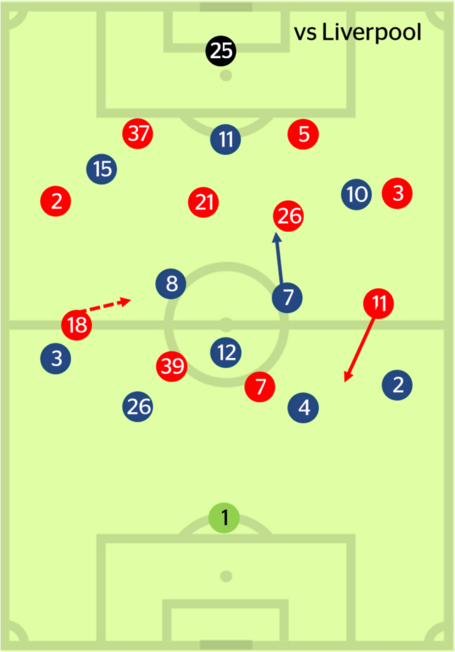 A late goal from ex-Chelsea defender Glen Johnson won the three points in an interesting tactical battle, continuing a trend that began with Daiglish's back three last February.

Another defeat for Andre Villas-Boas and Chelsea, making it three in four Premier League games that Chelsea have come away with nothing. Only one win in normal time since beating Genk 5-0 one month ago is putting the Portugese under pressure, with Chelsea looking more and more like title pretenders every week.

He sent out Drogba instead of Torres flanked by Malouda and Mata, while retaining Ivanovic as right back and recalling Luiz to the centre. Liverpool on the other hand set up with four versatile players out wide and up front, a clear indication of Daglish's proposed tactics.

Chelsea may rotate under Villas-Boas but the base of the way the team plays will always be largely the same. The surprise tonight came in the selection of Drogba and Malouda, but apart from that it was a Chelsea team we're used to seeing.

Liverpool on the other hand went for something rather removed from anything they had done previously this season against top sides. Where they would normally go for a 4-5-1, they went for a 4-4-2 that on first impression, could be identified as a 4-2-4.

The front four played quite high up the pitch in the first half, with tactical tweaks to accomodate for Chelsea's strengths and weaknesses. Kuyt played high up to push Cole further back, leading to a subdued performance from the English left back. Kuyt also moved into the center to block off passes through to Chelsea's wide attackers when Chelsea had the ball. As Kuyt was high up the pitch, he left a lot of space in behind him which Johnson didn't push into overly well. Instead, Lucas tracked out wide quite often, as seen in his passing stats, heavily right-sided.

On the other wing Rodriguez played the same position as well when defending, but made clever runs between Luiz and Ivanovic, particularly as Suarez pulled the centres of position. This worked to good effect early in the first half.

Liverpool's tweaks largely worked better in the first half, as they occupied the different attacking tenets of our play and generally defended solidly as a unit. In particular, Skrtel won 100% of his tackles, ground duels and aerial duels. Enrique also defended well against Mata, who struggled, like Malouda, to get the ball in any sort of meaningful position in the first half. This lack of service can be linked to the smart positioning of the wide players.

The second half saw Villas-Boas introduce his changes to bring Chelsea back into the game. He did the same as he did against United, removing a central midfielder, introducing a wide player and moving Mata centrally. It became a 4-2-3-1, with Lampard and Ramires in the double pivot. 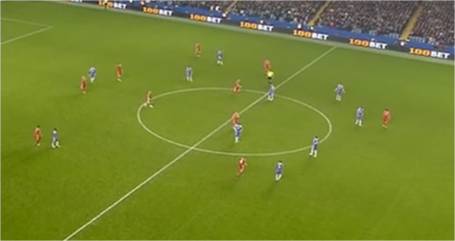 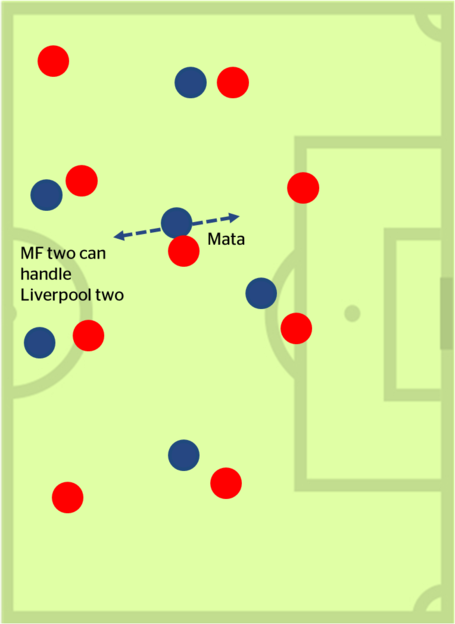 This formation worked very well, as it did at Old Trafford. The defence is better supported by two holders, who also have more freedom to break forward singularly.

Mata in the middle may not always work, but it definitely did here against a non-traditional holding midfielder like Lucas. He's more of a terrier than anything else, and struggled positionally with Mata's movement. First he tried to follow him, which allowed Lampard and the wide players more space in the middle, and then he tried to ignore him, which just gave Mata time on the ball.

In the match against United the same thing occured, but not quite as a duel but more so that Mata had freedom in the space between unoccupied lines. In that match neither Carrick and Anderson did a very good job of covering for his movement. This would probably be the opposite against a team with strong holders with strong positonal sense - City for example, with De Jong, Barry or Toure all capable of matching up to Mata's movement within a double pivot.

The 4-2-3-1 also puts a player closer to the main striker, which helps because there are occassions when Torres, Sturridge or Drogba look isolated and frustrated. Torres played his best game of the season in the United 4-2-3-1, thriving on the attacking three behind him and a playmaker in the hole directly behind. This is reminiscent of his best at Liverpool, where he became the most feared striker in the Premier League thanks to a tandem with Steven Gerrard. Getting Torres on earlier may have made a difference.

Daglish's changes were to switch to a 4-1-4-1, with Lucas in between the banks of four and Rodriguez dropping into central midfield. The wide players played much deeper - but so did the whole team as a defensive unit. They were inviting Chelsea onto them, and Chelsea were taking the iniative.

The switch caused confusion in Liverpool's press as well, most noticeably for Sturridge's goal, where a combination of shape shift and poor individual qualities contribute to space which Malouda attacked. 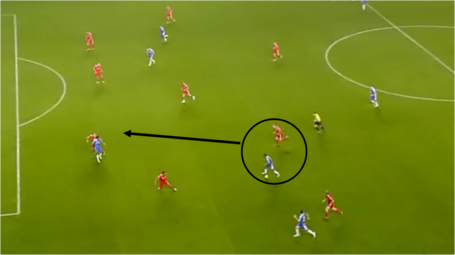 This was synoptic of a wider issue for Liverpool - a disrepancy in midfield numbers. Rodriguez isn't overly good in his defensive qualities either, and Lucas's struggles with Mata allowed Chelsea to control the midfield zone. Daglish rectified this by bringing on Henderson, who intercepted the play well and was more imposing in his central midfield role, compared to Rodriguez. Chelsea's influence waned. Subs were not made til too late, and an individual error decided the game.

To quote Michael Cox of Zonal Marking, who summed up the final stages for Chelsea perfectly:

Having gone long too frequently when Drogba was on the pitch, Chelsea now had to be direct…but now had Torres upfront, clearly less of a force in the air.

A final, small point of interest: we played 56 long balls in this match, twelve less than the last time we played with Drogba as the main striker, vs Bolton (68).

The high press is integral to the execution of Chelsea's gameplan, and when done well, it leads to devastating results. It wasn't quite devastating for Liverpool, but it was effective. 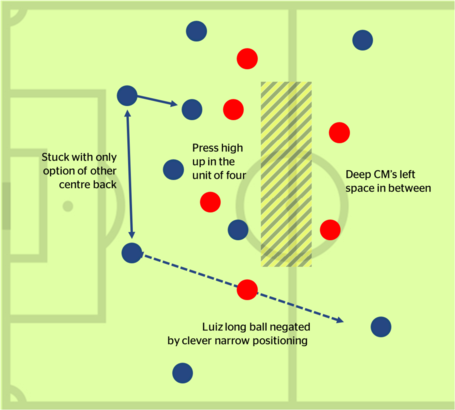 The unit of four attackers was, as aforementioned, crucial to Liverpool's first half victory.

The diagram on the left sums up the

pressing game Liverpool played in the first half. Chelsea were put under pressure when carrying the ball out of defence, and often Terry and Luiz could only pass the ball between each other. This is reflected in Terry's passing chalkboard.

The one drawback to this gameplan was that often when Chelsea bypassed the frontal block, there was space in between the attackers and the two Liverpool midfielders. This is represented by the hazard zone on the diagram. However, poor first half performances from Lampard and Ramires and a lack of quality on the ball (Mata) meant that any effective penetration didn't happen. The movement of Mata in the centre at the start of the 2nd half (before the Liverpool changes) went some way to changing this.

It would be nice to review a game and not have to talk about individual errors, and although they happen in every game, it's the fact that for some reason this season the errors have been hideously costly that means they need to be covered.

The first goal came as a result of two things: Mikel taking too long on the ball, and Liverpool executing a smart press. The dropping deep of the holding midfielder in isolation is hardly a novelty to anyone who cared to watch Chelsea at least once, and it's no real surprise that it was caught out. Variety in our ball movement will solve this issue. It's interesting to note that at Barcelona, when an opponent plays high up the pitch on goal kicks, they drop deeper, so much so that at one point Pique collected the ball from Valdes on the goal line. With Drogba up front, this was probably unnecessary.

On Mikel, it seems a little harsh to call for his head and demand his listing. As far as my memory serves, that's the first mistake he's made that's led directly to a goal, and he's normally very composed in scenarios like that. It's probably just the Mikel haters, but it's frustrating to see someone subject to abuse he doesn't really need when he clearly didn't mean to make a mistake.

The second goal is seemingly the less obvious of the time as a clear mistake on Chelsea's part, but Ashley Cole's hideous defending cannot be ignored. It's schoolboy stuff to overcommit like he did with Glen Johnson, who barely needed any sort of trick to go past him, just a simple knock into the side. Cole's been pretty prone to do stupid stuff like that all season, and it's something Villas-Boas has clearly picked up on, with his chasing of Alvaro Perriera, and to a lesser extent, Contreao. It would be good to see Bertrand to get more games as to ascertain if he's suitable to step up.

Villas-Boas is young, smart and brave. Taking on the Chelsea job takes some balls, and the rebuilding project is even more gutsy. It's sad to hear "fans" calling for his sacking, when a Hiddink re-instatement would just, in the words of a Twitterer, place a "bandaid on a tumour".

This was a fascinating game from a tactical viewpoint, but from a Chelsea viewpoint, it's frustrating. We're on the brink of converting games to points, but it's this rut is seeing us drop valuable traction in the title race. The storyline of the game proposes some interesting questions involving shape and personnel. Villas-Boas needs to address the answers, or a bad result in Bayer will only deepen this slump.