It is not a question of the owner having patience. I have said we have set out to build something new at this club and the club is committed to what we are building for the future. ...

The perspective is we have to win every game if we want to make this a title challenge. There is no running away from responsibilities, there is no calling this a year of transition. Our responsibility is to win the most amount of trophies and at the moment we are in all of them and that is what we have to believe and focus on. 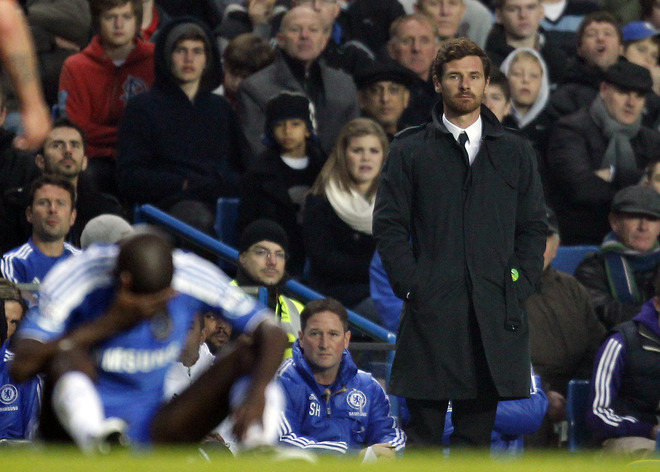 The above quotage is highly interesting. Call it stoic defiance from Andre Villas-Boas. It's very much endearing. There's no shying away from accountability or the pressure that comes with inheriting the managerial position at Chelsea Football Club. There are expectations, our manager says, and right now this club isn't living up to its bill.

He's right. Everyone involved must share the blame, too. Now, go out and fix it.

The Rundown
• We lost, our second consecutive at Stamford Bridge for the first time in the Abramovich era.
• The first half was the worst experience of the season for me.
• Didier Drogba, though he improved in the second half, has lost the plot.
• Ashley Cole is no longer the world's finest left fullback.
• Liverpool just about deserved the points.
• I can't believe I just said that.

Mindless musings from another dire afternoon
Here, Jack provides aimless rambles on today's match. Disclaimer: Jack is not responsible for any offensive language, typos, or incomparableness featured in this section

What the hell was that? I'm not referring to the 20-plus minute span during the second half in which we resembled Jonah Hill immediately post-adrenaline needle in Get Him to the Greek. Or maybe we were Sergio post-hotel room arson incident. Either way, Liverpool were running for their collective lives at that point. What I'm talking about is the rest of the game. That first half in which we were akin to Hill mid-threesome with that chick from Mad Men and Russell Brand. We were shunned to the side, confused and angry, watching Liverpool have their way and without the means (or backbone) to do anything about it.

I'd argue it was worse to sit through than the second-half capitulation against Arsenal. I, for one, was at first simmering then resigned to another day of forced psychotherapy. The brief respite brought forth by Daniel Sturridge and a few others, namely Juan Mata and Ramires, served only to intensify the fury that erupted from this hollow shell of a man when the inevitable winner surfaced through Glen Johnson. Fucking Glen Johnson.

Chelsea can't handle Liverpool's Johnson. Of course. Ashley Cole, anonymous in the attacking third, was embarrassed by the former West Ham and Chelsea fullback. Then Florent Malouda was found wanting. Before you knew it, Petr Cech was picking the ball out of his own net ahead of a dejected John Terry. Cole, once deemed the world's best left-back around these parts, has this season looked more like a high-mileage Datsun than an elite defender. Perhaps now we can understand why Villas-Boas showed real interest in Fabio Coentrao in the offseason. And speaking of England's Brave John Terry, can anyone remember seeing the man look as frail, slow and vulnerable as he did today? He was egregious. You really have to wonder if he can survive playing the Villas-Boas style. Extremely worrying.

Removing Ramires also was a dire individual mistake, one that falls squarely at the feet of the coach. No Ramires and no Mikel? Villas-Boas effectively opened us up with that second midfield substitution. Yes, Raul Meireles was pushed forward in an attempt to find a winner. That doesn't mean we should sacrifice a shield in front of the back four, though. I don't think it was a coincidence that we kind of unraveled at that point.

As for those supporters who are already after Villas-Boas' head, I refer you to my comment from today's Rant Box:

Anyone calling for Villas-Boas' head at this point is spouting rubbish.

This is a process, and it's difficult to progress when your personnel is continually mucking up at an unseen rate. John Terry isn't fit for this system on the last few games' evidence; when was the last time you saw him put in a truly egregious performance like he did today? Cech and Mikel combined for a cock-up of epic proportions. Ashley Cole is not only succumbing to age but also the shear amount of games he's played over the past 3-4 seasons.

Anyone who thought we were genuine title contenders at the start of the season - without the blinders on - was really not looking at the situation objectively. Basically the same side of the past three seasons plus Juan Mata. And while Mata is a great prospect, he alone can't morph us into Barcelona. Did I think we would be this poor, or that we would be having such trouble? Of course not. But I certainly didn't think we were looking at competing for the title.

Challenging for a Champions League place was always going to be difficult. This run through the end of December, which features a host of damn tough fixtures, is going to go a long way in determining how successful we are this season.

Moving on to more ramblings.

John Obi Mikel was at the center of a fucking firestorm after his mistake in the first half led to Liverpool's opener. He certainly deserved to be questioned, but to be singled out, and for some supporters to all of a sudden suggest he's always been shit is laughable at best. Sure, Mikel dwindled on the ball for far too long. But what was Cech thinking playing him a short ball in that position? Terrible decision. Furthermore, Mikel wasn't the only one making individual mistakes. Terry made two in the opening 15 minutes only to be bailed out by his teammates. More troubling than the Mikel lambasting? That these individual lapses continue to emerge. Shocking stuff.

Is 4-2-3-1 the way forward? It appears so. Mata spent much of the opening half isolated. I can count the times he was able to get involved on one hand. Moved centrally at the start of the second half, the Spaniard roared to life and so too did the entire team. It'll be interesting to see how Villas-Boas reacts to this, especially as we know that Fernando Torres enjoys working with Mata in that free role behind him.

And now for Liverpool. Still hate them. You know, I also think they were a tad fortunate to leave London with the win. However, I won't begrudge them the points because of their excellent first half and just the overall poorness of our performance. Sure, had Branislav Ivanovic buried that header shortly after we leveled the match, things would have been drastically different. He didn't, though. Fact is, King Kenny had his men prepared and they took advantage of the chances that were presented. They remained disciplined - something we can't come close to arguing for our side - and featured much more fluidity up top. Shame, really, as we should have provided more of a test, without question.

But it is what it is. We have to tuck this away in the mental rolodex and refer to it for motivation as the season progresses. There is much to improve on (understatement of the decade). Here's to hoping Villas-Boas is as up to the challenge as he seems to be. A midweek win in Germany followed by a nice display against Wolves at the Bridge on the weekend, and we're back to feeling good. It's a long season, my friends. Keep the faith.