I'm nervous. You should be too. More, after the jump: 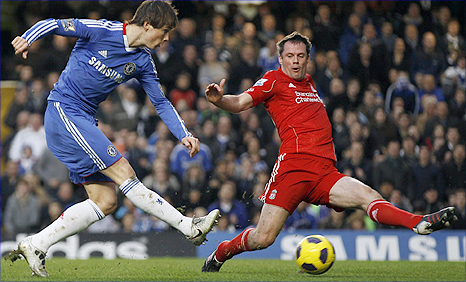 Welcome back. It's quite possible many of you fell asleep during this snooze-fest of an international break. And here's the deal- I honestly tried to give a shit about the matches over the last two weeks. But the drama, the intrigue, and the overall interest in my household was at an all time low. I was tiding myself over with a healthy dose of Sepp Blatter's epic meltdown. Otherwise, I've had an eye on Sunday for some time now. I'd consider it our second most difficult match to date (United the first) and one that, if we were playing better, would be an excellent litmus test in our maiden season under AVB. But since, quite honestly, our form has been woefully erratic over the first three months of the campaign, all bets are off. Recall, we slipped past a Blackburn side by the skin of our teeth heading into the break. So color me surprised if anyone thinks we're 'flowing' at the moment, but you'd have to be wearing blinders to suggest we're having a great year. We're not, and frankly that's okay for now. It's a year of evolution for us, and like it or not, AVB isn't going to rip the script up and abandon his plans just yet. So, buckle up for what promises to be an eight-goal thriller of slack defending, and serendipitous scoring.

Why: Quite simply, because we need it. Yes, I agree with Jack that this isn't a 'must win' fixture. But I won't cop out that easily. No, I'll admit that I want this one. Badly. It wouldn't necessarily set right all that presently ails us, but I feel it would do wonders towards setting us on course to finish out the calendar with a bit of momentum in our favor. It doesn't matter where we are in the table, or they are for that matter, this is always a fixture that seethes with venom and general dislike. We can mask it however we want, but none of us can say with a straight face that we don't openly loathe the lads from Merseyside. The poaching of Nando, Meireles, and Benayoun aside, we're faced these guys so many times over the last four years I've lost count. But last year, under the stewardship of El Carletto, we lost twice and never looked like winning. You'll recall, Fernando's first fixture in blue was against Pool, and we all know how that turned out. He made Jamie Carragher look fleet footed. Yikes.

Want to know why I'm nervous? Well, our record over the last ten matches against top-tier teams has been atrocious. Don't believe me? See for yourself:

Squad Sheet: Chelsea enter the fray with relative health across the board. Although nothing has been announced regarding Didier's fitness, the speculation is that he'll find a seat on the bench for this one. Elsewhere, Villas Boas has everyone on call save for Michael Essien, who continues his lengthy rehab and is targeting a late January return. I remember Jose Mourinho used to be loathe to the idea of players competing against their old squads, but I'm sensing AVB has no qualms of this nature. In fact, he's all but established that Fernando is going to come out and lead the line, and frankly he should. Aside from Danny, he's been our second most 'in form' forward, generally speaking. And damn, that's really saying something about this squad at the moment. Kalou is on the side of a milk carton, Nico forgot to tie on his shooting boots the last 20 matches, Didier can't get out of the infirmary, and Romelu can't buy a minute at the moment.

I'd expect Nando to be flanked by a combination of Juanito and Danny, with a midfield combination of Franklin and Ramires. The third midfield spot is a bit of a bother for me, but after plenty of deliberation, I think you tip in the direction of Meireles. He'll be up for this one, knows how to play a pass, gets forward with more aplomb than Obi, and plays to AVB's desire to get into a more attack-minded focus from the beginning of the match. Plus, he seems to have a good sense of where Fernando likes the rock- so that combination at the very least looks like it could do something. Again, not exactly the most inspiring of sentiments, but I'm not going out on a limb too far right now. I need to see more on a consistent basis from everyone before I can say we've got anything in the way of rhythm. As for the defense, I'd opt for a back four including Cole, England's Brave, Bob, and Bane. Like dis: 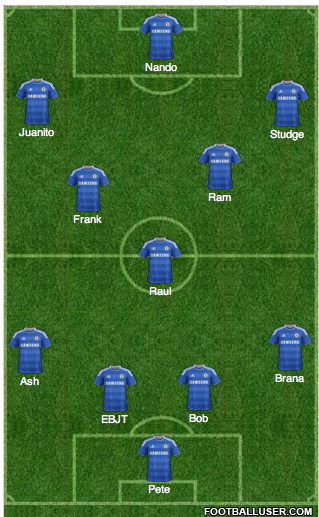 Them: Not taking anything away from Pool, but they haven't been in the best of form lately. The toiled to a bore draw just before the break to a Swansea side that gave them hell. Plus, they have a tough stretch ahead, with us, City, and a Carling Cup tie with us in the space of nine days. King Kenny, for all his brilliance, will naturally rotate the hell out of the squad. But, I'm guessing the team will be at close to full strength tomorrow, but it's anyone's guess as to who the midfield includes. With ickle Stevie G on the shelf, it's likely going to be a combination of Charlie Adam, Stew Downing, Lucas, and Dirk Kuyt, presumably supporting a pairing of Andy C and Luis Suarez. I'm not even going to try and guess what the defense will look like, but I'd suspect Daniel Agger and Martin Skrtel get calls for this one. While their form hasn't been aces this year, they've shown enough class to trouble a few of the better squads this year, including Manchester United (a team we've had our issues with already).

I'm already anticipating Suarez burning our defense at least twice in the first 45 minutes with a combination of speed and trickery, exploiting our high defensive line to great effect. Unless something amazing happened over this international pause period, we're still the same squad that plays it fast and loose. This will either work brilliantly, or explode in a blaze of glory. There's limited middle ground at the moment in the world of Andre, and he knows it. Liverpool can expect a Chelsea side that will increase the tempo and look to push on the counter as often as possible. Pool, conversely, will do pretty much the same thing. Or not. I really don't know what Liverpool side is showing up on Sunday (much like I don't know what Chelsea side will show up). Will it be the industrious side that held United to a draw at home, or the same side that got waxed by Spurs? They don't know either. But the same criticism, we know, can be applied to our squad. I'm cautiously optimistic- fuck that. I'm guarded as hell about this one. I just don't want to lose to Pool. I certainly don't want to draw with them, which leaves only one option. Win.

Look Fernando, you've had enough time to settle now. You've shown some bits and pieces but by in large, this has been a gigantic, and expensive, tease. It ever there was a golden opportunity to redeem your reputation in the eyes of the world, this is it. I'm done cutting you slack and done waiting for you to 'figure it out'. This week was the second time you've come out in the papers and said that you're anxious to pay the fans back for their support. So just get on with it then. No more curious red cards, mis-hit goals from three yards and in, and loafing through matches. Get the ball at your feet and force the issue. Take shots from distance, work the ball on the run, make plays for others, and use your speed to create space. Do what you used to do, and we have more than a fighting chance to get through this one. I'm telling you Fernando, this is your moment. Put the last year behind you and focus on what lies ahead- the opportunity to kick this season into high gear and reclaim your spot as an elite forward in world football. Don't you want that? We sure do, and we've waited for some time now. Give us a taste at least, just something to hold us over while you work through the kinks. Either way, don't let us down with this one. We forgave you last year because it was your first match in Blue, but not again. No, this time I'm expecting a performance. All of us, are expecting a performance.

They're certainly a bitch. So I'm refraining. I'm not going into this assuming anything good or bad. But, I'm going to admit that the first match after a break is always a pain to get past. Players are usually halfway back to their regular concentration levels, but this isn't a game we can afford to take lightly by a long shot. But, I'm confident that Andre will have the guys drilled and prepared for this one. Remember, while we've been waiting for the game to return, he's had two full weeks to diagram and strategize for this one. The tactician in him had to be nerd-ing out something fierce. I'm expecting he watched a lot of film, spent several hours in the office, and had a few late night phone calls with Robby D. I'll suspect there's an outside chance we try a new formation, but it's more likely we impose a wrinkle or two in our offensive and defensive schemes. All told, I'm frothing at the mouth for this one. It feels like a century since we have something to sink our teeth into, and this fixture presents the perfect combination of significance, drama, history, and intrigue.

Don't let me down guys. I need this. Carefree.