The case for/against finding a role for Hiddink

Share All sharing options for: The case for/against finding a role for Hiddink

Guus Hiddink is unemployed. He likes Chelsea, a lot.

So, is a return to London in some capacity other than manager represent good business for the club and Roman Abramovich? Yes and no. 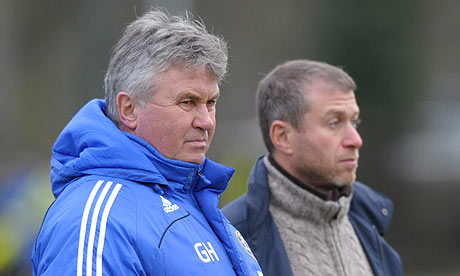 Hiddink resigned his managerial post this week following a turbulent near two-year spell in charge of the Turkish national team. Among his initial thoughts following Tuesday's 0-0 draw with Croatia - which confirmed Turkey's exit at the Euro playoff stage on 3-0 aggregate - were on Chelsea and a potential return to the club.

It was great at Chelsea, a terrific time, but that doesn’t mean I am ready to start tomorrow. I need some time to reflect. Even at my age I need to decide what my future may be.

I’m not ready to retire, I like to be involved with a team on a daily basis, but maybe I am ready to step out of the limelight a little bit, away from the cameras. Hopefully I will still be involved but perhaps it will be as an advisor or a consultant.

Not exactly a firm no. In fact, quite the opposite. The position that would seem to suit Guus' current ambition would be Director of Football. It's a job Guus was linked with in the summer, when most of the Chelsea managerial ramblings focused on Marco van Basten.

Sounds great initially. The question Roman and company must answer, however, is whether offering Hiddink such a powerful position is a move that will take the club forward rather than undermine it.

Let's take a look at both sides of the coin.

The case for Guus

The case against Guus

I'm sure I've missed one or two key points - for each side - but I think I've generally summed it up. Browsing the two lists, it becomes more and more apparent, at least for me, that appointing Hiddink as Director of Football would be the wrong move for the club right now.

I, like many of you, love Hiddink. To be honest, I expected him to become our manager in the summer. That didn't happen, however, which led to the proactive appointment of Villas-Boas. With AVB has come drastic change, a new look and new philosophy. Bringing Hiddink aboard now would potentially disrupt - maybe even destroy - what is currently taking place at the club.

Though we are not where we'd like to be, and there have been, and will be more, roadblocks to endure, there are massive ripples of change flowing through Chelsea right now and the end-product could be something incredibly exciting. I, for one, am ready to wade through these choppy waters in order to see where we eventually arrive. Allow AVB the time necessary to recreate his vision. I'd prefer the Portugese be able to do so without having to look constantly over his shoulder at a seasoned 65-year-old Dutchman in the process.

An unofficial advisory role for Guus? Cool. Consulting Roman from time to time on all aspects of the club? Cool. Anything more, though, and I'm leery.

What are your thoughts?