Danny Getting Abused By Our Own? Disgraceful

Share All sharing options for: Danny Getting Abused By Our Own? Disgraceful

By now most have heard the reports indicating that the club are investigating a member of our traveling 'support', who called Danno a 'monkey' during our away fixture to Genk. If you're like me, then you instinctively hung your head in shame and were bracing for impact. The blowback on this issue hasn't even fully formed. But you can imagine that the FA, FIFA, and every other governing body in the sport, including the Metropolitan Police, will be scrutinizing our every move. More, after the jump: 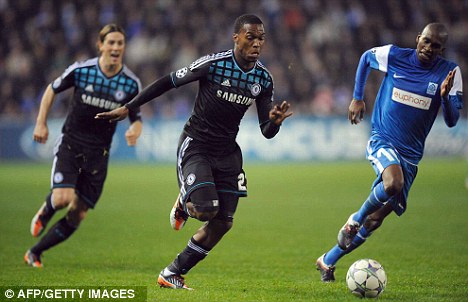 It's your worst nightmare

So we're deep in the trenches of the John Terry row, which has ostensibly been muted after a gagging order was handed down. That matter seems to be in the hands of the authorities who are taking their sweet time to review the evidence before making a decision- one that will have significant ramifications regardless of the final verdict. If guilty, John faces the very real prospect of having to hang them up for good. If innocent, he still faces the wrath of every away stadium crowd, the press, and those who will argue he got off simply because he's the captain of England. Either way, no win situation.

Then we have those moronic few who chanted against Genk "Anton, you know what you are". This wasn't a showcase of solidarity, let's not even try going that route. Why? Because solidarity, in this case, doesn't mean reciprocating allegations of abuse. You can support the player and the club without having to mouth off some incoherent babble about what Anton Ferdinand is- a shit footballer at that. You can show your intentions by simply keeping your trap zipped. But they didn't, and now the club are vigorously working to identify the brilliant few that had the bright idea to flex their right to free speech through veiled insults and racist overtones.

Now, we have another genius. A member of our Executive Club, essentially a wealthy fan, who thought it cute to compare Daniel to a primate, is being hunted with the quickness. The club, eager to put these racist sentiments in the rear view, and quite honestly, this six month stretch of bad press, has come out swinging suggesting that the end is nigh for this chap. Good riddance. I say, anyone foolish enough in this day and age to say absurd things of this sort, John included, should be punished. This is the ugly business, the dark side, the part of the universe at large that nobody wants to admit still exists. We can go through a million Civil Rights movements, but ultimately, factions of the globe harbor deep resentment, racist thoughts, and a general dislike for ethnicities beyond their own skin color.

I won't even for a second try to argue that any of these people were right. They were wrong, so damn wrong, that there has to be a punishment to fit the crime in question. And trust, I know there will be appropriate measures in place to execute said sentences. But the bigger concern, for the club, is finding a way to get the public eye off these matters and back onto the business occurring on the pitch. And more importantly, rooting out the remnants of a bygone era of hatred has to be paramount. If we're ever to become a club that can hold it's proverbial head high and be proud of our impact on the global community at large, surely we cannot have fans mouthing off in this context? Surely, players of color will see this and think maybe SW6 isn't where I need to be? Just spitballing, but there will be some fallout from this.

To what extent, I hardly know. But stay tuned, because you can bet this isn't a small matter. None of these, frankly, are.