Poll: Would you sell Drogba and Anelka in January?

Share All sharing options for: Poll: Would you sell Drogba and Anelka in January?

There has been much talk recently about the futures of Nicolas Anelka and Didier Drogba, both of whom will see their contracts expire in the summer. Former Chelsea and AC Milan manager Carlo Ancelotti, for one, has talked up both players as potential targets for Milan, saying he could see them "fitting in very well" at the Italian club.

Milan vice president Adriano Galliani this week agreed with the evaluation. The question is, however: Would it be in Chelsea's best interest to cut go ahead and cut ties with the two midseason? 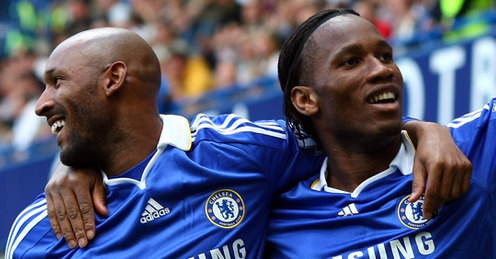 Milan are in somewhat of a stretch at the moment, having lost the mercurial Antonio Cassano for the better part of six months because of heart surgery. A truly unfortunate incident to be sure. Still, Cassano's absence presents a massive problem for the Rossoneri up top. The addition of Drogba and/or Anelka would certainly help alleviate the burden placed on Zlatan Ibrahimovic and Alexandre Pato.

Both players would also appear to be available (at the right price of course), neither exactly showing great form or settling seamlessly into our new-look, Villas-Boas driven Chelsea. Neither, also, are considered definitive first-team selections at the moment. So, with that being said, it makes sense for Milan to make an inquiry.

In response to Ancelotti's recent comments, Galliani offered this assessment:

Ancelotti understands football. Perhaps we will take them both.

Seriously, it is not certain that we will sign anyone in January. If we did it would be a loan because I promised to keep a place for Cassano. Anelka is a major player but I have been in love with Drogba since he played in Marseille.

Now I certainly don't think the club should be looking at moving forward with loan deals for these players. Paid in full (Rakim son) or move it on, Andre. And also, let me clarify, I'm not certain I would move either player at this stage. But you must admit it's an attractive option for us as a club looking to reshape itself a younger, more technique-driven side. Of course, if either - or more significantly both - were to move a suitable replacement would be necessary.

As for who that replacement could be, take your pick. We've been linked with just about everyone under the sun - Edinson Cavani, Robert Lewandowski, etc. etc. I dreamed last week Lewandowski made the move to London (weird). This is a conversation better suited for a separate thread.

For now, let me know what you think of selling the legend that is The Mighty One and Nicolas Anelka as early as January? Both? Neither? We want to hear what you have to say. As always, be sure to provide us with an explanation in the comments section below.

We'll be back for some spirited debate later on. Until then, KTBFFH