Boring, boring Chelsea. I reckon the talking heads can go ahead and euthanize that once trusted, but now extremely tired - and inaccurate - saying. We have been anything but boring this season - for good and for bad.

Saturday? Bad. Really fucking bad. Somehow, some way, in a match that defied all logic, Chelsea managed to put together a 45-minute performance of such dire abjectness that it hadn't been seen by these eyes before. A 5-3 loss to Arsenal. At Stamford Bridge. Tell me I'm dreaming. 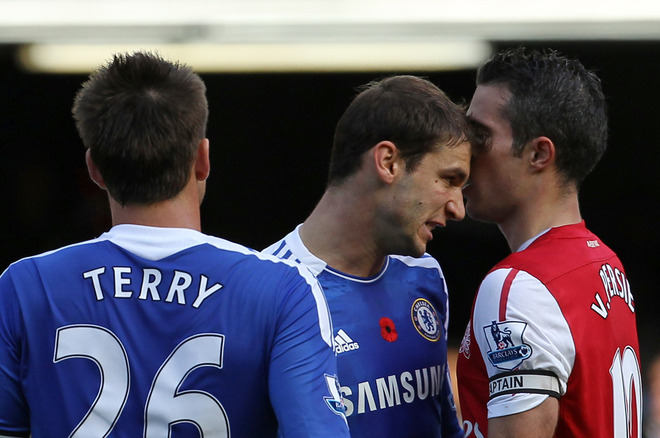 Some bite - where was this defensively?

I wasn't. None of us were, unfortunately. This so-called clash of titans (yeah, sure), on the eve of Halloween, was a bloody nightmare. I'd as soon be consumed by my own bed than watch that second half again. Yes, it was that egregious. You and I both know it to be true.

The Rundown
• We lost in historic style (not since 1989 had we conceded five in the league at home).
• Never during the Roman era have we been that poor defensively.
• Jose Bosingwa is who we thought he was. Taxi, por favor.
• Individual errors are fast becoming the norm with this side. Must be dealt with vehemently.
• We've conceded 15 goals this season, as many as we did in the entire 2004-05 season. Wow.
• Robin van Persie has 28 goals in 27 games. The man's pretty damn good.
• Neither of these clubs is a title contender on this evidence.
• We will recover. Trust the Villas-Boas.

I don't think any of you want to revisit this match. Recapping the rubbish would be doing you all a disservice. So, with that being said, let's just touch on a few choice cuts that I highlighted during the viewing.

Are we the new Arsenal?
Absolutely disgusting thought, I know. My best friend was the first to point this out to me immediately following the match. As mentioned on Twitter, I threw up before he could finish his argument. But, after thinking about it for a minute or so, I think he's got at least a shaven peg leg to stand on.

Anyone watching the match would've noticed how much more direct Arsenal played against us. This compared to their usual tiki-taka, pass it into the net approach that has served us so well over the past few seasons. Of course, it wasn't full-on direct play - as Arsenal still had some of those vintage buildups - but a lot of their success offensively came via the counter attack, a very obvious way to best make use of their extreme pace.

To further solidify this painful point, we actually out-passed Arsenal (539 to 504) and a majority of our shots came from outside the penalty area (seven of 13). Meanwhile, all five of Arsenal's goals were scored in the box. Sick.

Do I think we're the new Arsenal? Hell no. That's not to say this isn't an alarming trend, however. I fully expect Villas-Boas to make the necessary adjustments and for us to see immediate results.

How high?
No, not the film. The song? Maybe.

Anyway. A lot of people, supporters or no, are laying much of the blame for our performance at the feet of Villas-Boas' high line. Much of it is unwarranted.

Sure, it contributed to our problems. Arsene Wenger clearly attempted to exploit the high line by playing simple balls over the top of our defense. It worked on several occasions, but much of our issues - and the concession of goals - came via a combination of individual mistakes and improper pressing of the ball.

Individual lapses were directly responsible for three goals. The goal from fullback Andre Santos - who was an abomination in the first half - that brought Arsenal on terms, at 2-2, came after we first mucked up a throw-in, then from Bosingwa completely falling asleep. Daniel Sturridge attempted to get back to apply some pressure to Santos, but simply couldn't make up enough ground. Petr Cech might have done better on the strike as well.

Then there was Theo Walcott, who was allowed, astonishingly, to slip, lose the ball and pull himself back up in what looked to be one motion. All this occurred as the ball chilled on the pitch with three Chelsea players within a foot of it. Did any of them decide to clear? Of course not. Theo, probably perplexed, jumped up, grabbed the gift and slashed a shot past Cech at the near post. Unbelievable.

And, lastly, there was the wretched backpass from Florent Malouda and the comedy slip from John Terry. That's three easily preventable goals had Chelsea played like an actually Premier League football team rather than a bunch of part-time pubbers. Ridiculous.

Arsenal's opening goal, meanwhile, came after a defensive positioning breakdown when John Obi Mikel, I believe, lunged into a tackle at midfield. The result was Aaron Ramsey having the time and space to slip in Gervinho through the middle who in turn laid off to van Persie. Elementary stuff.

So, as you can see, it's not so much the high line as momentary bits of incompetence that cost us on Saturday. 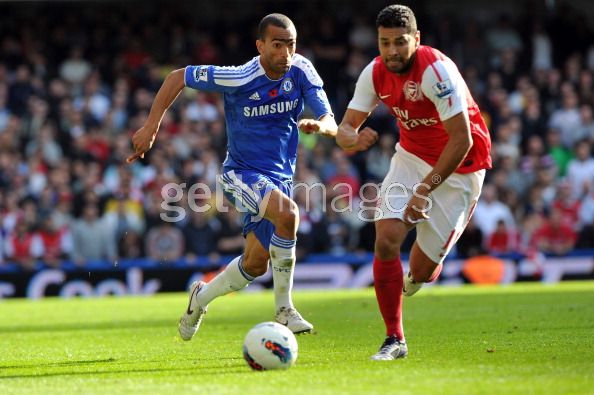 A call for a proper fullback
Jose Bosingwa was a massive hit with the fanbase in the early days of this season.

Some crosses that actually found teammates. A bit of above average defending found its way into his displays as well. He was, dare I say it, competent for a change.

The real question though should have been: Is he good enough? And the answer should always be a definitive no. When one compares Bosingwa's performances this season (most of them) to last season's combination of anonymity, non-existence and overall woefulness, he almost always will look elite. World class even. He was just that bad last season - unfortunate for him in some respects due to injury.

But still. He was bad, just like he was Saturday.

The man is an average winger with some decent trickery playing as a fullback. That's never going to cut it. He's lazy in tracking back (Ashley Cole isn't immune to criticism in this aspect looking at Saturday's game), and has always been prone to playing a cross straight out of play rather than toward a teammate.

It's time for the club to move on. For us to challenge in the competition we want to, an upgrade is a necessity. There are options out there, most of which have been discussed at length on this blog. Villas-Boas knows what's up, you can bet on it. I reckon he already has a replacement lined up. I hope he does.

Have faith
I don't think I can accuse of any of you as being fickle individuals. No one here is calling for Andre Villas-Boas' head - and rightfully so.

We all knew that with his appointment would come a transition period. The man, as intelligent and savvy as he is, remains very inexperienced at this level of the management tree.

More to the point, Villas-Boas is in the midst of a semi-revolution at the club. He's attempting to give us not only a new style of play, but also a new identity. That's a massive undertaking, and there were always going to be speed bumps along the way. The mix of veteran and youth at the club isn't going to do him many favors, either. It's mighty difficult to change the mindset of established internationals.

He's working hard at making it all happen, you can tell. We must give him the appropriate time to work his magic. And, you know, I expect the club's hierarchy and us supporters to do just that. Yes, Saturday was truly an awful day but, remember, those kind of days are of the rarest variety. We'll be back, and with a vengeance. KTBFFH