In Part One of the post mortem we had a look at the concept that's copping the most flak for our terrible defeat at the hands of Arsenal - the high line, as to address some of the issues that a lot of Chelsea fans are concerned with currently. In this piece I'm going to have a look at the rest of the game and see what else went on in that shambles.

In the past Chelsea have been set up around the nucleus of a strong defence and a powerful counter attack - however Andre Villas-Boas has refined this system to a more patient, possession-based passing machine revolving around the creativity of Mata. Normally Chelsea has had the better of Arsenal during this time (apart from the 3-1 loss at the Emirates). This was addressed by Wenger pre-match, and one may have taken that as a hint that his side might take the route Chelsea normally did against them in the past.

This seemed to show true in the final result, where Chelsea had 52% of the possession but Arsenal came away with the result. We actually out passed Arsenal, somewhat "beating them at their own game". However Arsenal weren't totally counter attacking in an Ancelotti or Mourinho vein - they still played quite high up the pitch and attempted their trademark passing moves. The bulk of their successful attack was however ultimately counter-attacking.

Yet in clear contrast to this tactical feature is the Guardian Chalkboard for Arsenal's shots. All but one were inside the box, and all five goals came inside the penalty area. This can be attributed to the fact that Arsenal continually bypassed Chelsea's high line (at the fault of the poor pressing)

On the other hand a lot of Chelsea shots came outside the area, and while the chalkboard doesn't show it, they had a lot of chances from the flanks where the final ball was just lacking. Koscielny in particular had a very good game - him and Mertesacker limited the space for the Chelsea midfield to work their way through. The midfield also pressed very well, restricting us to the long range efforts.

It was clear from the beginning that Chelsea were going to target Arsenal's obvious weakness - the space in behind the full backs and the full backs themselves. This was done to great effect early on, with Ashley Cole at the heart of strong Chelsea surges. However Arsenal managed to recover with help from the wide attackers dropping deep.

Surprisingly for a 'big game', the midfield struggled to control the ball at all, and many times the game just flowed from one box to the other. While this made for entertaining viewing, it didn't help either side in their defensive patterns. A common feature of the Chelsea game is the Barca-esque modification of the holding midfielder - dropping in to make a back three, allowing the full backs to push forward.

Okay in theory, but in execution Chelsea ended up having their three defenders facing Arsenal's three attackers, and the full backs were lazy in tracking back. Against a counter attacking side, two pacy wide men and a striker in the form of his life - it was equal to suicide.

As Zonal Marking has noted, no one won the overarching battle, just a series of minor victories and stalemates - the midfield battle was non-existent, Chelsea's fullbacks were outpaced and Arsenal's fullbacks were positionally poor. 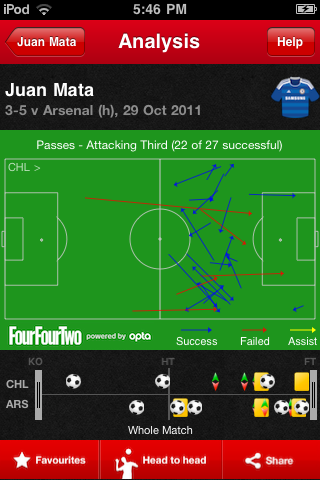 Mata dropped in a lot into midfield to restore the balance, but it meant he was often closed down quickly by Song and Arteta, and although he had a very good game, some of his passes lacked their usual thrust.

This lack of thrust accounts a lot for Torres poor game. With only two shots in the entire game, he failed to properly close out the critics of his expensive transfer after showing signs of life with four goals in as many games.

He was bright in the opening minutes when Arsenal were open, and should have had a goal had Sturridge had quicker decision making.

Being starved of the ball isn't necessarily enough of an excuse to drop deep though. In a frantic game like this one, having one sit off the last defender could have made a big difference.

At times Chelsea's attack struggled to get started, and this can be attributed to a lack of running behind the defence - in stark contrast to the clever movement of Gervinho, Van Persie and Walcott. In this sense, Torres has some work to do before one can call him a fully integrated member of Villas-Boas's Chelsea.

Individualism reigned supreme in another crazy game. Individual mistakes, individiual performances and individual moments of magic all accounted for this insane storyline. It would be very premature to declare either Chelsea or Arsenal out of the title race, however both sides have much work to do. Defending is part of the game, and learning to collectively press must be top of Villas-Boas's list. Arsenal on the other hand need to work out the individual problems, for their collective press is working well.

Like Manchester United and Arsenal themselves, this is rather a needed wake up call than a fatal wound. Accounting for the squad's strengths and weaknesses at present rather than having too much of a glassy eye on the long term identity and future of Chelsea is an important lesson that Villas-Boas would do well to learn.